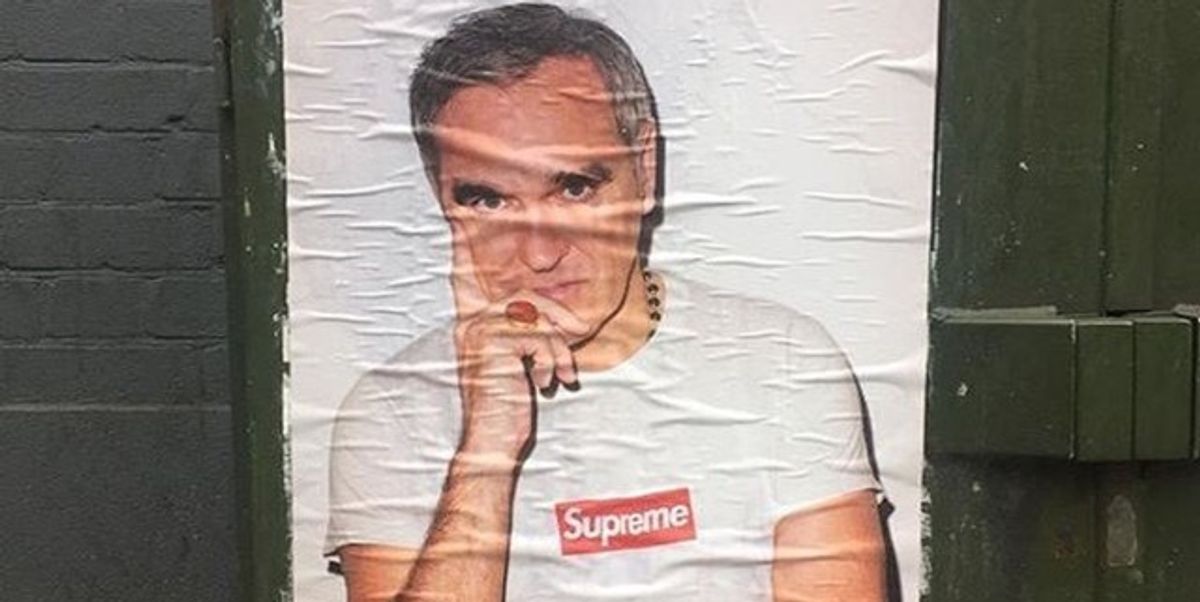 Professional curmudgeon Morrissey has appeared in a set of Supreme ads pasted across the globe, and apparently he's not all too happy about it, thanks to the brand's apparent relationship with "the beef sandwich pharaoh known as White Castle".


Issuing a short apology on True To You (subhead: A Morrissey Zine), Morrissey effectively denounced the photos and is generally distancing himself from the streetwear brand via vehement pleading.

I apologize enormously for the enfeebled photograph of me issued this week by Supreme. The shot was taken in October 2015. I considered the photograph to be fit only for a medical encyclopedia and I pleaded with Supreme not to use it. This was before I learned that Supreme were sponsored in part by the beef sandwich pharaoh known as White Castle. Supreme were issued with a legal caution not to use the photograph and their fee would be returned. Evidently Supreme have ignored my lawyer. No safety within the corridors of law. Ugh I offer excessive apologies for this association. Shame is indeed the name.


However, Supreme is singing to a different tune -- or at least according to a statement posted to their Facebook page over the weekend.

Regarding Supreme/Morrissey:In July of 2015 Supreme approached Morrissey to participate in one of it's poster and...
Posted by Supreme on Saturday, 13 February 2016

To which Morrissey responded via his zine again. In a post titled "Supreme, yet not", no less.

As a matter of fact, I do not have, do not want, nor do I need, any money from the company called Supreme. If Supreme have sent money in my name then they could track it down and reclaim it - if they had NOT printed that photograph of me for their 2016 campaign. By running prints of the photograph they have derailed their own negotiations. This is why they are angry. The photograph is dreadful and will help neither myself nor Supreme. Who needs it? Nobody. Supreme were warned by my lawyer and accountant that the photograph should NOT be used. Supreme ignored this advice. Hence this mess. I write these statements because there is no one else to write them. The joy I receive from such statements is non-existent.

What a Charming Man, huh?