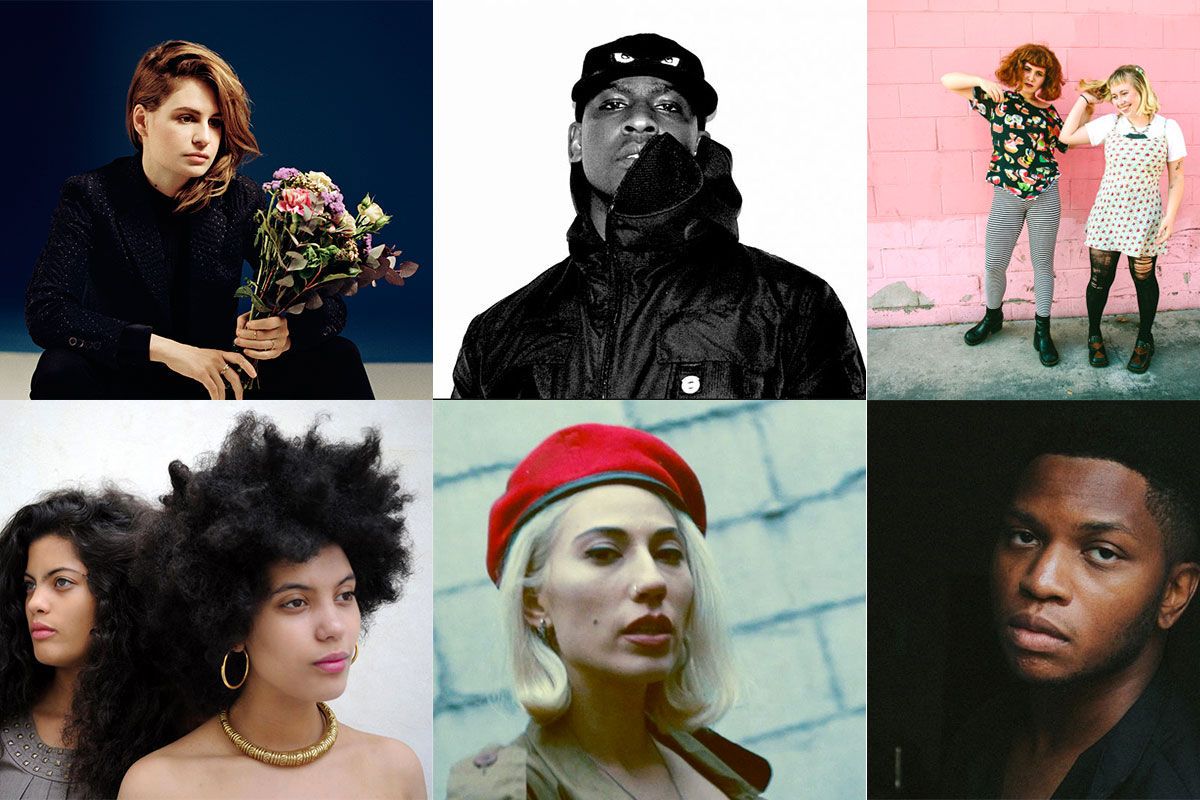 The Rising Acts You Have To Catch At Coachella 2016

Get those cold-cut flower crowns ready cause it's Coachella season once again and we know it's hard to keep up with who's hot, who's not and who the fuck is in the tiny font at the bottom of the line-up flyer. Because while y'all like to groan about the evil corporate entities that rule festival culture and how this year's line-up is worse than having your nightmares soundtracked by Appetite For Destruction (true story), there are a few new artists worth getting excited for. So if you have a weekend pass and an acute case of decision paralysis when it comes to set scheduling, we did the legwork for you and narrowed down that massive line-up to the "can't miss" rising artists this year.

R&B singer Gallant has one of the smoothest croons we've heard in a long, lust-lorn time, a soaring voice that in its weightlessness channels some major 80s vibes without sounding tired or overdone. No wonder this rising star who writes on the edge of acute anxiety has already caught the ear of everyone from Seal to Sufjan.

Superstar MC Skepta is bringing his gruff twist on grime stateside with his very first Coachella performance, and it's bound to be a mind-meltingly good show. The undisputed king of grime, he's the chap bringing it all back to the early, high-energy golden days of the genre, so you know that this Drake-approved dude is bound to "Shutdown" this shit.

Avant-pop wunderkind Låpsley is one of XL Recording's newest signings and an undeniably talented songwriter with Adele-levels of star potential. Known for her unkempt compositions and organic instrumentation that softens the distended synthwork that lays the ground for a lot of her tracks, she's the future of UK electronic music and a name you're better get accustomed to stat.

Ibeyi is a duo of two French-Cuban twins who make incredible downtempo electronica that's mired in a stew of raw soul and Afro-Cuban jazz influences. Emotional and innately spiritual in their leanings, it's a transcendental experience to see these two perform live and one you'd be sore to miss.

Ferociously, unapologetically and whole-heartedly punk in their bratty, hook-laden glam punk, Sheer Mag manages to pack a wallop of a punch into every hour-long set. Distilling all their energy (and believe me, there's a lot of it) into a string of potent, politically-charged songs that'll leave you positively reeling post-set.

Not 100% sure why Christine isn't a bonafide pop star yet with that stadium-ready voice and a knack for producing beautifully wrought synth-pop, but we're kind of into keeping the bi-lingual French songstress our little secret. An empowering, electric performer with an origin story that involves queer clubs, the London drag scene and more, she's an eclectic and positively addictive force of nature.

Barnett makes the kind of grungy psychedelia we'd consider "festival music" at it's finest. Smart, unpretentious and acutely observational, she has a gift for turning the ordinary into the extraordinary and her live set's no exception.

Imagine 70s power pop infused with an essence of 90s riotgrrrl and a dab of troubador Americana, and you've summarized Ex Hex's vibe in a nutshell. Reverb-drenched, undeniably infectious and immensely singalong-able, their music projects the kind of freeing, hair-whipping candor best suited to outdoor summer stages -- needless to say, all you Coachella-goers are in for a treat.

It's time to call it off, bbs, because Shamir is here to smack some sense into you. Namely through his effusively fun, genre-bending set that elevates left-field pop into something candid, bouncy and surprisingly confident for one so young. A must see, always.

Even the Times acknowledges Clark as one of the greats by calling him "the most acclaimed bluesman of his generation", and while that may feel like a sweeping statement, where is the lie? More than just a "blues revivalist," Clark is reclaiming the genre by spinning his music into something that's controlled, cool, and takes cues from his parsing of contemporary hip-hop.

The first woman to ever be signed to Top Dawg Entertainment, SZA is a force to be reckoned with. And we can see why, as she touts an undeniably seductive voice that layers itself atop gorgeous, gauzy basslines and soft-focus synthwork. Some great midday chill vibes, for sure.

Marea Stamper aka the Black Madonna is a Chicago house staple, an artist with an encyclopedic knowledge of electronic music and the indelible energy of a fresh-faced bedroom producer. Crafting sets that blend old school Trax classics with more peculiar, contemporary cuts that range from obscure disco edits to goth-y techno you'd expect from a Berghain resident, hers is definitely a show for the heads out there.

Dr. Dre's much-lauded apprentice is gracing the festival circuit with his agile flow, lax production and a profoundly West Coast sensibility that makes you just wanna groove. An apt storyteller (with a lot to say), he's earnest, forthcoming and at times uncomfortably honest, which, we all know, makes for some of the best art.

The first Korean group to make it to Coachella, this trio of bilingual rappers may have a huge following in Asia, but they continue to remain relatively unknown in American mainstream music. However, their fondness for sawtooth, leftfield dance beats and a pensive, gloom-ridden attitude make them a strong contender for "most intriguing" festival first timer.

Washington may be best known for providing the saxophone "funk" that made Kendrick Lamar's To Pimp A Butterfly really pop, but the composer/musician is a must-see for his massive, generational-defying spin on soul jazz that many have simultaneously compared to Sun Ra and Coltrane. Even those of you who find the above genre "meh," will be impressed with this virtuoso's skill -- we promise.

This young duo oscillate between an angsty post-punk jive and the sort of starry-eyed indie pop that kind of makes you just want to curl up and feel some feels, but genre-driven, stylistic inclinations aside, they're really, really, really good. Imbued with an attitude of pure romanticism coupled with youthful anxiety, they're also bound to be a nice change of pace from the Zedds and Death Grips of Coachella.

Tei Shi is an artist whose oeuvre centers around an initial shyness that alludes to hidden strength and an undeniable undertone of seduction. An incredibly talented, tender songwriter that's moved away from acoustic-only productions, we're excited to see her take her bedroom-inspired productions to Coachella's stage.

Okay, gonna finish this list off with an eye-rolling personal anecdote (sorry). I saw ruckus-inducing Scottish hip-hop trio Young Fathers back at a festival in 2013 -- but I was skeptical when I got there cause I was a crowd of one, and it was three dudes, a laptop and one snare on stage. Then they started playing and I proceeded to go nuts and get my nose ring punched out alongside the 50+ passerbys who ended up stopping to watch because they are that good. Seriously.