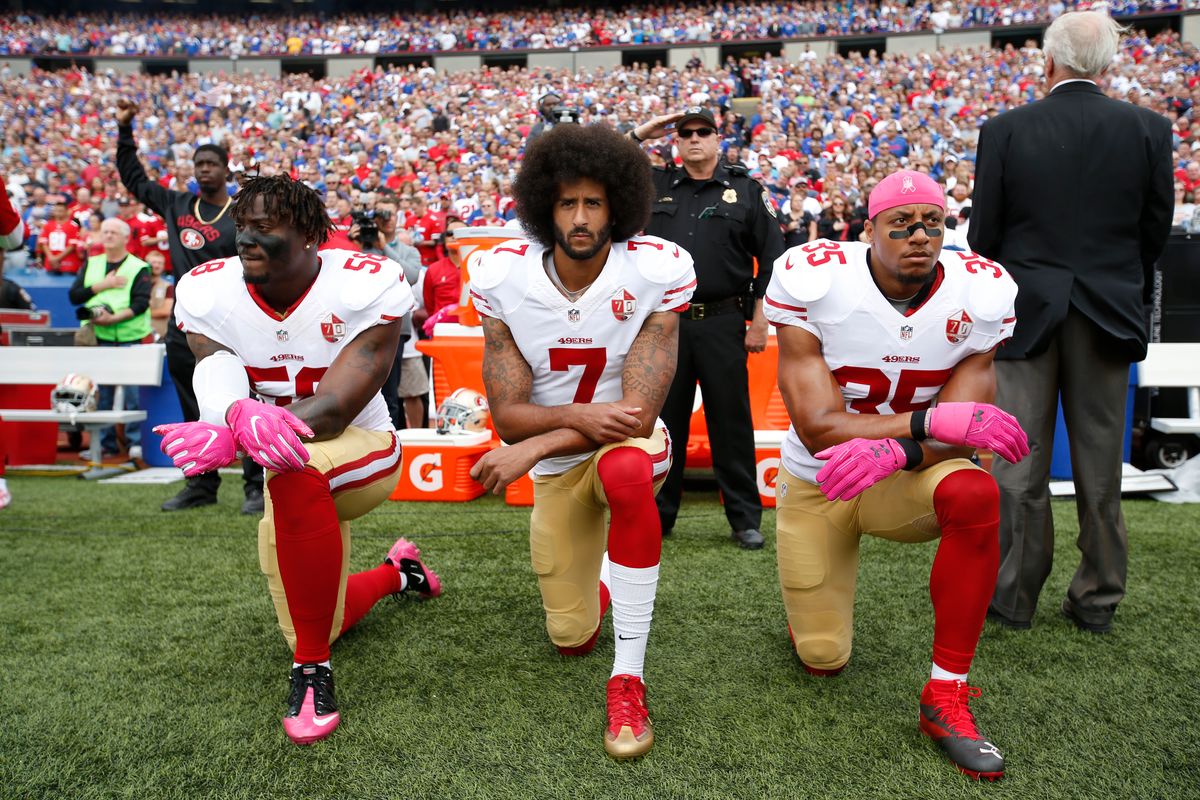 The Problem With the NFL's Apology to Colin Kaepernick

Four years after he was first blacklisted from the NFL for protesting police brutality on the field, Colin Kaepernick has received an apology. Sort of. He's not mentioned by name, but on Friday, NFL commissioner Roger Goodell nodded to him in a Twitter statement declaring the league's support for the ongoing protests against police brutality, and regret for "not listening to NFL players earlier."

"We, the NFL, condemn racism and the systematic oppression of Black People," Goodell said in a lo-fi video shot from his basement. "We, the NFL, admit we were wrong for not listening to NFL players earlier and encourage all to speak out and peacefully protest. We, the NFL, believe Black Lives Matter."

The post is on trend. Nearly every American brand and corporation has issued a statement of support for racial justice, opening the floodgates for consumers and employees to call bullshit, outing companies for internal and external racist practices. It would appear that the NFL is in a slightly unique situation. Unlike brands like Reformation and Bon Appetit, the NFL's racist practices are already in plain view, and nine NFL owners are donors of Donald Trump, who suggested the military gun down protesters in the street. During the 2017 kneeling protests, the President also urged the league to fire any "son of a bitch" who takes a knee.

While the statement is a stunning pivot from the NFL's stance four years ago, all we can really be certain of is that the NFL now considers its treatment of Kaepernick and silence on the protests a greater liability than publicly expressing support for the Black Lives Matter movement. Like all brands, these expressions of solidarity are more a reflection of what customers now find acceptable, than anything else. Case in point: although the NFL has admittedly, and to their credit, enraged Trump, the statement only arrived after increasing pressure from Black and white players alike.

Could it be even remotely possible that in Roger Goodell’s rather interesting statement of peace and reconciliation… https://t.co/lkPVsF3SLr
— Donald J. Trump (@Donald J. Trump)1591588483.0

A day before Goddard's statement, a group of Black NFL players including Deshaun Watson, DeAndre Hopkins and Tyrann Mathieu independently created a moving video called "I am George Floyd" demanding the NFL take the protests seriously and "listen to their players." Following the statement, the official NFL Twitter account reposted the video with the caption, "Players, we hear you." Since then, the NFL has taken to posting quotes from Black players on racial justice and photos of them participating in the protests.

Also leading up to the NFL's new progressive stance was New Orleans Saints quarterback Drew Brees' apology for his previous statement that he could "never agree with anybody disrespecting the flag of the United States of America." After receiving backlash from the likes of LeBron James, Brees made an unexpected apology. "I made comments that were insensitive and missed the mark," he wrote on Instagram, saying he now stands with "the black community in the fight against racial justice," realizes he "should do less talking and more listening," and acknowledges that "Americans, including myself, have not done enough." Brees, too, is now facing Trump's Twitter thumbs, but he isn't caving. In a post addressed to Trump, he wrote, "I realize this is not an issue about the American flag. It has never been. We can no longer use the flag to turn people away or distract them from the real issues that face our black communities."

Regardless of the NFL's sincerity, many won't take its apology seriously until it makes moves to un-blacklist Kaepernick and get him signed to a team. Like so many brands, empty gestures of allyship, rolled out when a brand needs to save face, just won't cut it anymore — even if they're shockingly progressive for an institution like the NFL.

Kaepernick hasn't wasted a second of his time off the field. His organization Know Your Rights Camp, a Black youth empowerment initiative modeled on the Black Panthers' Ten Point Program, has become a major player amidst the protests and the pandemic. The platform has raised hundreds of thousands of dollars in direct relief for Black communities affected by the pandemic, and launched a legal defense fund to bail out protestors.

Correction: An earlier version of this article incorrectly referred to Brooklinen among brands that have come under scrutiny for racism.