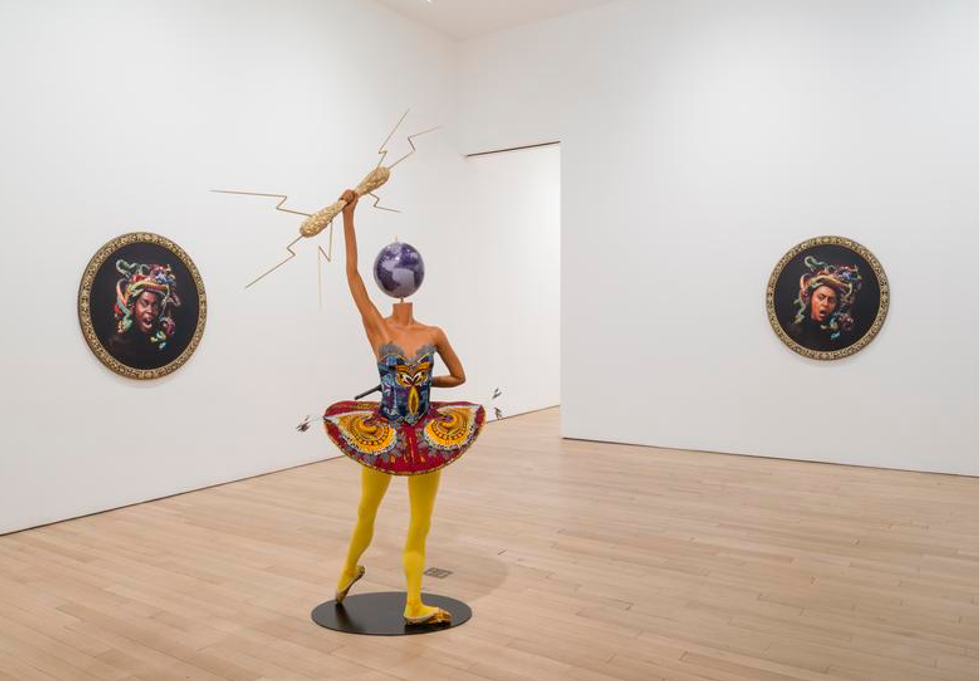 "The Party Has Arrived!" Everything We Saw and Heard at Last Night's Art Openings

by Kate Messinger
PAPERMAG
Pieces from Yinka Shonibare MBE's Rage of the Ballet Gods at James Cohan Gallery
Spring in New York is quite possibly the best time to see art. Not only because the parks look like a hazy Monet with puffy blossoms, the white wine at the galleries is exactly what you need on a golden Thursday night, or a host of big-ticket openings and art fairs are around the corner, but also because after the longest winter, we can actually enjoy lingering over art again without dreading our first steps back outside.

At The Kitchen, a gallery and legendary performance space, artist Maria Chavez was standing in a tight cheetah print dress welcoming friends into her site-specific installation Sound Bleed. Inside viewers were quiet, surrounded by a large white curtain lit from behind. The sound of muffled movement and speaking echoed in the room, and we looked around for its source. It sounded like we were missing out on something, but all we could see was whiteness. Chavez had recorded the Kitchen's performances from the second floor and played them back in the vacant room, prompting attentiveness and then anxiousness. It was either the sounds of something happening somewhere else or the FOMO of the other art events beginning to pick up in the neighborhood, but we had to see where the action was.

From all white to black and white at Paula Cooper Gallery, Bruce Conner displayed collage, sculpture, and  photography of the San Francisco punk scene with bands like DEVO. It all pulsed with morbidity and an urge for destruction. Looking at the photographs, I glanced over and saw a man in his sixties in a tight teal suit and thick rimmed glasses. He seemed familiar like an old teacher or a friend's dad or maybe that guy in the leather jacket screaming on stage in the picture. Did these people used to party with Bruce? Was that Mark Mothersbaugh looking at himself onstage 30 years before? The punks of the 21st century arrived so we didn't wait to find out.

At Skarstedt Chelsea the collegiate art world reigned. David Salle's large paintings were invigorating, colorful pop art renditions of Americana food with a dash of abstract figures, begging to be dissected. But the crowds were looking at each other instead of the walls. The wine was getting low, so we headed to James Cohan Gallery for Nigerian-British artist Yinka Shonibare MBE's Rage of the Ballet Gods.

You know you're at the right gallery when the rosÃ© flows freely, everyone is Instagramming incessantly, and that art world dignitary who wears the tie that looks like it's always being blow up in a storm is there. The collection of ballet dancing mannequins with globe heads and portraits of screaming people with Medusa headdresses tugged between a mythological whirlwind beauty and an underlying environmental instability. The artist, wearing similar African fabrics as his sculptures, signed books and talked with the patrons, many of them dressed as brightly as the work around them. There was a buzzing around the space that we hadn't felt in past weeks, like a tickle before a cough. People seem ready for something. A small man donning sunglasses, a caftan and two different shoes, all in neon green, walked in and declared -- while taking a long drag of his glittery Vape pen -- "The party has arrived!"

It's true. The memories of winter have thawed, the future is bright. And with the flowers and translucent ankles that have finally come out of their dark homes, the weirdos, too, are ready to party.