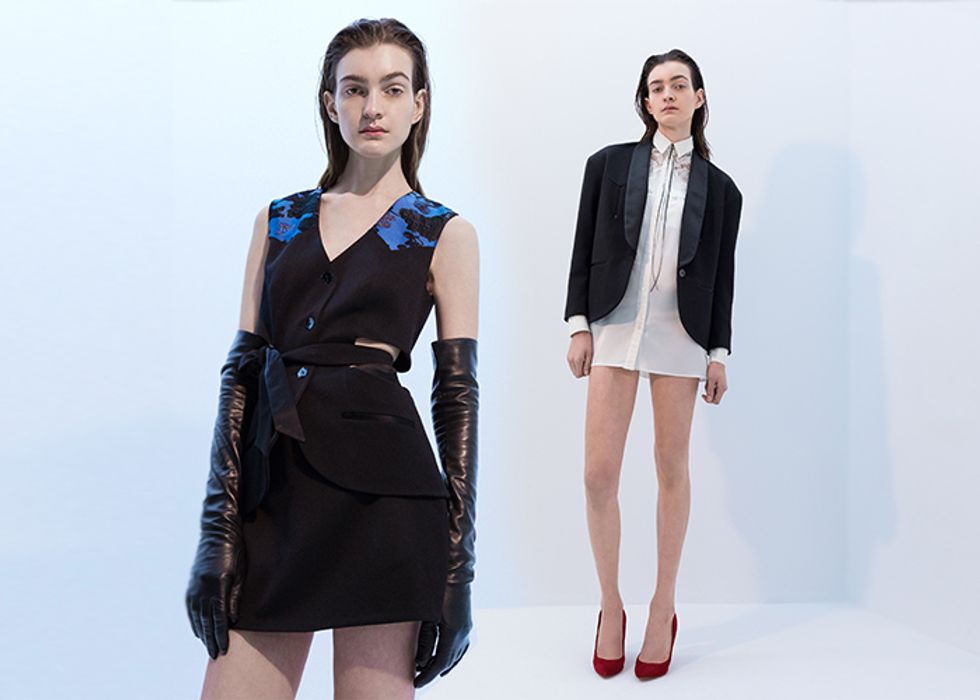 Aside from the fame of the Six, Antwerp's fashion stardom is largely due to the sterling reputation of the Royal Academy, where Walter Van Beirendonck is artistic director. With a highly selective admission process, the Academy draws talented fashion students from around the world for its conceptual take on garment creation. And as home to several luxury houses, the city just north of Brussels has become a hotspot for young fashion creatives, retaining many Academy graduates who choose to remain in the city when their studies are over.
â�¨
Below, get to know six rising stars from the Antwerp scene.

"Belgian fashion is about individualism," says the Brussels-born designer, whose rich, layered graphics combined with elegant knitwear are simultaneously subtle and outstanding and A-line skirts paired with over-sized cardigans take on a new look under his eye. It's a delicate hand that caught the attention of Dries Van Noten, who named Wijnants' graduate collection from the Royal Academy 'Best Collection' in 2000 before taking him under his wing in Antwerp. From there, Christian went on to work with Angelo Tarlazzi in Paris before he returned to Antwerp to launch his eponymous label in 2003. Having already sold his collection to more than 100 boutiques worldwide, including Barneys and Harvey Nichols, the designer will finally get his own flagship in Antwerp in September.

"Antwerp has a rich history and I love the city. It keeps on inspiring me." -- Christian Wijnants

"There's a nostalgic greyness," to Antwerp that inspires Wim Bruynooghe, who grew up in the nearby coastal city of Ostende. Both cities have an openness that comes from their location directly on the North Sea.

With a palette of blues, grays and neutrals mixed with ruffles that tumble down from the shoulder or waist, the rough and tumble influence of the North Atlantic is  apparent. While the label is still relatively new, the recent opening of a flagship in Antwerp has held the buying public's attention in a fast-paced industry. "Creating a hype around a sweater seems way too easy and that's not what fashion should be about. We prefer instead to create a world."

A small, one-woman shop, Toos Franken took a non-conventional path to launching her line in 2014. After working as an assistant in the pattern ateliers at Ann Demeulemeester and Haider Ackermann, Franken enrolled in a two-year patternmaking course before branching out on her own. These experiences as a patternmaker shine through in her womenswear, the entirety of which she still makes by hand. In her first collection, she produced about 150 individual pieces of about 30 styles; each piece feels, then, one-of-a-kind, which fits well with Franken's design philosophy.

"You should buy clothes because you love them and not because you want an excessive amount of them. It costs a lot of money to buy handmade in Belgium, so I don't want them to be worn out in a year or that people will recognize it as something from a previous season. They will stand out a little bit but I want my jacket to be something that you can keep for 20 years and then give it to your granddaughter."

Growing up in the shadow of the Antwerp Six shaped Cedric Jacquemyn's understanding of fashion entirely. The group's influence is seen not only in Jacquemyn's designs, which rely heavily on draping to create sophisticated urban menswear looks that layer well, but also very much determines the way his business has developed since its inception in 2010.

"I've always been interested in Belgian fashion and in Antwerp. There's a focus on smaller, more independent fashion brands. If you look at Belgian fashion labels, there's always this quest for being free and though your life or your label may get more serious, the strength of the Royal Academy is that it forced creative thinking, which in turn becomes a reminder of your freedom. Doing what you believe in means it takes longer to get off the ground."

Still, Jacquemyn remains confident about the trajectory of Belgian fashion. "For the first time in Belgian history, you have labels who are no longer being designed by Belgians but all the labels stay true to themselves."

While that's true of his own designs, over the last five years, Jacquemyn says his label has changed very much on the business side. Having already shown in Paris, London and Copenhagen, Jacquemyn has decided to sit this runway season out in favor of gaining a closer connection to the wearer and concentrating on the more personalized sales approach. "We make the prototypes in my atelier by hand but work with Belgian production companies. It's important for us, then, to find more stores that are focused on quality, on the handmade garment. Shops becoming more like galleries is the future of fashion."

The youngest of the bunch, Marius Janusauskas has just put the finishing touches on his first collection after graduating from the Royal Academy in 2012. "It was inspired by Gertrude Stein," he says. "The American traveling to Paris and the mix of two cultures and the mixing of symbols." An interesting inspirational mix, considering Janusauskus had to do extra legwork after first arriving in Antwerp after growing up in post-Soviet Lithuania.

"I came out of post-Soviet Lithuania, so for me the whole Western culture we were denied access to was so foreign, that barrier between us and them. I had to study Western culture, the symbols, looks and ideas that I was lacking before because of growing up with Russian culture."

That homework paid off with a collection that's both comfortable and wearable while also remaining forward-thinking in its style.

Though only just getting started in the fashion world, Devon Halfnight Leflufy already has the strong credentials necessary for a major breakthrough. One of 26 designers nominated for the second edition of the LVMH Prize, the Canadian-born menswear designer works with buyers in Paris, presents his collections in New York and has already been picked up by Opening Ceremony in LA, though he still calls Antwerp home, even after finishing his Master's from the Royal Academy. "I'm struck by the juxtaposition of history and tradition, against an emptiness that allows you to work and explore freely."