The Naked And The Dead Sea

In Israel, according to popular myth, Moses parted the sea and Jesus not only walked on the water, he far more impressively turned it into wine. Such a land of miracles would seem then to be the ideal place for a divine intervention like Spencer Tunick photographing 1,000 people, floating naked, in the Dead Sea. His photographs are always aesthetically-worthy documents of the events he invokes, but something about Tunick in Israel made this shoot one we wanted to see in the flesh, so to speak. Though it was something of a miracle for actually happening. Just days before the shoot, the hard-won financial support and public endorsement Tunick had received for it from regional government organizations was abruptly and incomprehensibly withdrawn.

Relatively unflappable and pretty much inured to the harsher dictates of Murphy's Law after decades of improbable if not near impossible human installations upon the social landscape, Tunick is still visibly reeling from the blow when I catch up with him just two days before his epic shoot. What makes the situation all the more potentially disastrous, the artist confides to us, is that the lion's share of his fundraising was done through an extraordinary, ambitious and just as successful Kickstarter campaign that garnered $116,270. "If I am unable to do this I will not get the money from Kickstarter," Tunick frets, "so I don't care what happens I'm going to get a photo out of this no matter what I have to do to get it." In that urgent and desperately narrow space between the artist's determination and the vicissitudes of fate is where -- quite apart from the jaw-dropping spectacle of the images his performance photographs produce -- Tunick choreographs his own sublime dance with chance. This staggering setback only makes his high-wire tango more poetic in its precariousness.

In full disclosure, the idea of writing about Tunick for the art issue of PAPER meant a little more to all of us than a lot of other stories might. You see, before he became famous around the world for photographing large masses of unclothed people exposed in public spaces, Tunick worked as a young man at Paper, one of our early photographers.

Back then his art was just as radical but far more modest in scale, typically just a few people lying naked in the streets of New York.

We're always happy when someone we know does well creatively, but as Tunick's installations over the years grew in size, first into the hundreds then into the many thousands; as he fought Giuliani and City Hall, taking the city to court for his right to make his art, winning and settling a landmark decision in First Amendment issues; as his efforts extended from hit-and-run illegal events into community-based projects officially sanctioned and often commissioned by museums, municipalities and other major institutions; as he became a subject of international media attention and two feature documentaries on HBO films; and as his art evolved from something purely visual to a cultural tool that addressed concerns ranging from global warming and ecology to gay rights; well, we were genuinely proud of the man. Finding out that he met Ari Fruchter -- the Tel Aviv-based entrepreneur who has been spearheading Tunick's dream of creating this photo shoot in the Holy Land -- is someone he met photographing for PAPER 20 years ago, only makes our presence here in Israel seem more appropriate.

Not to get all biblical about it, but Tunick's betrayal in Israel was more fundamental than the withdrawal of funds, the jeopardizing of a project years in the making or even the flipping loyalties of politicians fearful of retribution from cultural extremists. In the press conference that announced the government's decision not to back this human flotilla in the sea, they explained that their change of heart and mind was based upon their inability to support its overriding message regarding public freedoms of expression. Problematic a position as that is for the regional authorities to take, it belied the fact that Tunick's message from the start was never about that but rather, he explains, to bring "attention to the diminishing waters of the Dead Sea." That's right, the Dead Sea is quite probably dying. And if the willful optimism of eco-activists is perhaps messianic at times, it is likely no less magical in its thinking than Tunick's faith that the convergence of these many souls upon that spot as a media stage might in some way bring this fast shrinking entity back to life.

Call it a persistence of vision, the desperate will of the crew and the artist, above all (Tunick's father lives in Israel and this mission was dear to his heart), or perhaps even the righteousness of his call to ecological awareness, but many, many people roused themselves in the middle of the night to board buses and Tunick was ready.

It is still dark out when Tunick takes the megaphone to address the mass of participants lined up along the shores. Most have traveled through the night from Tel Aviv to be there, to keep the location undisclosed for fear that religious protesters might shut it down. There are others who have traveled far further to be here. His crew has already been barking out orders and instructions, letting people know what to expect, how to behave and providing sage advice like not to drink too much of the seawater because of its extremely high salinity. Tunick's less concerned with such logistics at the moment however. He's long known that events such as his are so chaotic and rife with the improbable that all the pretenses of planning matter less in the end than his capacity to improvise, adapt and somehow get the picture he needs. The crowd is rowdy, celebratory and excited but he wants to calm them down. This is to be a beautiful moment he explains, and he wants everyone to be in that moment, to appreciate what an amazing place and special experience they are about to have. Fun as it might be,
it's not about cavorting naked after all -- it is a contemplative space they are creating, a communion between the many hundreds here and the infinite, ecstatic majesty of nature itself.

Everyone takes off their clothes in unison and begins to scramble en masse down the beach, over the harshest of stones upon their bare feet and through the renowned Dead Sea mud that is so much like the primordial ooze from which we must certainly have sprung. And when they all begin to float there, the first rays of light cascading off the mountains of Jordan to the west, it is indeed a sublime moment.

But the quiet is soon broken. The word has obviously gotten out that 1,000 naked bodies would be congregating here, and as a result a veritable hornet's nest of planes have swarmed in with flying camera contraptions -- parachutes powered by mini-motors that look like they could have come out of some Mad Max movie -- all buzzing low to the crowds with their pervy peeping-tom zoom lenses clicking away. So worried as we were about those religious zealots or the pontificating politicos who were comparing this to "Sodom and Gomorrah," we'd never thought that the biggest threat posed was the national insistence on freedom. After a bout of yelling and frustration, Tunick realizes that there is nothing anyone can do about this and that the pictures in the end are all that matter.

But this was not just about one man's vision. As the discomforts of the elements set in, including the sun rising higher to shine upon parts of the body where it normally doesn't, all the distractions fade away behind something I can only in retrospect describe as a collective awe. Everyone came to the Dead Sea that Sabbath morning for different reasons, some for art, some for Tunick's ecological message, some to let the world know that Israel continues to be a place of liberalism and freedom even as it fights its own internal forces of fear and repression. Many too came for the party and as many more for the experience of floating naked in just such a spot. There was even a woman there who said that she was doing this because she had always been so ashamed of her body that she could not even be naked in front of her husband.

But for all the difference and diversity that comes with such a crowd, all those hundreds of participants shared something truly in common. In that I am reminded of a line from The Naked and the Dead, Norman Mailer's novel about the war that in the end gave birth to the state of Israel, when a general in conversation with a lieutenant explains to him "the natural role of twentieth-century man is anxiety." Amidst his many guises, the photographer, installation and performance artist, the man who is part showbiz part shaman, Tunick perhaps offers us a chance to escape, even if temporarily, this life of anxiety. 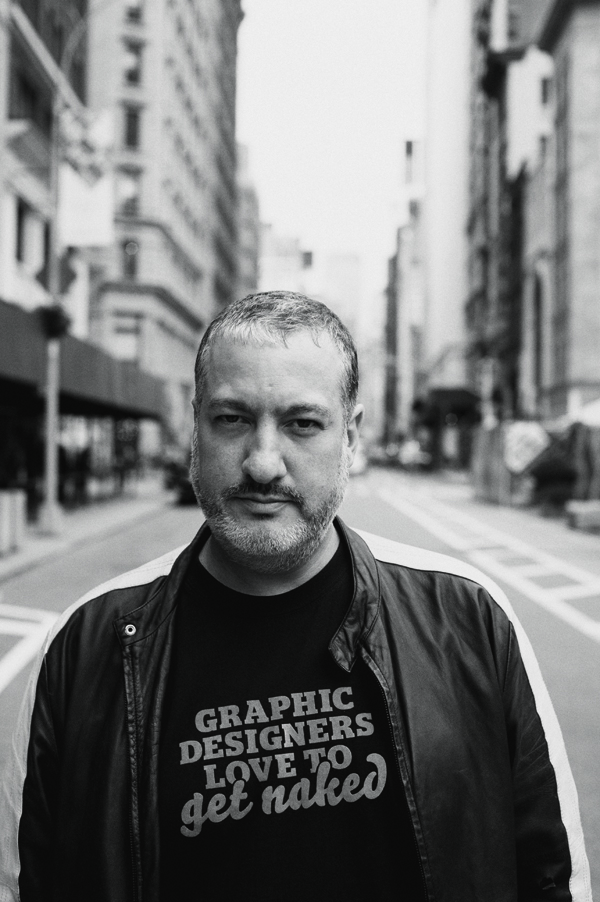 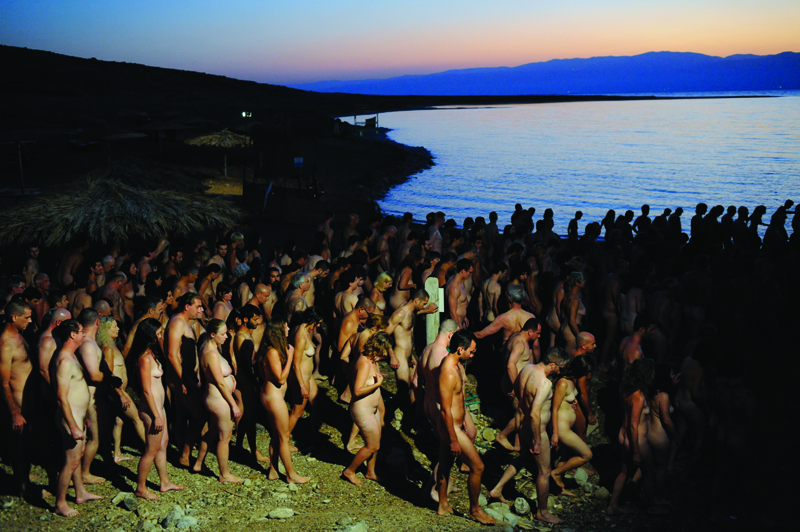 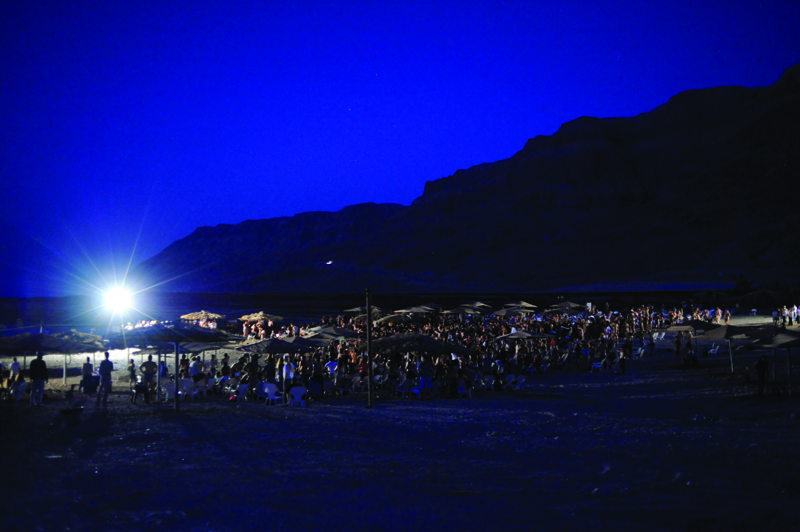 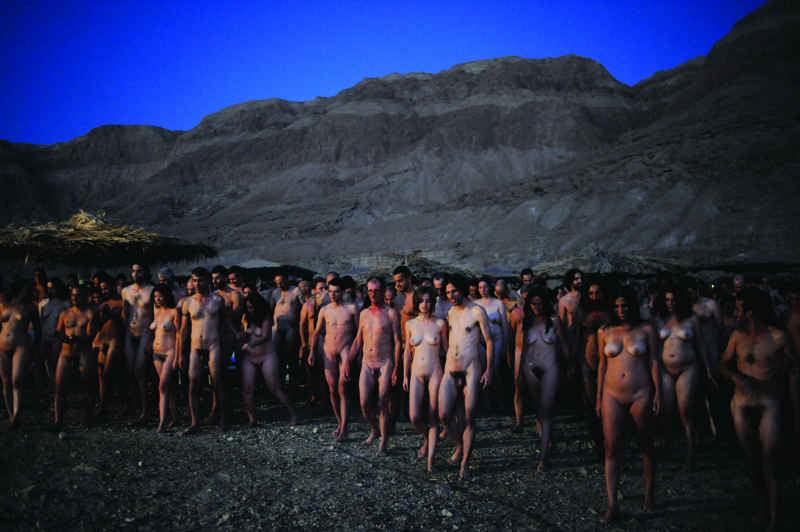 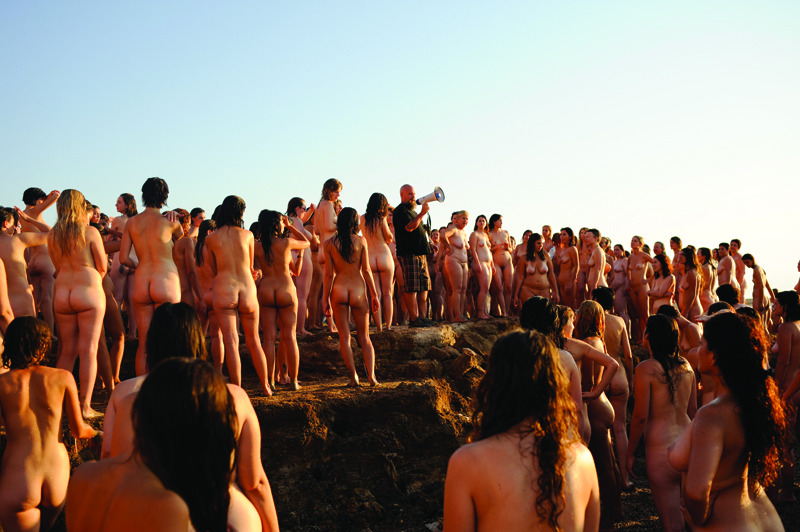 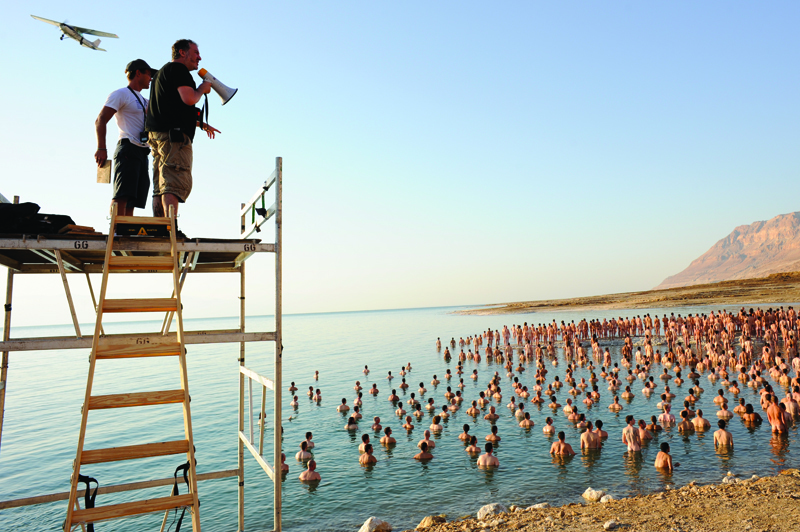 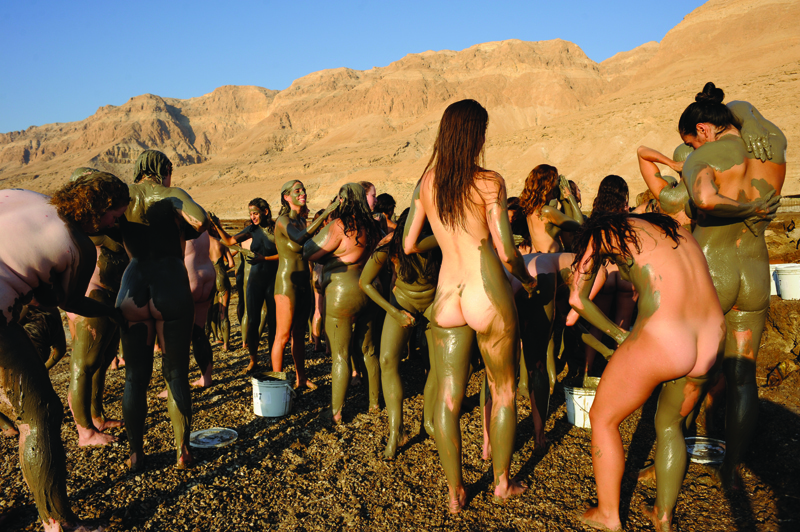 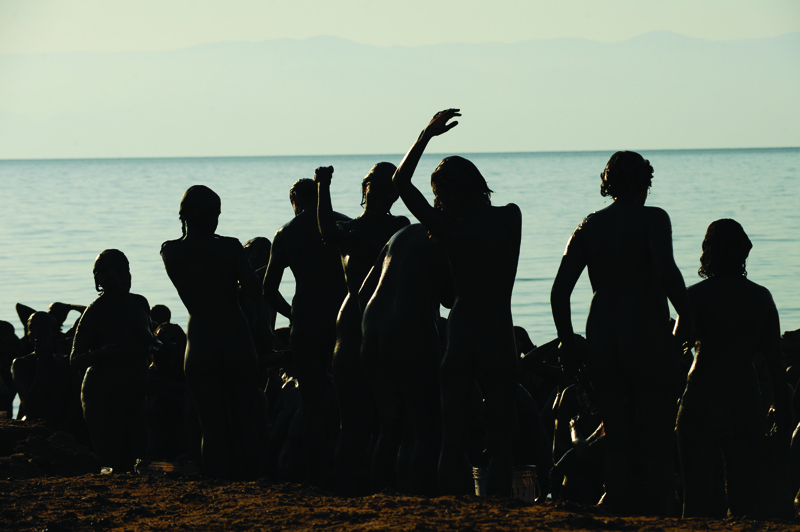 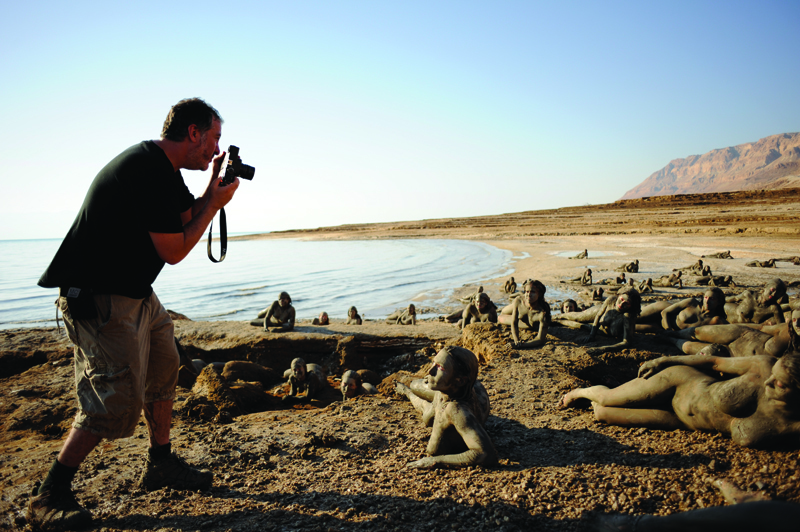 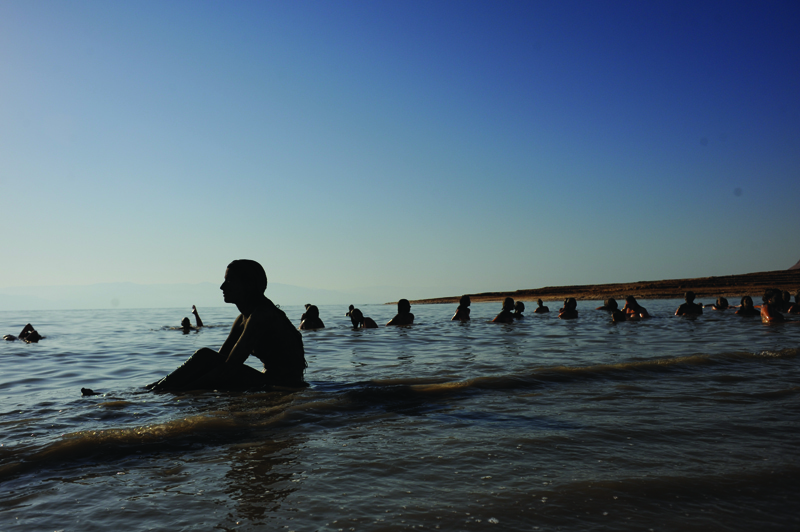