The Most Popular Boys In the World You've Never Heard Of 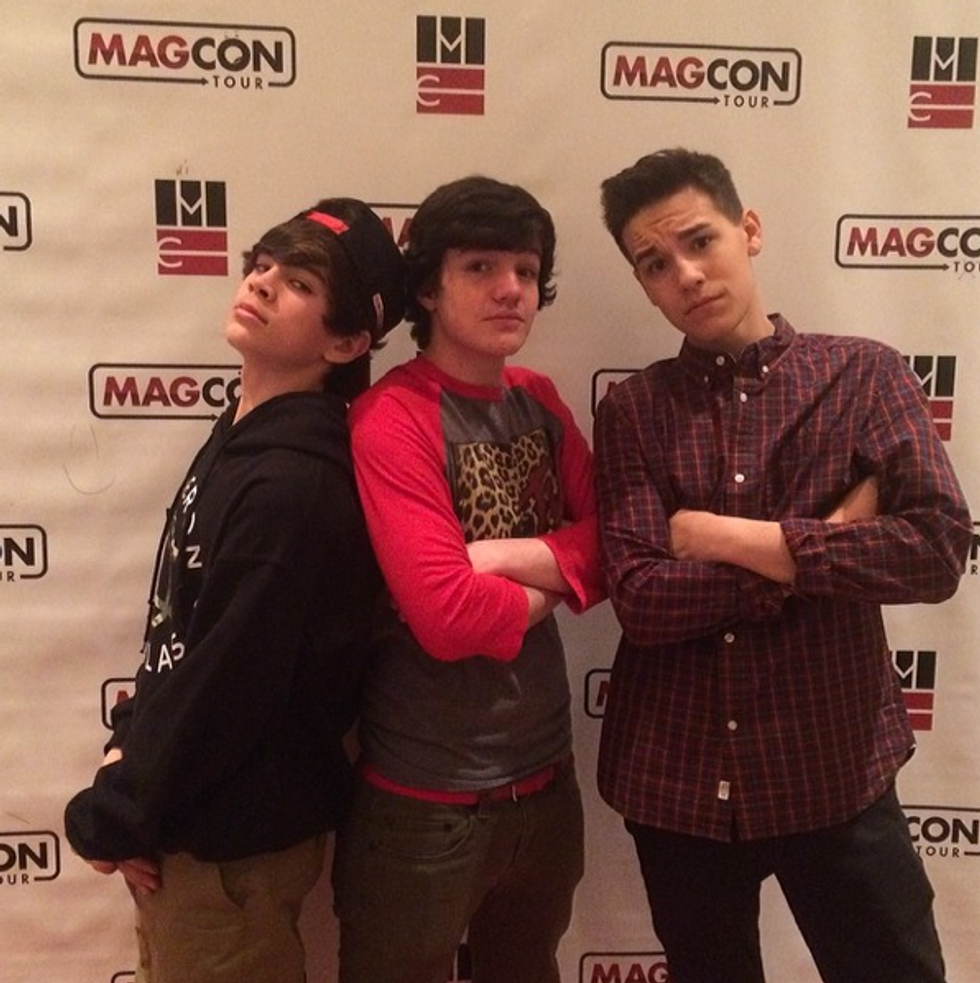 [via Instagram]
If you've happened to go on Twitter today, you've likely seen #RIPMagcon trending across the U.S. Magcon, for anyone born before the year 2000, is a collective of the most popular boys (and one girl) that you've never heard of. They broke up today, just so you know. Consisting of a group of fresh-faced, floppy-haired teenagers whose primary talent happens to be that they're very, very good at social media (especially Instagram and Vine) Magcon (short for "Meet and greet convention") is also a tour that brings these young online stars to meet their tween fans IRL in malls throughout the country. Their tour stops draw thousands of fans and their social media numbers rival those of their boy band counterparts. And, in a disturbing twist that should make One Direction deeply consider how and when they announce their eventual break-up one day, some Magcon fans even tweeted that they were cutting themselves over the news and, like that, #cutformagcon was trending on Twitter. Today's news of the break-up has played out on social media like the five stages of grief wrapped up in 140 characters or less. By mid-day, fans were reflecting on their favorite Magcon memories and as of now, they have united as one MagconFamilyForever.

Founded in 2013 by a Louisiana-based tech entrepreneur named Bart Bordelon, who got the idea when the son of friends told Bordelon he was meeting up with a few of his Instagram followers at a mall and a couple hundred girls turned up, Magcon is like a boy band mall tour except that rather than being famous for making albums, the baby-faced teens score fans with six-second videos of themselves goofing around with friends or playing with cats. (That being said, a few of the Magcon boys -- like a duo who go by the name Jack and Jack -- are trying to parlay their social media fame into music careers.) The tour also professes to have an anti-bullying message and on its website says many of these photogenic kids have dealt with bullying themselves.

Watching these kids' videos of themselves shirtless there's something vaguely illicit-feeling and it's easy to think that there must be some hidden exploitative agenda behind Magcon, whether a Lou Pearlman-esque scam or something grosser and more insidious. Though the music industry is no stranger to shady deals and mistreatment of young stars, at least there's a legitimate rationale behind why they're grooming the talent they work with. As for Magcon, what are those kids being appreciated for? What do they do? Their empire is built on seconds-long social media posts. Even Bieber had to busk.

By now, when the Kardashian business and fame model should basically be taught at Harvard Business School, the idea of attractive people becoming famous for nothing shouldn't be surprising. But the Kardashians at least had vague connections to Hollywood notoriety (Kim's friendship with Paris Hilton, their father's work as OJ Simpson's defense attorney, homemade porn) that were natural -- if not crass -- reasons to be fascinated. The fact that these kids are famous for doing nothing -- or doing what millions of other good-looking kids do every day online or off -- sits funny. But why should it? We grew up with Tiger Beat or TRL and, for this new generation of post-Millennials growing up in an age of Snapchat and Internet ADD, it makes perfect sense that their idols come to them via Instagram.

Wear Something Other Than a Smokey Eye This Valentine's Day

These Haus Labs Lipsticks Were Tested On Gaga Herself