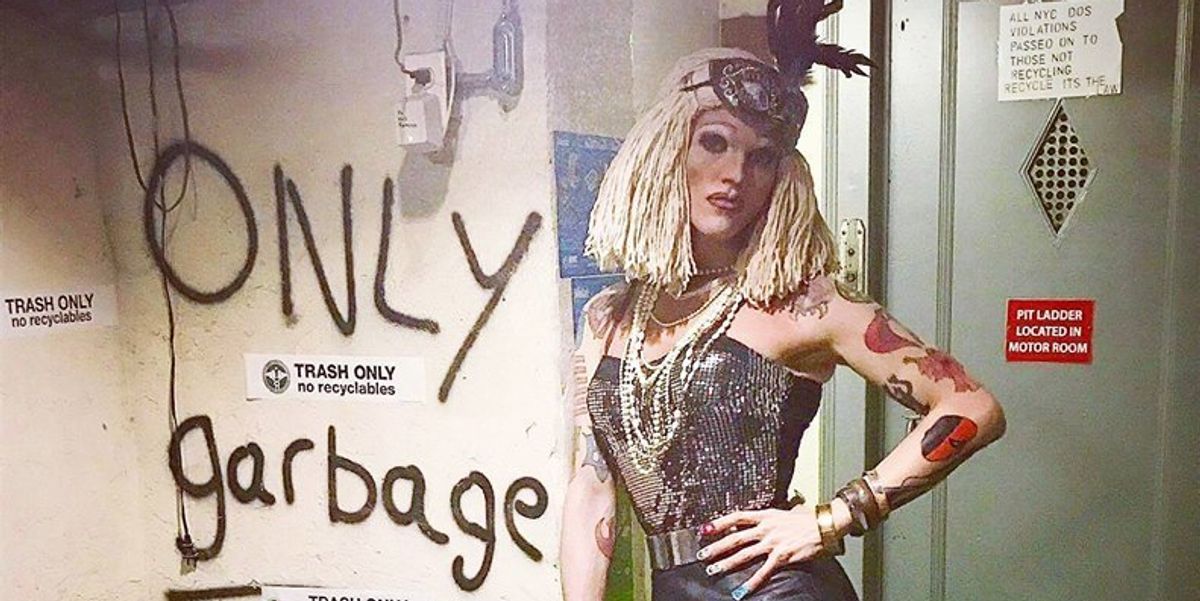 The Most Original Drag Queen in New York: Avant Garbage!

While most drag queens are glossing their lips and getting ready to act out a Whitney Houston ballad, Avant Garbage turns drag into performance art. The creation of Ohio-born Jesse Hicks, Avant wears mops for wigs and found objects and hand-me-downs for outfits, eschewing the traditional performance route by instead reading stories, playing video games, or commenting on cartoons. I caught up with Jesse (@theavantgarbage) to find out what makes Avant tick.

I pursued it casually, joking around about it on and off for three years. Every April, I have a birthday party and do a dressing up extravaganza. Three years ago, I dressed up like Avant Garbage. It was a gender queer theme and you had to play on gender. To think of pursing it full time, it's a little over two years now.

What was your first performance in a bar?

I was in Brooklyn at Metropolitan, for Merrie Cherry's Dragnet party, and I debuted this big ball gown that looked like when you pick up a bag of trash and the bottom blows out. The bottom was this huge explosion of trash--pizza boxes, hangers, cans, a volleyball, fake rats. It was a big hit. I did Hole's "Celebrity Skin." I've always considered that Avant Garbage's theme song. I was lipsynching it. I can't sing to save my life. I sound like a pillowcase full of kittens thrown into a ceiling fan. But I try to veer away from lipsynching. I found out that whenever I was asked to perform, it was assumed, "What song are you gonna be lipsynching?" I thought, "If I'm gonna stand out, I've got to step outside the box and find out how I can make myself different." That's when I started to do commentary on things.

Were you an entertainer before that?

I moved to New York to do standup comedy and I was very successful, but it made me depressed. I find people respect drag queens more than standup comics. They're not challenging you to make them laugh. In drag, they're more forgiving and adoring of you.

I've played Stonewall, the Monster, Pieces, Metropolitan, TNT, may it rest in peace, and Vodka Soda/Bottoms Up. Anywhere they would pay me. I'd take Kentucky Fried Chicken if they'd pay with that.

You told me about a performance you did where people drew on you.

It was at Eden, an interactive nightlife party. For the "Creation" theme, I brought in a bunch of shopping bags, and over the course of three hours I made a skirt made of shopping bags and people could help me. I wore it around the rest of the night. The next event was "Let There Be Light"—I thought, "Do I wear Christmas tree lights? I want to stand out and be seen." I came up with this idea of erasing light. I wanted to dress in all white and wore this chain around my waist—very innocent, very Virgin Mary. I'd walk up to people with a couple of Sharpies of different colors and didn't say anything and some people didn't get it and some people got it right away. Some asked if they could draw on me, which was awesome, and some just went for it. There was a lot of "Fuck Trump" and drawing penises. It was interesting to see the amount of gay men who were interested to draw all over my breasts and vagina area. There's so much misogyny in the gay community, and I'm the first to advocate against that. A lot of the women asked me permission. It said something about society at the moment.

Do you feel the gay men were being misogynistic by being so aggressive?

Maybe not inherently—maybe not an eagerness to express that—but I think latently there's something there. I see gay men grabbing women on their breasts, "and It's OK because I'm gay," but it's still unconventional touching. If you're in drag, they see that as an invitation to mess with you in several ways. A lot of gays think of drag queens as a local celebrity, so they're enamored with what they're doing, but I feel gay men in general take advantage of women, and vice versa.

Do you stuff your chest?

Depending on the outfit. If it's a big poufy skirt, no. Tucking is not comfortable. I will not do it if I don't have to.

What's your philosophy of fashion?

I spend as little money on drag as I possibly can. I will either create it from trash or I will take donations. Oftentimes people say, "I'm throwing this out. Do you want it?" "Of course!" If I do have a pre-existing garment or fabric, I'll heavily alter it. I will never buy anything off the rack. It's either spray-painted or altered in some way. I will not purchase something at Mandee or Rainbow and call it Avant Garbage.

Have you ever literally reached into a garbage pail?

Of course. Most of my furniture's come off the streets.

I'm sure once or twice. Friends say, "Don't touch that," but I say, "No, I want it." I definitely pick things off the streets—scarves, hats. But I launder them.

I found a Judy Jetson spacesuit, a 1960s idea of what the future will look like in 2020 when we're all living on the moon. It was hung up on a fence. I went into a deli and got a plastic bag so I could take it and if there were bedbugs or whatever, I could contain them in the bag, and I immediately threw it in the dryer for an hour when I got home.

Despite grabbing at free things, lol, do you have a day job?

I wait tables part time, in the evenings. Hopefully I will not have to do that one day.

You have really set yourself apart from other drag queens by not going the conventional route. Is that your goal?

I think everybody's searching for their 15 minutes of fame, whether they're a drag queen or not. I respect so many different types of drag, but yeah, I'm trying to do something different, trying to stand out. It's my niche. I'll never buy something at Forever 21 and call it art. A lot of people can do that.