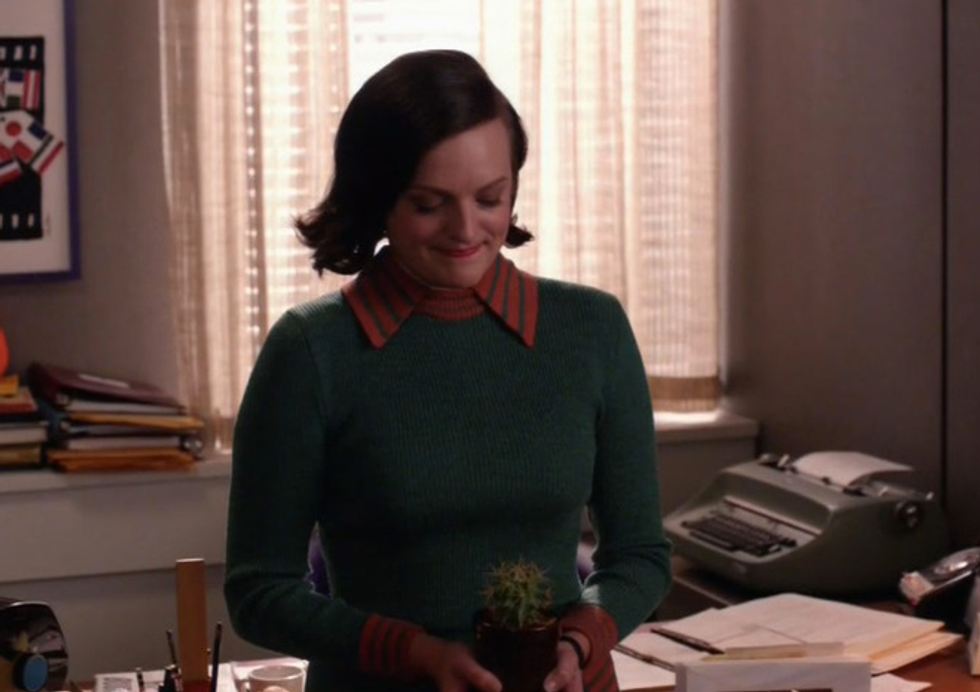 The Most Obvious Symbols From the Mad Men Finale: A Ranking

Matthew Weiner has never seen an object he couldn't invest with a disproportionate amount of capital-M Meaning. That makes sense, since it's Don Draper's job, too -- everything from a can of baked beans to a film projector to pantyhose get ground up in the advertising mill of Mad Men and regurgitated as Important. As obnoxious as that tendency can be, it's also one of the most impressive things about Mad Men, a show that is, for the most part, aggressively mundane in its subject matter yet manages to imbue it with near-cosmic significance. And "Person to Person," last night's series finale, doubled down on that trend, throwing objects at viewers and saying "understand me!" To help with that understanding, here are the most obvious symbols from the Mad Men series finale, ranked from least obvious to "ow, did you just hit me on the head with a copy of Oedipus?"

5. Coke (the drug)
Where was that in the episode? Joan and Richard try blow on their trip to Florida, the closest we will ever get to Mad Men: Vice.
Wait, so what does it mean? (Asking for a friend): The quick high and feeling of ultra-competence Joan and Richard get from coke ties in to a lot of things -- Joan's desire for control in her professional life, the dizzying possibility that she might go into business with Peggy, that she might have found a life partner who isn't her mother. The hit of connection also ties into the other coke symbol (but we'll get to that).
So... how obvious is it? The scene is funny enough that the overt symbolic value kind of sneaks up on you a few scenes later. 4/10

4. Pete and Peggy's Cactus
Where was that in the episode? Pete gives Peggy a cactus as a going-away present.
Wait, so what does it mean? (Asking for a friend): Well, this happens a decade after he gave her another prickly living creature (heh, birth!). A cactus isn't the most attractive plant, but it's sturdy and doesn't need a ton of water and it grows -- almost like Pete and Peggy's relationship! Or Pete! Or Peggy! Wow, what a multi-layered symbol!
So... how obvious is it? Not as obvious as it could have been! 6/10

3. The Cool Racing Car
Where was that in the episode? Don works on a car trying to break a speed record with some dudes in Utah, before he heads to California.
Wait, so what does it mean? (Asking for a friend): I mean... this is Don we're talking about, a guy who loves running away from his life like it's his job.
So... how obvious is it? We're abandoning all subtlety here in an attempt to escape the gravity of subtext. 8.5/10

2. Person-to-Person Phone Calls
Where was that in the episode? We're getting near the end -- this literally gives the episode its name, in the dual calls Don makes to Betty and Peggy, the two most important women in his life who are not his daughter.
Wait, so what does it mean? (Asking for a friend): This is unbelievably obvious -- it's about connections, man. The entire episode focuses on relationships between two people (Don and Peggy, Don and Betty, Don and the guy in the support group, Joan and Peggy, Peggy and Stan...) and the transmission of understanding between one another.
So... how obvious is it? 9.5/10


1. Coke (the drink/symbol of capitalist oppression)
Where was that in the episode? Um...
Wait, so what does it mean? (Asking for a friend): What doesn't it mean? It's the entire show wrapped up in a nice, cool bottle -- a product of a major corporation that symbolizes human connection being traded in for some bubbles. It's Don's ultimate victory. It's the capture of the spirit of the 1960s and its transformation into a product. Fun!
So... how obvious is it? HAMMER DROP.