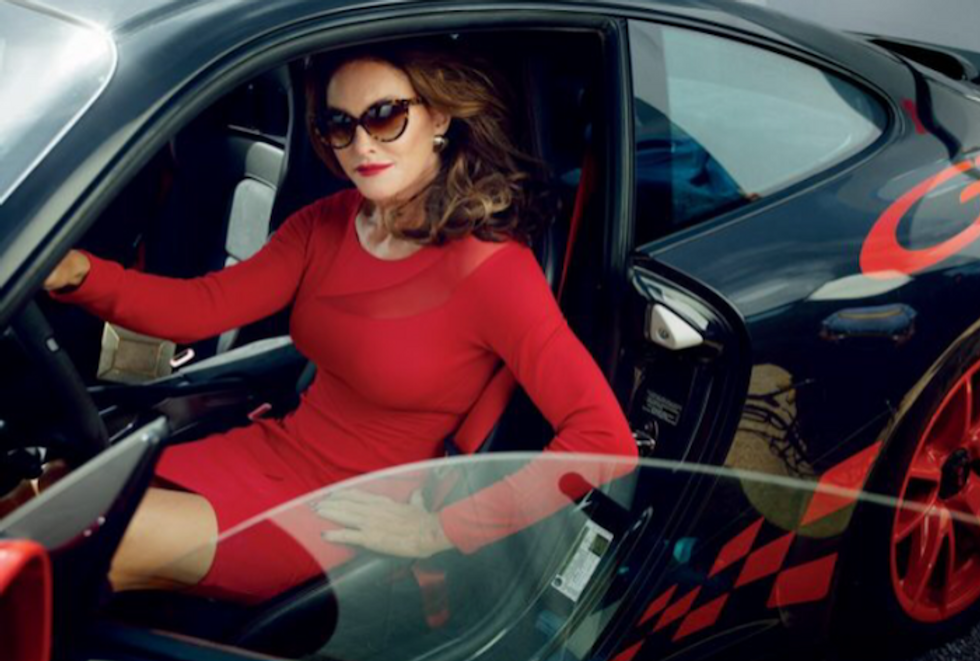 by Abby Schreiber
PAPERMAG
As everyone who's been on the Internet today knows, Caitlyn Jenner, formerly known as Bruce Jenner, made her formal debut on the cover of Vanity Fair in photos shot by Annie Leibovitz and a story written by Buzz Bissinger. While the issue won't hit newsstands until June 9th, subscribers to VF's digital edition were treated to a sneak peek at the article. Below, we round up some of the most illuminating quotes from the story and include a handful more of those gorgeous shots that have already been drawing comparisons to Jessica Lange (or, we might add about the picture with the lace corset and leather jacket, an older Angelina Jolie).

Caitlyn (nÃ© Bruce) on being transgender and deciding to transition from male to female:

"I wish I were kind of normal. It would be so much more simple...The uncomfortableness of being me never leaves all day long. I'm not [transitioning] to be interesting. I'm doing this to live."

"If I was lying on my deathbed and I had kept this secret and never did anything about it, I would be lying there saying, 'You just blew your entire life...You never dealt with yourself,' and I don't want that to happen."

Caitlyn on undergoing a painful hair removal operation in the '80s without taking any medication:

"[P]ain is kind of, for me, part of the pain for being me...this is what you get for being who you are. Just take the pain."

Photo by Annie Leibovitz for Vanity Fair
Caitlyn's oldest son, Burt Jenner, on his father and their at-times difficult relationship:

"I have high hopes that Caitlyn is a better person than Bruce. I'm very much looking forward to that."

"I was very fortunate to have an awesome stepfather to fill the void [left by Bruce]...I learned how to open doors and shake hands and look people in the eye. Things that my dad never would have taught me."

Caitlyn on cross-dressing in the '70s:

"People say, Oh my God, what a body -- you look great. That wasn't what I was looking for. I could not really cross-dress. I tried to grow my hair out as much as I could without getting yelled at."

"Underneath my suit I have a bra and panty hose and this and that and thinking to myself, They know nothing about me."

Kris Jenner on what she did and did not know of Bruce's transgender identity:

Photo by Annie Leibovitz for Vanity Fair
Caitlyn on her relationship with the four Jenner kids, Burt, Cassandra, Brandon and Brody:

"I have made a lot of mistakes raising the four Jenner kids. I had times not only dealing with my own issues but exes. [It was] very traumatic and there was a lot of turmoil in my life, and I wasn't as close to my kids as I should have been."

Caitlyn on her marriage with Kris:

"The first 15 years I felt she needed me more because I was the breadwinner...Then really around the show, when that hit and she was running this whole show and getting credit for it and she had her own money, she didn't need me as much from that standpoint. The relationship was different...I think in a lot of ways she became less tolerant of me. Then I'd get upset and the whole relationship kind of fizzled."

Kris on Bruce's transition and not fully revealing his gender dysphoria until post-divorce:

"It was like the most passive-aggressive thing I think I've ever experienced...Why would you want to be married and have kids if this is what you wanted since you were a little boy? Why would you not explain this all to me?"