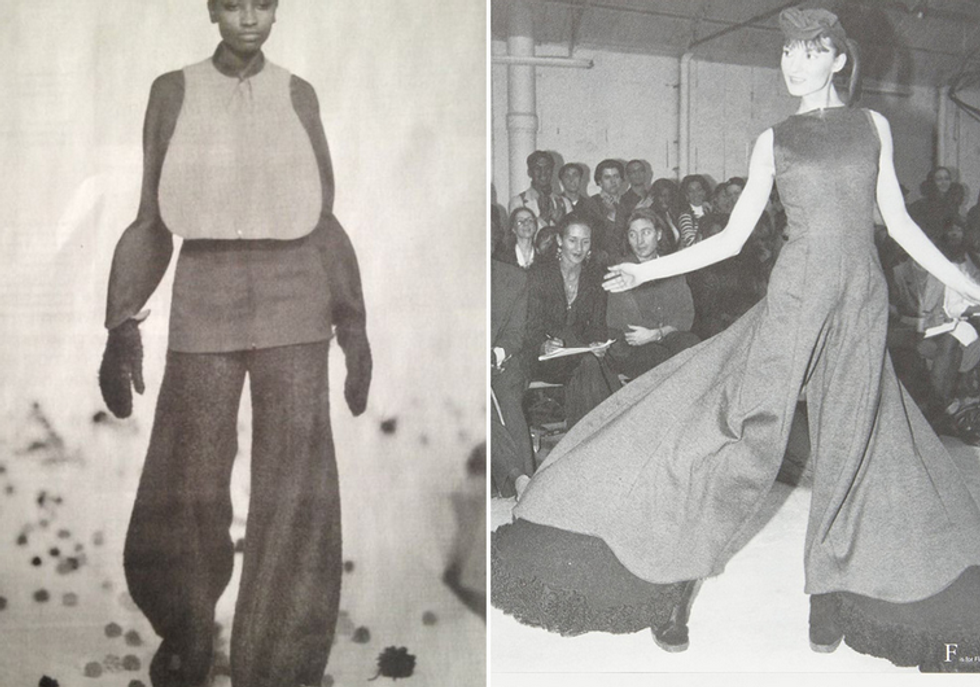 The Most Badass Fashion Designers Of All Time

When Papermag.com asked me to create a list of who I thought the most badass fashion designers in my book were, I was in heaven. This catagory of creatives are always my favorites because they do what I love: they subvert, they act like punks, they shock and they turn everything upside down. Most important, they tell the truth. They create uncompromisingly and independently from their hearts.  Most of them have had a contentious relationship with the fashion industry and press but hell, that didn't stop them. Most weren't in it for the money, anyway. (My kind of peeps.) You might call them badass, but I call them great.  Below, I've catalogued my favorites, arranged by their greatest, most thug moments.

VIVIENNE WESTWOOD
Thug moments: Westwood would never ever kiss anyone's ass editorially or in retail. Her clothes often celebrated taboos and often shocked. She showed up at the punk show at the costume Institute gala with a photo of (then) Bradley Manning (who is now Chelsea) pinned on her dress with the word TRUTH  lobbying for amnesty for him. She has posed nude for Jurgen Teller and caused a scandal when she posed as a punk Queen of England for the cover of the Tattler. Westwood and her equally badass music impresario husband Malcolm McClaren's radical fashion collaborations continued to raise hell throughout the seventies and eighties. They were true subversives who turned the fashion world on its ear.


STEPHEN SPROUSE
Thug moments: A radical designer whose super-edgy, aggro work was born out of the club and music scene in New York in the early eighties. His early, extreme, Warholian-inspired looks were produced with ultra-luxe fabrics and construction-- think fluorescent cashmere custom woven in Italy and DayGlo graffiti printed on Louis Vuitton bags. Sprouse's house model was trans artist Teri Toye and he produced radical street looks consistently through out his career --  but he produced them using extreme luxury, which was about the most uncommercial idea ever.

Geoffrey Beene
GEOFFREY BEENE
Thug moments: Geoffrey Beene was a gentile, waspy man on the outside but a badass punk on the insidehad longstanding feuds with much of the mainstream fashion community. He banned WWD from his shows and in later years had problems with everyone from Vogue's Anna Wintour to New York Times fashion critic Cathy Horyn. Rumor had it that one time, a super-powerful magazine editor-in-chief came with a posse for a collection preview and asked Beene if he had anything in red. He proceeded to go in the back and grab one of his sewing ladies old dirty red shoes and threw them on the table in front of the editor. He refused to become a part of the fashion establishment, poo-pooing the CFDA and many mainistream fashion magazines.

Martin Margiela
MARTIN MARGIELA
Thug moments: Margiela refused to be photographed and would never let anyone (whether editors or buyers or celebrities or fans) know who he was or what he looked like. His idea was to remove all ego from his fashion house so he would dress everyone in the house in the same uniform -- a white lab coat. His shows were fairly radical conceptually. I once attended a show of his in a salvation army on the outskirts of Paris where everyone had to sit on used furniture including old washing machines and toilets.

CHARLES JAMES
Thug moments: Charles James is still known today as one of the most brilliant and respected designers and was given a posthumous show at the Costume Institute in 2014. James was actually a super-difficult and mercurial -- although brilliant -- 1950s designer who made elaborately constructed magical ballgowns for everyone from elegant Park Avenue heiresses to glamour queens like Marlene Dietrich, Elizabeth Arden and Gypsy Rose Lee. After living the last part of his life in the Chelsea hotel he sadly died broke and underrated in 1978. His mantra was "I am the most copied person in the world."

KEMBRA PFAHLER
Thug moments: Pfahler has always been a badass artist, performer and co founder of the band the Voluptuous Horror of Karen Black. Pfahler, who spends most of her time performing nude and colorfully body-painted with an enormous rat's nest of hair and blackened teeth. What many dont know is that years ago, Kembra Pfahler threw her hat into the fashion designer ring and produced a few fashion shows filled with completely outrageous and fabulous S&M-Catholic-girl inspirations. Talk about badass.

Andre Walker
ANDRE WALKER
Thug moments: Walker has always been an artist expressing himself through clothing design, rather than a 'fashion designer.' Although he still creates a collection which is available at Dover Street Market, he doesn't show anymore. Decades ago, Walker's shows were legendary and outrageous. He invented something called the "pantyskirt" which he showed when he was just a teenager and which was copied by Jean Paul Gaultier in Paris to all of our horror. He once sent a group of girls down the runway in one of his shows walking invisible dogs and showed a top that needed three people to wear it all connected to each other at the shoulders. Punk af.

Commes des Garcons
REI KAWAKUBO
Thug moments: Like Margiela, Commes des Garcons Rei Kawakubo is another badass hider. She wont give interviews and is rarely seen in public, preferring her radical work to speak for itself. Its not that Kawakubo is a punk, but her work has absolutely no connection to trends or commerciality and doesn't resemble normal clothing. Her most legendary thug collection had to be her hunchback collection, in which every piece had huge hump-like appendages attached to them in all the wrong places. Another badass fashion moment was her "flat" collection a few years ago in which she designed clothing that all looked two-dimensional.


ALEXANDER MCQUEEN
Thug moments: A recent biography about tragic designer Alexander McQueen shockingly claimed McQueen had planned to kill himself on the catwalk in front of a live audience. It doesn't get more thug than that. At one of his most outrageous shows in 2001, McQueen forced his audience to sit around a large mirrored box for over an hour, staring at their own reflections until the lights inside went on revealing a padded cell with the models wearing the clothes.

Rick Owens
RICK OWENS
Thug moments: Designer Owens and his partner Michelle Lamy have always marched as outsiders to their own tune. Owens made clothes for years in a small Los Angeles storefront and when he finally moved to Paris his business took off big time. Owens, however, never lost his radical subversive mojo. His favorite house model was always the insane-looking Kimbra Pfahler and Owens recently shocked the fashion world with one of the number one thug fashion moments of all times: His mens collection caused a ruckus last January when it  featured a lineup of men's penises fully exposed!

Hood By Air
HOOD BY AIR
Thug moment: Designer Shayne Oliver is definitely a badass. Just this week, HBA's show theme was juvenile delinquency! My favorite badass look was look # 1 -- a traditional-looking jumpsuit from the front, but as the model passed by you saw that there was nothing in the back. Every piece in Oliver's aggro HBA show had gender-bending and subversive elements. Oliver is definitely our favorite badass of the year.

Patricia Field
HONORABLE MENTION: BADASS RETAILER
PATRICIA FIELD
Thug moments: Pat Fields was always a badass. She would buy collections from designers who were so out there no other retailer would touch them. And she was always fiercely loyal. She often had the most amazing sales because many of the designers she carried were not commercial and she had to unload it all for cheap. The craziest moment I remember was when Fields had a huge sale of all Stephen Sprouse's going-out-of-business stuff. She bought his entire stock from the bankruptcy court and sold the uber-expensive stuff to the kids in her store for a song.