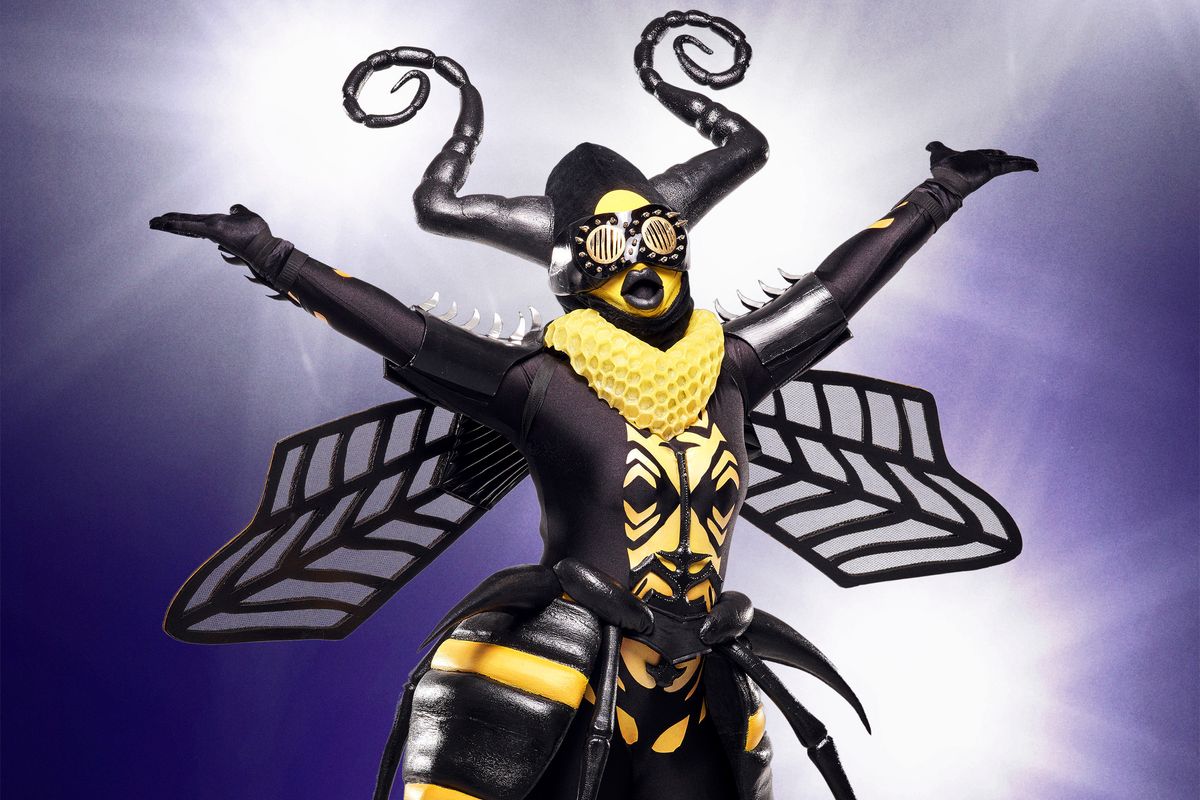 'The Masked Singer' Costume Designer Has the Best Job in TV

The whole point of Fox's The Masked Singer, which takes inspiration from Korean show King of Mask Singer, is trying to guess the identities of celebrities who have their faces and bodies obscured. But we've found ourselves way more interested in the intricate designs of their disguises, created by costume designer Marina Toybina. An industry veteran, Toybina won one of her four Emmys for creating Katy Perry's Super Bowl XLIX halftime show costumes in 2015 — the one with the iconic dancing sharks.

It's incredibly rare to see such dramatic costume design on prime time TV, let alone on a singing contest. A freaky Hunger Games-esque bee with giant curled antennae, a gold Thierry Mugler-inspired lion, a steampunk deer with a gas mask? It's all so unapologetically wild and wacky and fun, with a surprising high fashion influence.

PAPER called Toybina to find out more about her work.

Okay, so I mean it as a compliment, but The Masked Singer looks a little bit like government propaganda. Like a TV show that the government would commission to distract people from what else is going on. It has a Hunger Games vibe! The costumes are so much fun, but also a little scary.

Well I am personally a big fan of The Hunger Games! And for me the show was about trying to have fun with something that really had no rules or guidelines. There were no rules or limitations, and I wanted to do something that was eccentric and out of the box yet familiar, involving influences from the movies and stage shows I like. And also to create something that might be slightly uncomfortable to watch, but at the same time you ask, "What is this?" You know? And I think that's what's tuning people into the show. They don't quite understand whether they're supposed to love it or hate it. At the same time it's so incredible and so entertaining that people are just watching it to fall in love with the characters, to have a favorite costume, which I think is kind of what the job of a costume designer is. To create this world that people fall in love with, and draw on all these influences — whether it's the Korean show, or personal things I like, and create this world of characters.

Watching footage of the original South Korean show, the costumes are nowhere near as detailed or exciting. They just have paper masks!

I'm a huge fan of what their show is all about, but I think definitely we were able to build our show slightly differently. I wanted to make sure we didn't cut any corners, I wanted to create costumes head-to-toe, paying very much attention to details. It's very much character-driven, we wanted to develop this world that the characters live in. In the Korean show it's a little more anime, a little more subdued compared to what we wanted to build here. Although I've been watching the newer season of the Korean show and the costuming is stunning, much more elaborate, and I'm a big fan of what they're doing — so I can only imagine what we can do with our show here. The Masked Singer is something that's never been done before on US television, and I was given the creative freedom to design something that people are not used to seeing on a reality competition or even just a small TV show. And then from there we're now building a new platform, a new outlet, for costume designers. Which is incredible.

Who are some of your other biggest pop culture influences as a costume designer for The Masked Singer?

Well, I'm a huge fan of The Crow. One of my favorite movies, one of my favorite concepts for a film. And from there I wanted to design this bird that had an identity of strength and not being caged in, and creating this world around it, while at the same time giving visual hints about who is wearing the costume. Some of the other costumes have more of a fashion influence, Thierry Mugler, you have all these elaborate moments that I was able to bring into the costuming because of my background in fashion. Or taking the lion mask for instance, the big influence is Egyptian gods, and the Chronicles of Narnia, so you can have a figure at home that people can relate to but at the same time building it our way. Also I think my team has a lot to do with it, every person working with me has a specialty and we collaborate together and come up with great ideas to build costumes unlike anything seen before on TV.

Did you know the identities of the celebrities beforehand? How much of the design process revolved around that?

The characters were actually designed prior to casting. I did 20 or so sketches and provided them to the network and producers. We were able to focus on the 12 that we needed for the first season of the show and chose which characters would premiere. From there casting happened, and once we knew who was going to be on the show we asked them if there was a character they particularly wanted to be, or else we were able to choose for them, find a perfect match based on the structure of the costume and the weight. Which person can pull this off? So it became a big collaboration between them either being very open to the idea of us proposing costumes to them or choosing certain specific characters that they really wanted to be on the show.

It must be difficult to design an intricate mask that someone is going to sing out of and perform in front of a crowd in.

Right. That was possibly the most challenging part — the actual construction of the costume, especially as each one was so different. We had to figure out a few challenges, like where is the natural mouth, how can we remove it from the neck so they can still bend and not hinder any of their movements. So it was a bit of a challenge, but we were able to make it work. Sometimes there have to be compromises.

Do you have a personal favorite?

I don't! I think every costume has its elements that are memorable to me, because I know how much work went into every costume and they're all so, so different. The one that I think gets forgotten is the pineapple! He's a representation of vacation time, enjoying life. Then there's the poodle, which has these incredible geometric shapes to it, but also has a diva-esque Real Housewives element, like a little dog you'd own in Beverly Hills. The one that took the longest and I was married to the most was the lion, because of how intricate that mask was and what a unique process it was to build. We had to create a mold for it. It was the most challenging and longest process.

The rabbit is super scary, by the way!

But in an amazing way! He makes you love him but when you look at his eyes it has this darkness to it. He's a bit crazy, it's about creating a balance between light and dark. You see him in a straight jacket but he's at the same time full of life, ready to be active. Even the deer, he's somebody who has been in a battle, once you zoom in on the costume you can see a lot of specific details, and I hope the audience catch on to those little things because there are some clues about who is wearing the costume.

It's so incredible, and it takes a village to come up with something like this, I hope it builds a great platform for more costume design on television, I think it's a craft that's slowly being forgotten about. The artwork and the intricacy that goes into costume design is something that should be more recognized! Because it's brilliant.