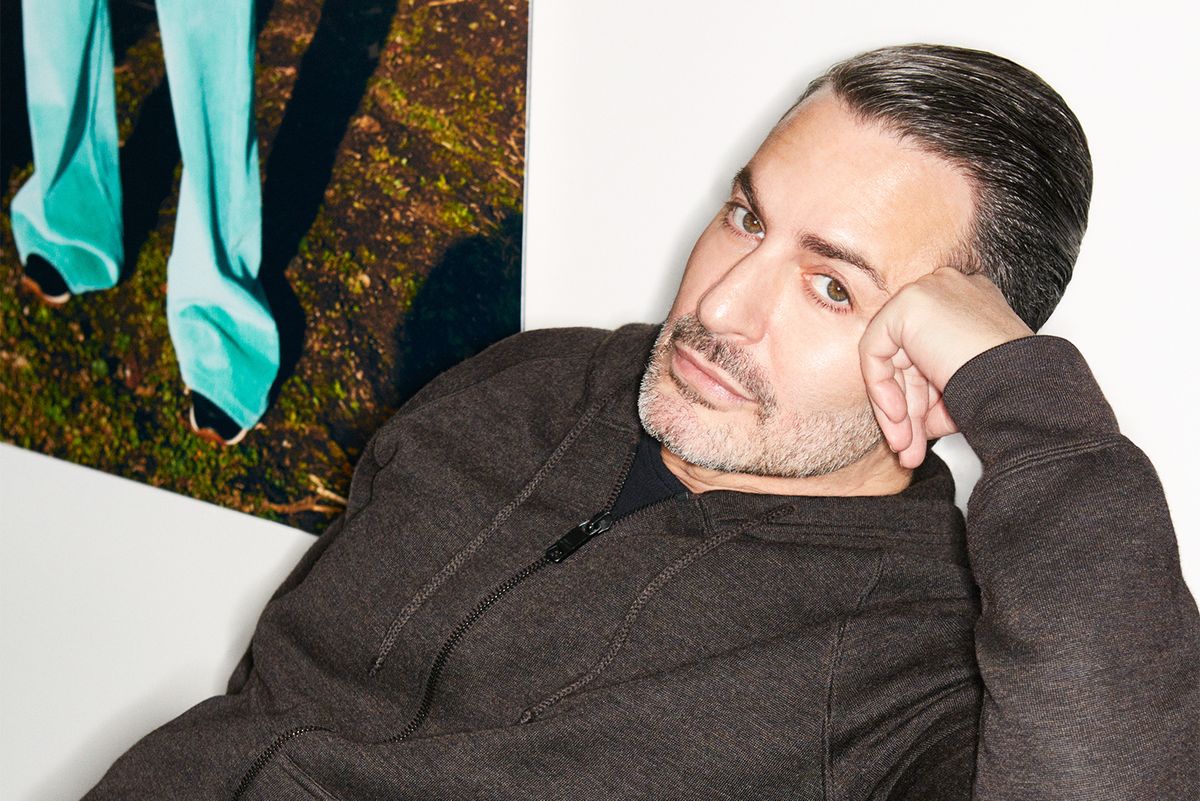 The One and the Only: Marc Jacobs

In an airy upper floor of Marc Jacobs' SoHo headquarters, racks upon racks of fuzzy sweaters, wispy silk dresses, Playskool-colored raincoats and buttery cashmere thermals stand in neat rows, absorbing the afternoon sun. The effect of seeing this latest collection in full is not so much the thrill of the new, as one experiences at the designer's spellbinding runway shows during NYFW, but rather the uncanny familiarity of pieces remembered from years or even decades ago, lost and now found. In fact, there is not a single piece of the runway collection anywhere in sight. Instead, you see what appears to be an old Marc by Marc-style rugby shirt or candy-colored corduroy from the mid-aughts or the soft grunge dresses and knits and beanies that are so much a part of the MJ story. It is comforting and even, perhaps, a bit emotional. Which is exactly the idea. Welcome to the not-so-new world of THE Marc Jacobs.

Related | On the Marc

"It isn't about nostalgia, though," Jacobs is quick to point out. Instead, THE Marc Jacobs, a new, expansive offering named for the designer's personal Instagram @themarcjacobs, "feels right for now," the designer says. A separate collection entirely from the ready-to-wear — and at a blessedly more accessible price point — it is (deep breath) a mix of reissued styles from past seasons and old Marc by Marc collections, replicas of found vintage pieces collected over the years by the design team as well as a head-spinning roster of forthcoming collaborations with, among others, Charles Schulz, the legendary creator of the Peanuts comics; leather jacket experts Schott NYC; bedding and linen purveyor D. Porthault and graphic designer Milton Glaser, all due out on a rolling basis beginning this May. Oh yes, and there's another sub-category called Trade*Marc, composed of stickers, T-shirts, socks and other sundries, that recalls the esoteric inventory of the much-beloved store of the designer's youth, the renowned Fiorucci on East 59th St.

THE is "item-y," a word Jacobs lovingly uses when describing both this new collection and the primary mission of Marc by Marc Jacobs, which was unceremoniously shuttered in 2015. What followed after the diffusion line's closing was a somewhat disorienting move to mix the brands' different price points all together in shows and in stores. With THE, there is now a clear distinction between the runway — "a place where we make a statement" — and everything else.

This collection arrives at an equally exciting yet fraught time in fashion and retail. Social media and e-commerce have upended how we shop and express ourselves through style, and Jacobs acknowledges, with characteristic self-awareness, that the girls and guys he designed for when he began are older now, as is he. "I'm in this position, which happens to a lot of people who continue to work for a certain amount of time, [where] I know instinctively how to put things together for people who have my sensibility, my spirit, my age. But I'm not directly in touch with nor do I have that primitive connection to people 20 or 30 years younger than me."

"We are just making the things that we think look right to us right now."

Semantics of what THE is or isn't aside, the allure of these clothes — their friendliness, their integrity and, yes, even their nostalgia (for those who remember their first iteration) — is undeniable. Jacobs' talent has always been his ability to mine our collective consciousness and manifest it in that just-right thing you want to buy and put on before you get out of the shop, even if they have a ring of the familiar. "I don't think of myself as an inventive designer. We are not inventors. We are not curing problems, we are not solving women's wardrobe needs. We are just making the things that we think look right to us right now," he explains. These are comfort clothes for a moment when we could all use a bit of it.