The Hills Are Alive...

Amid the sea of catfights, drunken nights at Area and necklace-wearing, frosted-tips-donning dudes that populate the highly addictive reality show The Hills, we've always found that Whitney Port has stood out as a solid and even-keeled presence. When we first met the blonde-haired, blue-eyed Ms. Port, she was Hills star Lauren Conrad's bright-eyed and bushy-tailed co-intern at Teen Vogue. As season two rolled around, Whitney found herself with more responsibility at the magazine -- she even modeled during a fashion presentation on Good Morning America, and subsequently tripped -- and became one of Lauren's closest friends as her friendship with Heidi began to unravel. On season three, which debuts tonight, Whitney is about to move from a b-level side-character to a more front and center role. Now that Heidi is totally out of the picture, Whitney, Audrina and Lauren are a fierce trifecta. She's been hired as a full-on âfashion contributorâ at Teen Vogue and it looks like she's going to be dating her trainer! We asked her a few questions over the phone and she was kind enough to respond.

Alexis Swerdloff: Where are you right now?

Whitney Port: In L.A., at my sister's 20th birthday party. We went out to a little lunch, me and my two sisters and my mom. Four girls.

AS: What are you doing up to the premiere of The Hills? Has it been crazy? Will there be a party?

WP: It really hasn't been so crazy, I kind of stayed out of everything. I'm going out of town for two weeks, so I won't be in the middle of the craziness. I'm going to Missouri with my whole family -- we've been going there every year since I was born. And yes, we have TV there. There'll be a premiere party while I'm gone. I'm debating whether I want to fly back for the night.

AS: What would you wear?

WP: Definitely a dress of some sort.

AS: How is this season going to be different than the first two? And for you, personally?

WP: Yeah, this season... This season we are all just finding ourselves more as women in Los Angeles and revealing more of ourselves. It is still very hard for me to show my private life.

AS: How has your style changed since you first started the show?

WP: When I go to work, I try to be a little more sophisticated, more appropriate in the office than when I was an intern. I could wear jeans and t-shirts then, now I have to look more mature. It's really nice not being an intern anymore. Having the job at a magazine, even if I'm doing the same kind of tasks I was doing as an intern, it's nice to be able to delegate the duties to the other interns.

AS: Who's your favorite designer?

WP Right now... To wear out at night, I love Philip Lim, I love Marchesa and I love Valentino.

AS: Do people come up to you a lot?

WP: Um... not so much. Being in Los Angeles, there are so many real celebrities and real people they don't really care.

AS: What's the weirdest fan interaction you've had?

WP: I remember I got off a plane in Canada, and there were these teenage guys with printed out pictures of me, waiting for me. I didn't understand how they knew I was coming in and what flight I was on.

AS: I feel like reality stars have to deal a lot with people who think they know them. Do you find this is true?

WP: Kind of... a lot of people say, âwe love your character,â and I'm like, I didn't even know I was a character. It's really weird. I try not to freak myself out about it. It's the weirdest thing, I can't explain it. It's surreal.

AS: Do you and your friends have Hills-watching parties?

WP: I get the episode few days in advance and I watch it right away. Usually, just my family and I sit down and watch it together.

AS: Do you ever yell at the television?

WP: I don't yell at it, though I'm sure this season I'm going to be yelling at it.

AS: How has the whole Heidi/Spencer-LC situation been treating you?

WP: I'm not so involved, to be honest. I'm friends with both and try not to be in the middle of things. It's not my problem.

AS: Where do you like to hang out in LA?

WP: I don't go to Hollywood so much. The scene is so overwhelming for me. I hang out over towards Santa Monica, and at bars over there.

AS: If you were going to the Oscars, who would you wear?

WP: I would love Valentino... or Oscar de la Renta.

AS: Lastly, you have very nice hair -- what do you do to it?

WP: I use Frederic Fekkai shampoo and conditioner and then Lanza leave-in conditioner. Usually I'll blow dry it. And that's what I do! 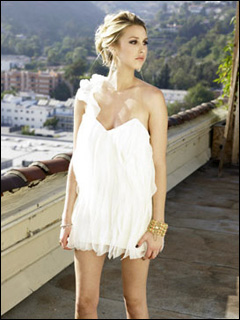