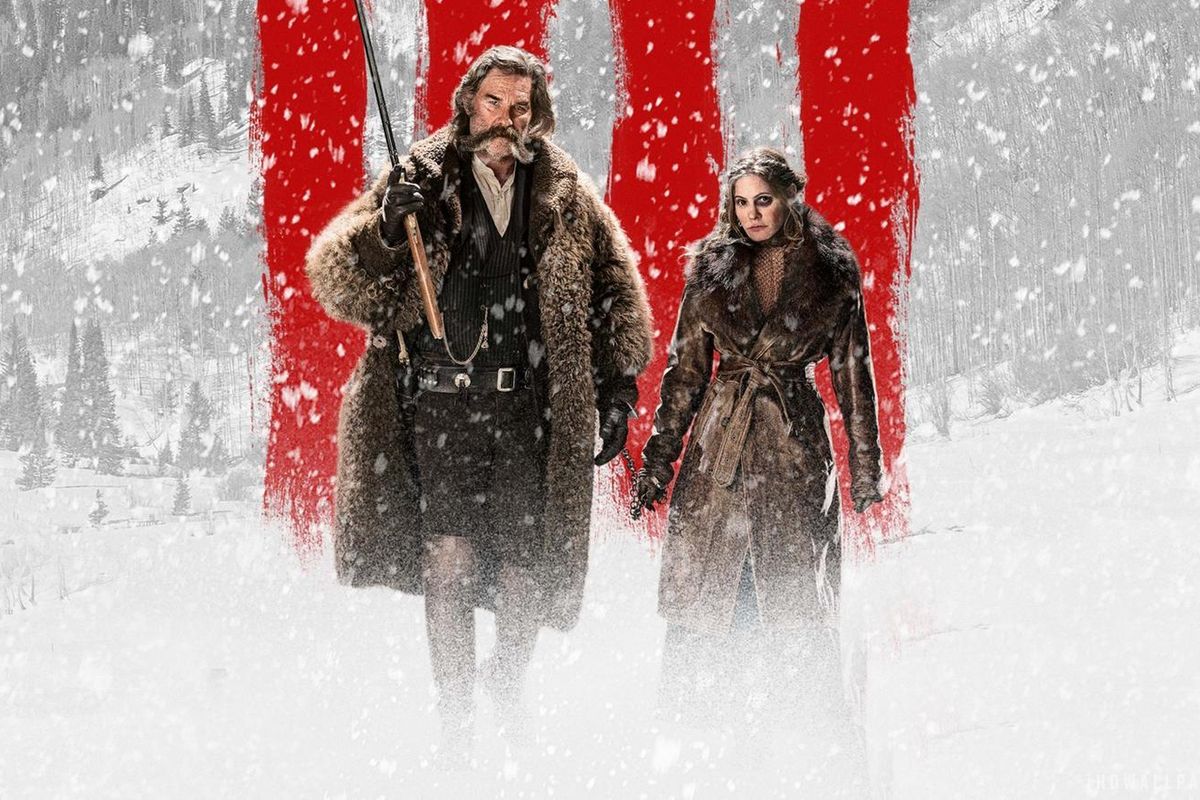 The 6 Must-See Movies In December

From Quentin Tarantino's latest to a fascinating documentary about Hitchcock, here's what to catch in theaters this month.


The Hateful Eight
While others are using their phones to shoot movies, Quentin Tarantino (God bless him) chooses to shoot his violent, ferociously fun, neo-Western utilizing the old ultra Panavision 70 MM lenses. When you think of Panavision you think spectacles like Ben Hur but here is a confined Eugene O'Neil-like chamber piece about a bunch of ruthless bounty hunters set in post-Civil War Colorado trapped together during a snow storm. Kurt Russell plays the crusty John Ruth handcuffed to his prisoner Daisy Domergue (a frighteningly great Jennifer Jason Leigh) transporting her to Red Rock to be hanged, and get a $10,000 bounty. Samuel L. Jackson plays Major Warren, an ex-Union soldier with his own corpses to trade for cash. The other strangers holed up (Bruce Dern, Michael Madsen, Demian Bichir, Tim Roth) are unsavory types who might not be who they say they are. Walton Goggins is quite fun as a lout who claims to be the next Sherriff of Red Rock. There's typical long stretches of crackling Tarantino-sharp/profane dialogue, but when the action finally kicks in during the second half and secrets are revealed it's thrillingly insane. The gorgeous lensing by Robert Richardson gives such depth and beauty that each frame almost vibrates with visual intensity.

Anomalisa
Charlie Kaufman's blissfully strange, thrillingly off-the wall new film based on his "radio play" is about the tragic inner life of Michael (David Thewlis), a man who writes books on customer service like: How May I Help You Help Them. A depressed husband and dad, he's just flown into Cincinnati for a speaking engagement. (Oh, and did I forget to mention this is all done with stop-motion animated puppets, care of Duke Johnson?) Every voice he hears -- man or woman -- is monotonously the same (Tom Noonan) -- that is, until he meets a quirky sales rep staying at the hotel, Lisa (Jennifer Jason Leigh). For a brief time he is convinced that he has found the girl of his dreams. Try to imagine a puppet version of Jean-Paul Sartre's Nausea to get a feeling for this infinitely weird experience. But what's so surprising, aside for the fact that it's often incredibly funny, is how cosmically moving it is, too. Films as unique and mind melting as this are rare and far between.


45 Years
A quietly devastating drama about a loving married couple -- Geoff (Tom Courtenay) and Kate (Charlotte Rampling) -- and the week leading up to their 45th wedding anniversary party. Geoff receives a letter in the mail about the discovery of the body of an old flame, and it ignites a seed of suspicion to grow within Kate. And the more she discovers about the past the more the present becomes as she puts it: "tainted." Andrew Haigh ( Weekend) is great with simple yet powerful observational moments. As the movie progresses, just by watching Charlotte Rampling's extraordinary expressive face you can see the turmoil and unhappiness flashing from her eyes. What's so emotionally ageless about the story is that any relationship can be so easily undermined by doubt and collapse like a deck of cards. Only actors as brilliant as Tom Courtenay and Charlotte Rampling can make such a tale so heart-wrenching.

Hitchcock/Truffaut
When French director Francois Truffaut corralled Alfred Hitchcock for a week-long set of interviews in 1962 while Hitchcock was in post-production of The Birds the final book became a bible to future filmmakers. Director Kent Jones' loving, madly enjoyable documentary includes David Fincher, Wes Anderson, Olivier Assayas, Martin Scorsese and other directors sharing their thoughts on this major book, which was an endlessly fascinating look behind the curtain of America's "master of suspense" who was revered in France as a major artist. This book helped change many people's perception of Hitchcock's works -- the Freudian subtext, the careful mathematical precision of his camerawork, the sardonic way he played audience's emotions. The film clips included and the witty sound of Hitchcock's voice describing sequences from Vertigo, Psycho and others are pure pleasure.

Dementia
An effectively suspenseful psychological thriller directed by Mike Testin about a decorated Vietnam veteran, George (Gene Jones/The Sacrament), living alone and haunted by memories of the war (the young George is played by the excellent Marc Senter). George suffers a stroke, which results in slight brain damage and his estranged son (Peter Cilella) and daughter (Hassie Harrison) show up, fearful to leave George alone in the house and wary of putting him in assisted living. A visiting nurse Michelle (Kristina Klebe) shows up and is immediately hired to assist George at home but something is off about her. Within no time it's revealed that she has a more sinister agenda and George is unable to convince anyone that she is extremely dangerous. The cast is terrific, and the tension really builds nicely to a rather shattering conclusion. Sometimes buried memories can be a blessing in disguise.

Where To Invade Next
Director Michael Moore vacations from the "gotcha" blend of documentary to travel the world and appropriate for America all the things other countries excel at. The shlubby Moore can be annoying and groaningly obvious with his choice of ironic news footage clips but he does get at something fundamentally fascinating here. How Finland excels at education by eschewing homework and systemized testing. How Italians make the work place attractive and family-like by the way they treat their employees. How well France feeds children at school and turns lunch into a learning experience about nutrition and interaction. How Portugal treats the drug problem, or Norway its prisoners. How Iceland prosecuted the bankers responsible for their economic fall. How countries where women are in charge thrive. Sadly, when all is said and done, all these inspiring examples will change little here.