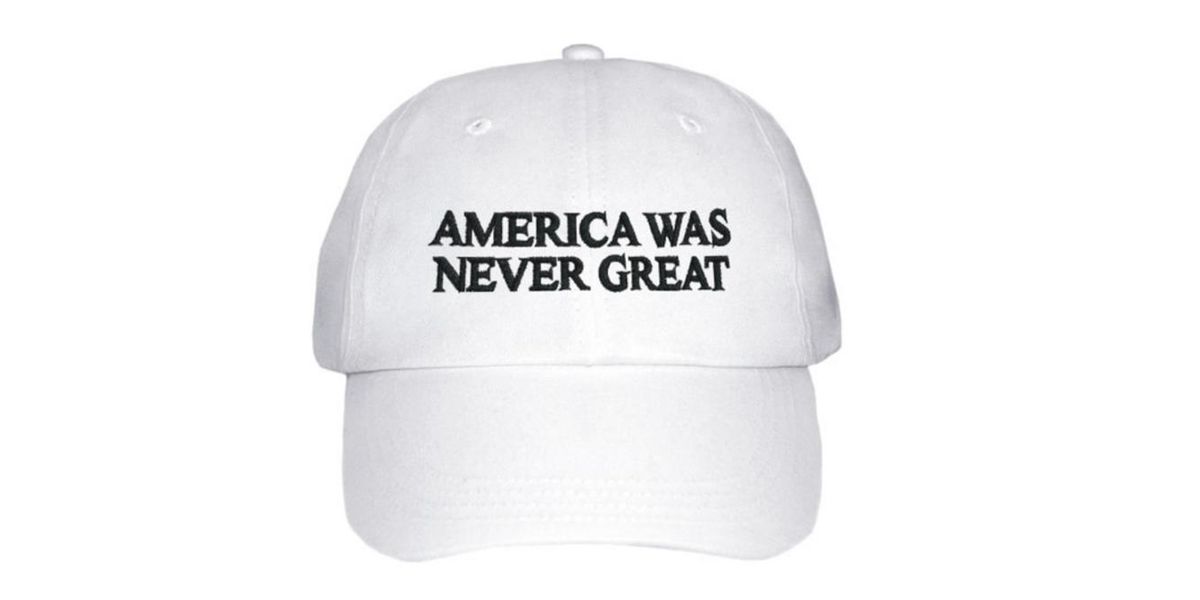 Talking to the Creator of the "America Was Never Great" Hat About Activism, Xenophobia and Patriotism

Earlier this year, 22-year-old Home Depot employee Krystal Lake made national headlines when she donned a cap emblazoned with the slogan "America Was Never Great" on one of her shifts. Sparking a national discussion that divided history-conscious liberals and right-wing Trump supporters (who deemed it unpatriotic), it was an accessory that symbolized the growing partisanship within the American political spectrum ahead of the Presidential Election this fall.

How did Krystal Lake originally receive one of your hats?

We have a couple other co-founders. The company is me and a few other friends -- and one them actually sent the hat to her. But we got online [and set up the online store only] after [the slogan] started really getting big. Before there were just a few others wearing the hat.

So it was a local sort of thing.

Yeah. We're in Atlanta, and the other two [co-founders are] in New York. But we weren't really trying to make it a business. We were just trying to push the movement over there [in NY]. But when they got big, we decided to really make the brand and push the movement.

Where did the idea for the "America Was Never Great" brand come from?

You obviously know Donald Trump -- the presidential candidate with the "Make America Great Again" slogan. [It started mostly because when] we looked back at the history of America, [it's not great]. It was founded on the genocide of Native Americans. It was built on the enslavement of stolen Africans. And the descendants of those stolen Africans are still being treated as second-class citizens to this day -- getting gunned down in the street by government officials, and then back into the prison system to be enslaved again and get free forced labor again. You're saying, "Make America great again." So we just looked throughout the history, and it had never been great.

Would you describe it as a larger movement, not just a clothing brand?

It is definitely a larger movement. So when [Lake stirred up all] the publicity for wearing her hat to work, our sales really increased. [But as far as the kind of people buying them] there's just a wide array. It's not just black people. Not just Native Americans. Not just Hispanics. It's white people. It's Asians. It's all different races coming together.

Why did you decide to start with apparel?

Donald Trump looks so goofy with his "Make America Great Again" hat. So we wanted to make some cool hats [as satire]. We're going to speak the truth on some cool hats just to combat what he's doing.

Fashion is, after all, inherently political. Obviously, a big argument from a lot of the anti-"America Was Never Great" crowd is that it's sort of ungrateful and unpatriotic. But I'm curious to know, what do you typically say to refute the haters?

In my opinion, I think it is patriotic, because it's honest. It's patriotic because our goal is not to hate on America, our goal is to improve America and make it better by speaking the truth. So if somebody sees someone with an "America Was Never Great" hat on, it's going to spark a conversation. So if your opinion is that America was always great or that it was great in the past, and you see somebody with an "America Was Never Great" hat on, you can ask them, "What do you mean?" And they are going to give you their opinion. Then it could start a healing process. The people [collectively] have more power than elected officials, so it will be better. We can be honest with each other.

So, do you include a statement anywhere with the orders you send? Just to make sure the people who are buying your merchandise are well-informed and able to articulate these ideas so the movement can progress?

Yeah. That's primarily why we contacted a few magazines and newspapers -- just so we could [articulate] the mission statement behind the movement. We are talking to you today. We are going to talk to a few other newspapers and blogs so people won't be confused [and there won't be any] miscommunication about what this statement means.

Hoow big was the initial uptake in your sales? And is it still rising as other xenophobia-fueled events like Brexit happen around the world and also make the possibility of Trump getting elected seem more feasible?

Yeah. The sales have just really peaked. But the most there's been is 20 orders in one day. That's a lot in our opinion, but it's still steadily increasing.

We had a few orders from England actually -- and then I saw that on the Google analytics on the website, it's people from everywhere around the world coming on to the site.

Talk to me a little bit more about the social media trolls, death threats and threats to shut your company down. I'm sure there are a ton.

You got the people on top -- a lot of close-minded people. That's not the people who founded America, but that people who were dealing in slavery, like the slave masters. Looking at [other] people like second-class citizens. [So if we let them keep thinking that way] America stays the same. It doesn't get better. So we're planning on educating them. That's the goal -- to educate them so we all can come together and have power as a collective, united people.

So you aren't concerned about your safety at all? To some extent, you not telling me the other clothing brands or other identifying information indicates to me that this is actually dangerous. Not to mention Krystal getting death threats.

My other businesses are already doing what they're doing, so I don't want to mix them. That's more business, [this is more] personal. I'm not really critical of anything because to make a statement like this...it's the truth. So how could you be afraid of speaking the truth?

Do you have an activist background? Have you volunteered with any other movements? Are you involved with Black Lives Matter?

Are you worried at all about getting sued by Trump, whether it be for copyrights or defamation?

No. Actually, I'm looking into copyrighting our statement. "Make America great." I would value a copyright on that.