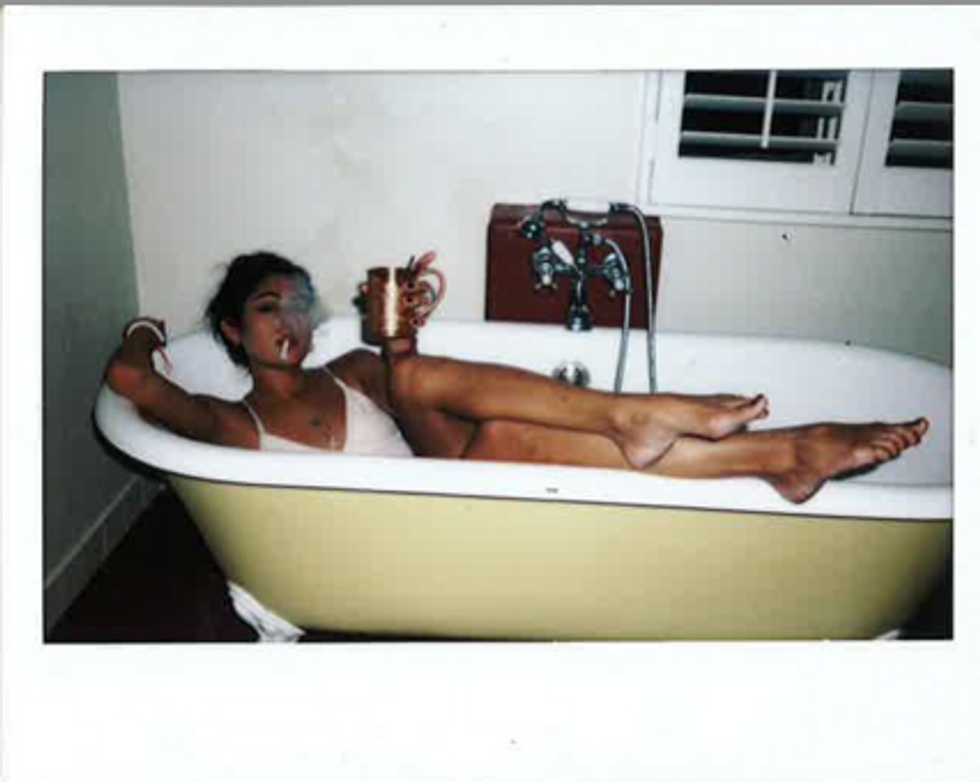 The Coolest Person In The Room: Zha Zha Vi

By Sandra Song
PAPERMAG
In our new column, "The Coolest Person In the Room," we're asking our favorite nightlife pros (hosts, DJs, door people, promoters, bar/club owners, club kids, bartenders, socialites) to tell us about who they think is the one party person whose look is always on point, whose energy is contagious, and whose scene is worth checking out -- basically, that person at the club who they've got their eye on and think we all should know.
In each installment, the previous "coolest person in the room" will pass the baton and nominate someone else. Previously we featured Miss Laina Baby and she's been kind enough to nominate our next 'Coolest Person in the Room,' Zha Zha Vi.
Who is this person?
Zha Zha Vi
Why do you love this person?
Zha Zha is one of the most chic people I know. She can make a pair of leggings look like they're $5,000 and from Bergdorf's. She's also very sweet and takes care of all her friends, but isn't to be messed with. Definition of a bad bitch.
What makes them unique to nightlife?
Zha is important to nightlife not only in NY but literally anywhere she goes.
When was the first time you met them?
I met her at some art party in Red Hook after she had just gotten back from divorcing her Italian husband and we instantly became friends.
We wanted to find out a little more about Zha Zha though, so we FaceTimed her from her vacation spot on a beach in Mykonos, Greece to find out about her craziest party experiences. And in addition to a few "Grecian nudes," we learned that Miss Laina was right re: "People spend years just trying to get a selfie with whom Zha can make friends in a night."
Where do you like to go out?
Usually I don't like going anywhere, because I hate people, but if I have to go somewhere I like to go to more low-key places like Acme, Happy Ending. I also like to go places where people don't know me like Rose Bar or [places where I can] be by myself. I love Never Never, right next to Up & Down. It's nice because all the random people from Up & Down [aren't there]. I don't know. I just like going out in Mykonos.
Oh right you're in Greece right now. How's that? Do anything crazy?
Not so much crazy. I just picked up rosÃ©, I've never drunk rosÃ© in my life.
Pre-game rituals?
Not so much. Just chug a bottle of vodka.
You're in LA now, right? Why'd you move?
Yeah, I was in New York before. I'm just checking out LA right now -- though to be honest, I'm over NYC actually.
What's your wildest party story?
Honestly every single night is so fucking crazy, I can't even remember because I black out all of them out. I don't know how I end up in half the situations I do. Maybe like my first Fashion Week in New York -- that was just batshit because I didn't know anyone and late nights with the ATL Twins are always crazy -- they're like my little children. I actually was in [Paper's] Fashion Week feature with them, but I think I was just "some girl giving them sensual back massages." [laughs] Or that one time I had a fake marriage to A-Trak. Or maybe the Hamptons last summer. I went for the first time last summer and I went from literally like taking over the Hamptons to getting kicked out of the Hamptons -- I'm not allowed anymore. And I just went from being the new girl there who no one knew and then it became just like too much, like I got too much "princess treatment" that a lot of people were like hating on me and it got to where I was kicked out and banned from places.
Uh, can you tell me more about your fake A-Trak marriage though?
I think he found me on Twitter or Instagram or something and then started messaging me and then he was playing a show out in the Hamptons and then we had this cute little crush thing and we were going to have this fake marriage so I bought him a cake and he asked me to come out. We had our little fake wedding and then we drove back to the city.
Wow.
Yeah. Maybe my favorite though is like falling in love with the Prince of Monaco my first Fashion Week. We locked ourselves in his hotel room for like four days, totally skipped Fashion Week, literally ordering thousands and thousands of dollars of room service -- like bottles of Grey Goose and insane everything. Jesus, I don't know.
Wait, the Prince of Monaco? So all that Grey Goose came courtesy of the people of Monaco?
No, no [laughs]. That's my nickname for him. His family is like best friends with the Prince of Monaco. It's just a cute, little nickname. But that was cute. We fell in love. We're still in love...I'm waiting for him to come rescue me.
[Ed Note: Zha Zha emailed this after our chat]
You May Also Like
Music