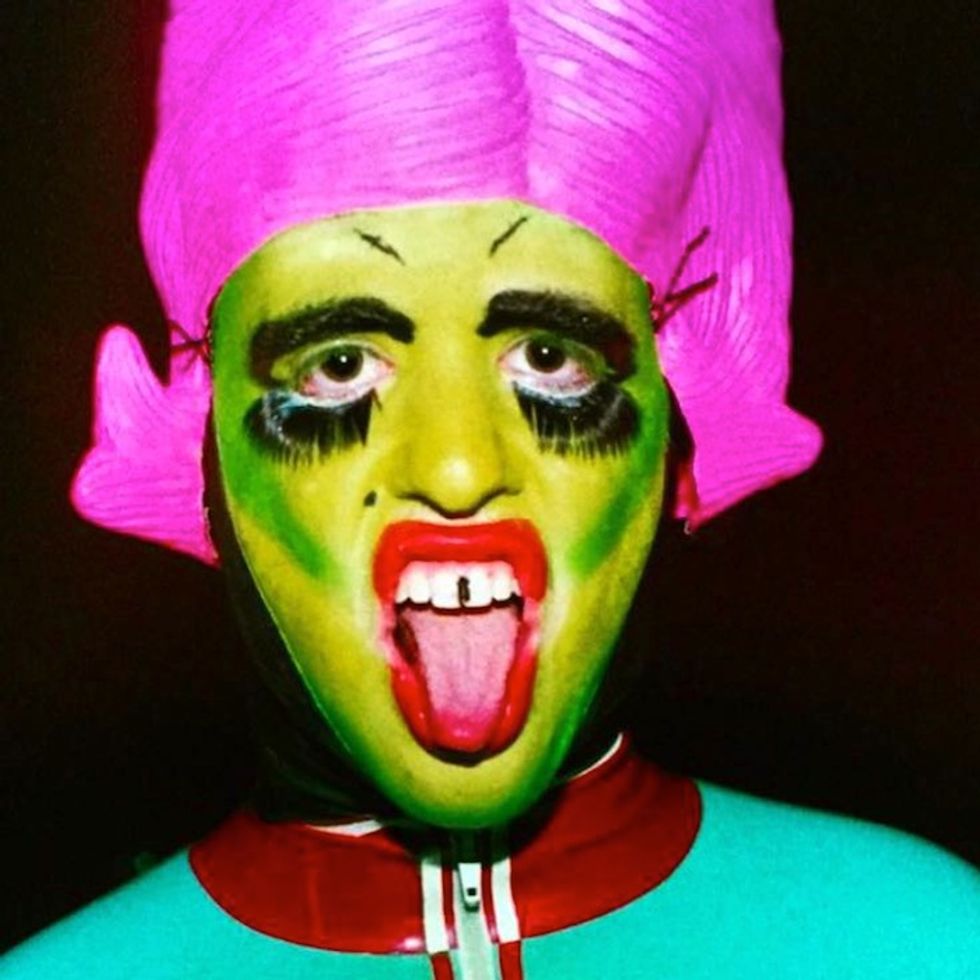 The Coolest Person In The Room: Sussi Suss

By Queen Sateen
PAPERMAG
photo by Metagasm (Facebook)
In our new column, "The Coolest Person In the Room," we're asking our favorite nightlife pros (hosts, DJs, door people, promoters, bar/club owners, club kids, bartenders, socialites) to tell us about who they think is the one party person whose look is always on point, whose energy is contagious, and whose scene is worth checking out -- basically, that person at the club who they've got their eye on and think we all should know. In each installment, the previous "coolest person in the room" will pass the baton and nominate someone else.
Last week we featured Queen Sateen and she's been kind enough to nominate our next 'Coolest Person in the Room,' Sussi Suss.
Tell us about Sussi Suss.
Sussi Suss is a club kid in the NY and Brooklyn nightlife scenes. He can be found frequenting all of the fun weeklies, like Westgay and DUH! at Up and Down. He hosts these parties from time to time, but even when he isn't working he goes out almost every night with gusto!
Why do you love him?
Sussi spares no expense when it comes to the looks that he serves. He is extravagant in every sense of the word. When you see him in the club, he is this massive presence -- literally, he is close to 7 ft tall in his platforms and he has this lumbering physique. He piles on the tackiest clothing and accessories, slathers on some face paint and it is honestly gold.
What makes him unique in nightlife?
In nightlife, people tend to take themselves and their looks very seriously. Sussi is less of that school of thought and more of the belief that color and fun gimmicks make the best looks. One time, he came over before going out and I literally fell on the floor hysterically laughing because he had so many offensive accessories on. He was wearing a green wig in braids with a head microphone (a la Britney Spears), flowers on his tits, two garter belts (a black and a white one), a pink bondage tie around his chest and a holster with little, pink plastic guns in it. Like Coco Chanel before us, [my husband] Exquisite and I insisted that he take at least one item off before he left the house.
When was the first time you met?
I remember seeing Sussi back when he went by "Babyfagg" at a party at the Museum of Sex. We were familiar with each other, but we had never chilled in earnest. I remember saying to him, "You know, I Googled you and the first thing that came up was your Bar-Mitzvah video...and I watched it!". He let out a shriek and ran across the room. After that, we all went back to his lavish hotel room where his posse proceeded to order silver trays overflowing with Babybel cheeses from room service -- eventually everyone ended up in the bath tub. We have been besties ever since.
What is your favorite memory of Sussi?
The moment that really stands out to me is when Exquisite, Sussi and I all threw a party together called "Female Trouble." It was at China Chalet, this Chinese restaurant turned nightclub, and everyone was there. Exquisite and I were wearing angel wings and our band "Sateen" performed and premiered the music video for our song, "Treat Yaself." Sussi ran around dressed as a pink poodle. We all swirled and we twirled all night on the dance floor as Gabriel Held, De Se and Mess Kid DJ'ed. It was a magical evening!
You May Also Like
Film/TV