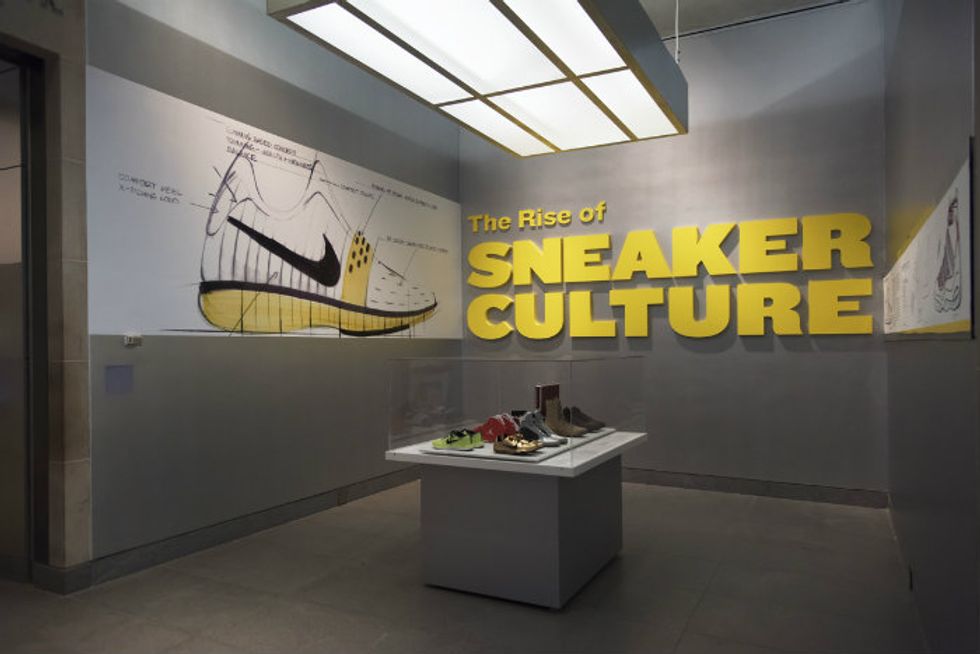 by David Turner
PAPERMAG
(photo via The Brooklyn Museum/Jonathan Dorado)
Last weekend the Brooklyn Museum opened up a new exhibition called "The Rise of Sneaker Culture," which featured over a hundred pairs of sneakers from 19th century athletic shoes to the latest pair of Kanye West's Yeezys. The show, curated by Elizabeth Semmelhack, understands that attempting to tell the entire history of sneakers in one exhibition would be a high-topped order. Instead, "The Rise of Sneaker Culture" focuses on the way sneakers weaved their way into American society -- particularly through black American culture.
The show follows a pretty linear timeline of sneakers from the late 1800s to 2015. As novel as it was to see pre-WWII basketball high-top and early shoes from companies like Keds and Converse, the 1960s is where the timeline raises real questions. That is where Adidas styles like the Gazelle, Samba and the Stan Smith are first seen, shoes that remain so much in vogue that versions of those styles could be seen on people's feet around the exhibition. It's refreshing to see just how enduring some of these styles remain, even a half century later. The sense of "what's old is new again" did not stop in the '60s with the exhibition, and in fact became even more heightened in the '90s, when companies consciously reissued retro editions of sneakers.
About halfway through the exhibition there is a sharp change: The introduction of hip-hop. The culture that is so connected to sneakers first appears in the exhibition with a mid-80s video loop of Run DMC talking about their groundbreaking hit "My Adidas". The shift towards hip-hop demonstrated sneaker companies' interest in black inner-city markets, as youths already sought out shoes but now saw some of the biggest voices of this burgeoning genre as unofficial -- soon to be official -- brand evangelists. And sneaker companies had already found some success tapping into black youth earlier in the '80s, through professional basketball players.


A photo of the historically black fraternity Alpha Phi Alpha basketball team from the late 1920s is placed early in the exhibition to draw an early line between black basketball culture and sneakers. The early high-top Converses on display proved sneaker companies cared about basketball well before black players were even allowed in the NBA, but the early '80s saw a shift. Nike's Jordan line of sneakers, named after Michael Jordan, the then-young Chicago Bull, pushed the style of NBA-approved sneakers -- color (!) -- and, with intense marketing, made Jordans the shoe for someone passionate about sneakers. Jordan and hip-hop's influence on sneaker culture turned the rest of the exhibition into a study on the last thirty years of black youth culture.
The shift is a slightly harsh pivot, when one steps back to remember just how many cultural boundaries and lines are crossed with sneakers. There is little mention of women's shoes despite the number of women that could be seen in the exhibition on opening weekend. And the almost exclusionary focus on basketball reduces the sneaker subculture of other sports like skateboarding. Still it's hard to underestimate the power of the cultural force the sneaker industry found in the lifestyle of black inner city kids, which those companies marketed to white children across the suburbs of America.
Nike Air Jordans. (Photo via Kathy Tarantola, courtesy American Federation of Arts)
Thus, multiple walls are devoted to the entire Jordan line of shoes, there are clips from the early hip-hop documentary Wild Style, a Missy Elliot video, and multiple rapper-designed shoes, all appearing alongside luxury brands attempts at sneakers. The video monitors displaying mid-70s tennis matches of Stan Smith, Jimmy Connors and Arthur Ashe, though only a few steps away, feel distant from post-Jordan sneaker culture. Museum cards mention the irony of these billion-dollar brands selling the coolness of black youth back to the rest of America -- but the exhibition still appeared to take advantage of that cultural trade. The show sidesteps many of the criticisms faced by shoe companies (particularly Nike) over the working conditions that allowed these shoes to become global products.
The disconnect is amplified when so many of the last shoes displayed were more likely to be found at Barneys than a sneaker shop in Brooklyn. Progress appeared limited to the form of the sneaker rather than the youths who popularized and wore them. Instead of the latest LeBrons, KDs, Adidas or even some of the throwbacks done recently by Reebok, the final shoes are higher end collaborations with designers like Raf Simons, Jeremy Scott and Rick Owens.
Converse Rubber Shoe Company. All Star/Non Skid, 1917. Converse Archives. (Photo: Courtesy American Federation of Arts)

They're interesting novelties, but when so much of the show focused on sneakers worn on playground courts or by professional athletes, the time spent on Visvims and shoes with a handful of known copies feels less a part of sneaker culture and more flaunting of what the museum could acquire. "The Rise of Sneaker Culture" succeeds on its goal of showing the progression of American sneaker culture, but when the last shoes shown were ones that cost the amount of rent for a New York City apartment, it became clear its definition of sneaker culture lost its universality along the way.