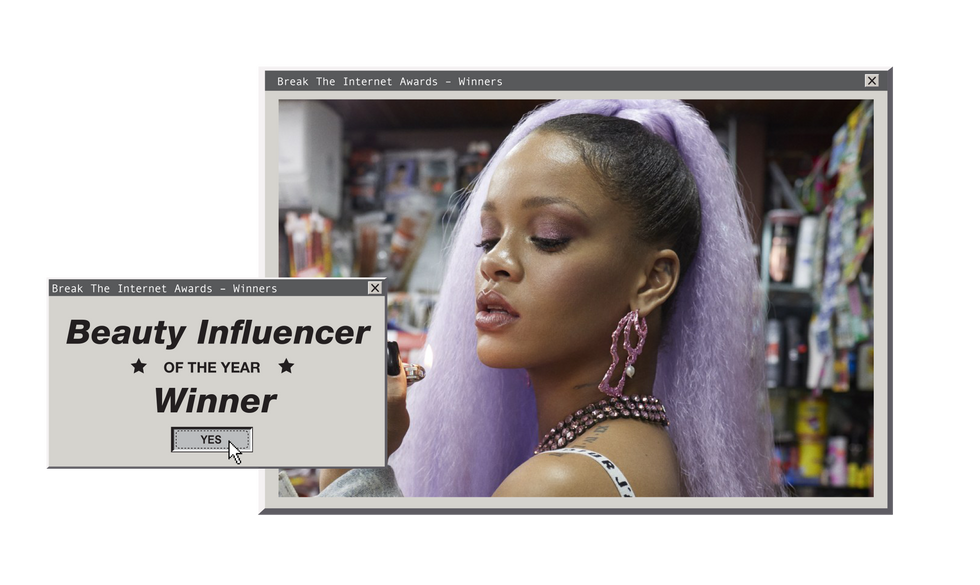 With the launch of one of the most popular cosmetics labels in the world today, Rihanna became an important voice for an entire community otherwise almost completely ignored by the beauty industry. Offering over 40 shades of foundations accounting for almost every skin color, Fenty Beauty set a standard within the industry that has for decades has only treated diversity as an afterthought. Now with its multiple range of highlighters, bronzers, blush compacts and lip glosses, the singer has also expanded the business to a fashion label under LVMH. Today, Rihanna is one of the best selling music artists, fashion entrepreneur and undoubtedly, the beauty influencer of the year. ––Jeena Sharma 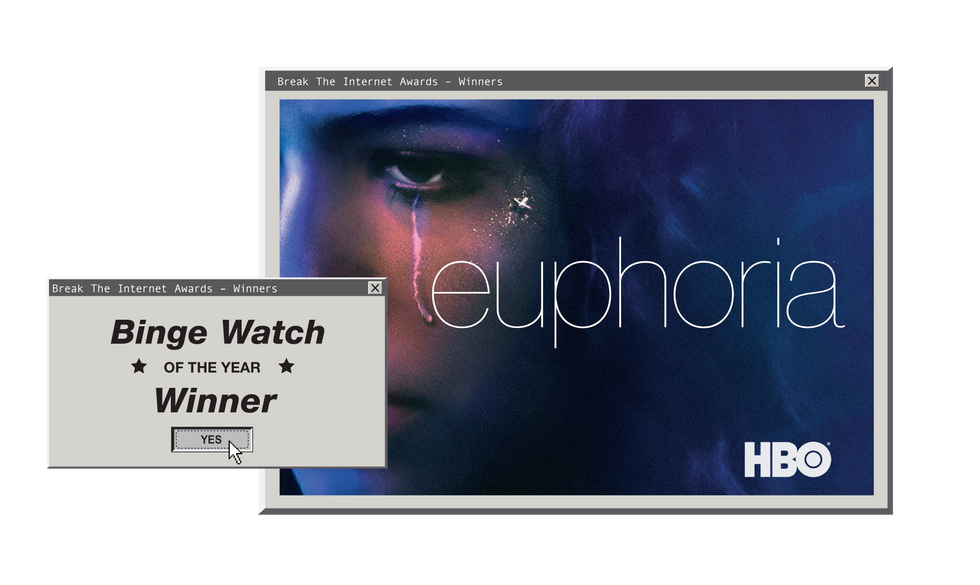 When HBO's latest teen drama, Euphoria first hit the screens last summer, it bolstered the young demographic of suburban America that otherwise existed outside of the mainstream. Unlike many other Hollywood executives, creator Sam Levinson wasn't interested in token representation or ticking boxes, but an unabashed portrayal of struggles that actually plagued teens across America today including addiction, mental health and identity issues. Of course, that was never an easy task as it no doubt invited the scorn of conservative parents who deemed the show's often explicit content "inappropriate." Regardless, Euphoria hit a chord with a generation that is on the constant outs with boomers and older millennials alike, leading into a swift renewal into the second season. ––Jeena Sharma 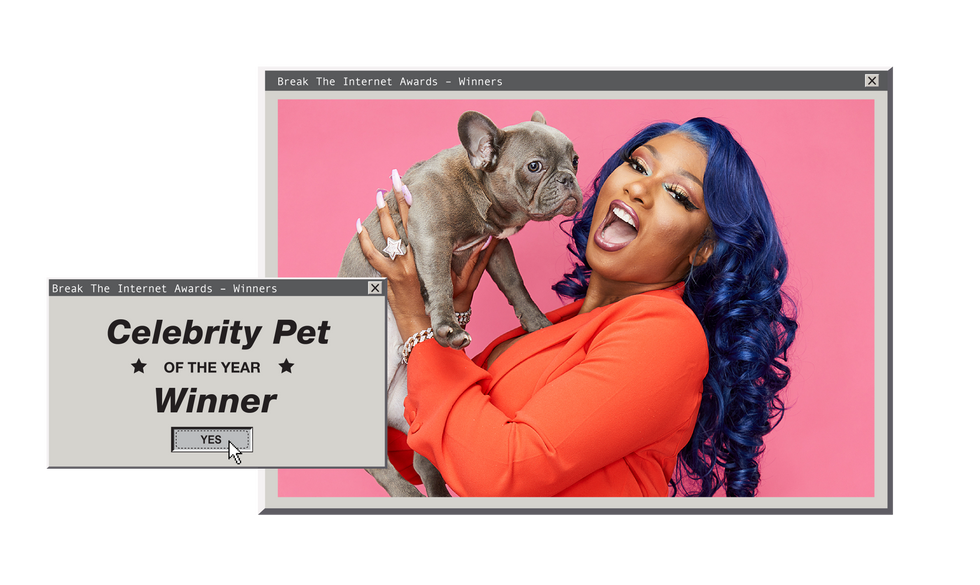 Foe Thee Frenchie, leader of Hot Dog Summer and First of his Name truly has the life we all want: Jet setting by day and cuddling up to Megan Thee Stallion by night. With too much personality for mama Meg's Instagram, he finally tired of sharing the spotlight and made his own account in August of 2019. Honestly? It has been a gift to us all. He keeps his paws on these other girls' necks with sponsored posts some human influencers would kill for, takes regular trips on private jets and goes on designer shopping sprees. Hot Boy 4oe truly outsells any other bitch on Instagram and if you're not following I feel bad for you. Real hot dog shit only. ––Taylor Roberts 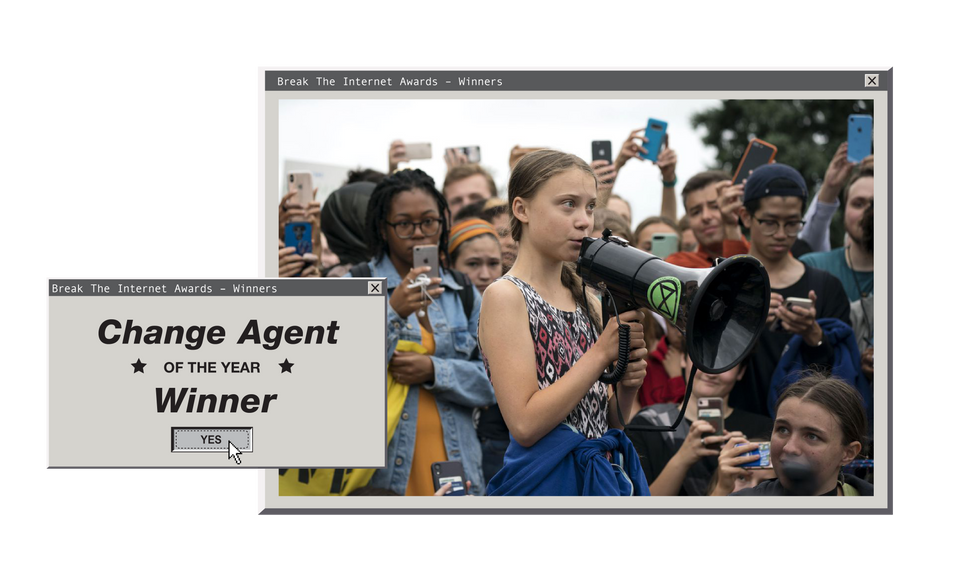 We shouldn't need Greta Thunberg, and she'd be the first to admit it. The scientific community has been united in its concern over climate change for the past 40 years, issuing dire warning after dire warning. No one listened –– not the boomers, not Gen X, not millennials either. Now Gen Z is fighting to save the planet against worsening odds, with Thunberg as their leader. Over the past 12 months, the 17-year-old has led global school strikes and held her own against Trump on Twitter. It's hard to feel hope right now, but she's a powerful reminder to channel fear into action. ––Kat Gillespie 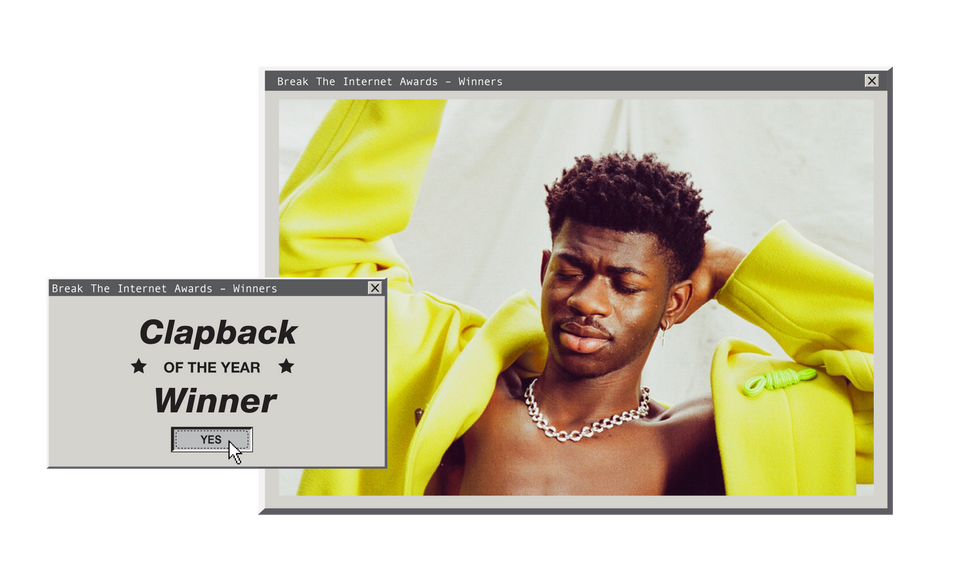 Lil Nas X's meteoric rise to Billboard chart domination did not come without some haters — read: racists. As soon as his debut bop, "Old Town Road," started taking off, the song about riding a horse 'til you can't no more was deemed "not country enough" and briefly removed from the country music charts. Thankfully everyone from fans to music critics to Billy Ray Cyrus himself refused to stand for the Nas X erasure and Billboard reversed their dumbass decision. The clapback of it all? Nas X's "Old Town Road" went on to sit on the iron throne that is the music charts for a record breaking 17 weeks. His is arguably the most impressive entry into the music industry. And that's on yeehaw. ––Taylor Roberts 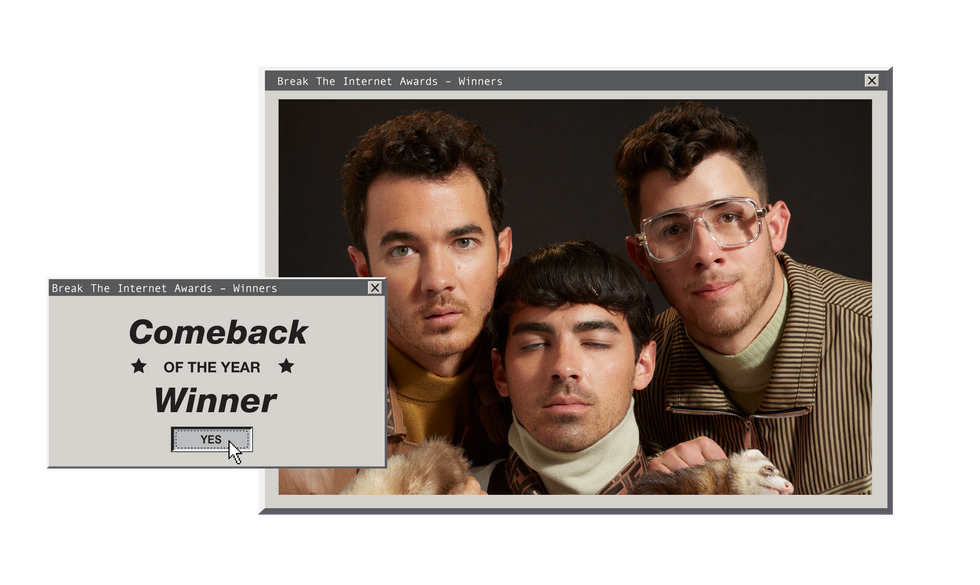 It was the Jonas Brothers' internet in 2019, we were just scrolling through it. Even before the official comeback, their deliciously gossip-worthy parade of nuptials found us unwaveringly invested in Nick, Joe and Kevin's lives and careers, six years after the band broke up. When their blissed out summer bop "Sucker" went No. 1, becoming the biggest hit by a boyband in 15 years, it was clear that the Jonas Brothers reuniting in 2019 wasn't a glitch in the system. Having grown up, gotten laid, chilled out and set their fraternal feuds to rest, the trio was free to become the stars they were always capable of being. ––Jael Goldfine 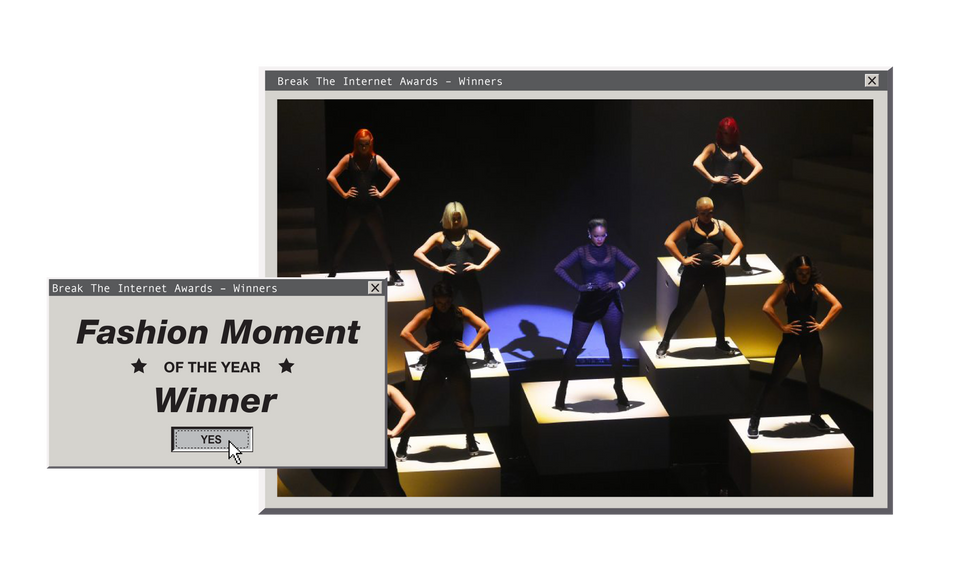 To say that Rihanna simply changed the fashion game this year would be a huge understatement. The superstar seemingly touched every corner of the industry, from her historic Fenty luxury brand launch with LVMH to the continued success of her beauty empire. But no one was quite prepared for what Rih had up her sleeve on September 10, when she staged an epic 40-minute fashion-entertainment blowout in Brooklyn for her revolutionary lingerie line Savage x Fenty. The show was held during New York Fashion Week, but spectators had a strong suspicion this would be no ordinary runway. A slew of hitmakers of the moment like Halsey, Migos, DJ Khaled and Big Sean performed with the likes of Normani, Aquaria, Bella Hadid, Laverne Cox and the diverse cast of models that commanded the runway in the brand's inclusive and body-positive lingerie offerings. And best of all, the show was made available to watch via Amazon in over 200 countries, allowing people everywhere to partake in the magic and mystique of one of the most important shows of the year. ––Mario Abad 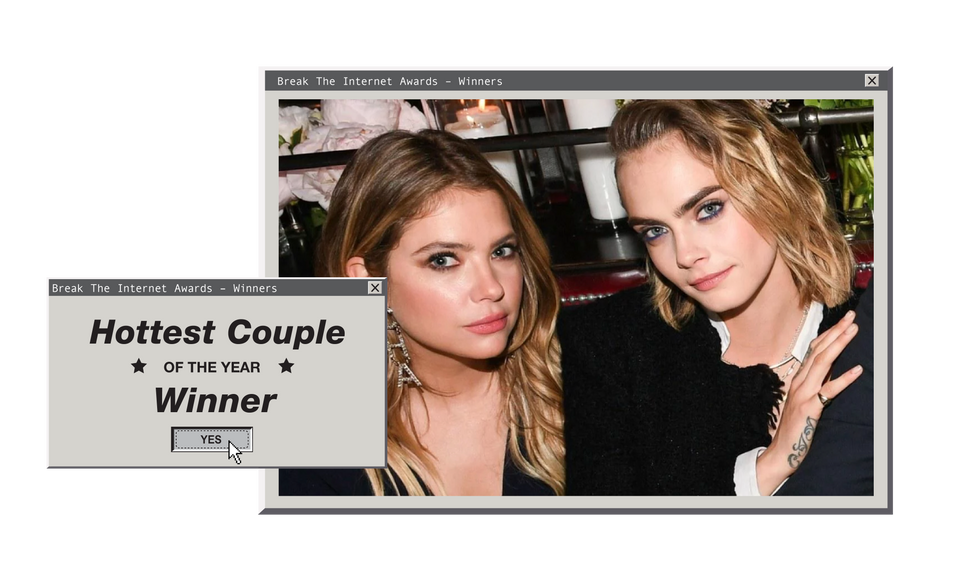 Where were you when Cara and Ashley gleefully carried a big ol' sex bench into their Los Angeles home in full view of the paparazzi? It was the best possible way to confirm a rumored love affair between the models slash actresses, and they've only delighted us more in the months since –– with a rumored proposal in France, a sweet Pride-themed Instagram post and a briefly terrifying Twitter hack moment. The sex bench was supposedly a gag gift for a friend, but that's somehow even cooler. We love love. ––Kat Gillespie 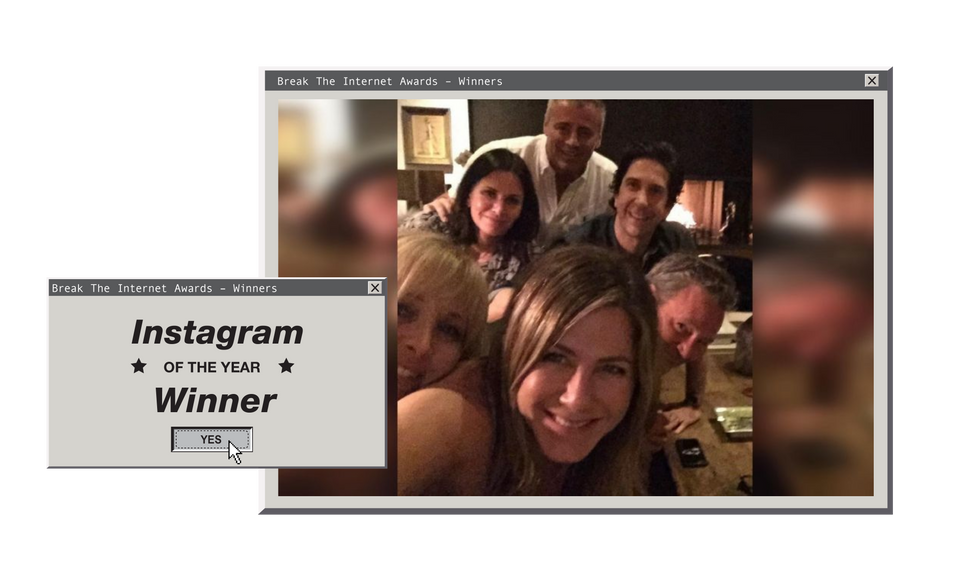 As the Seinfeld bros will tell you, there exist many more elevated sitcoms than Friends. True fans don't care. Like a Central Perk cappuccino served in an oversized mug, the NBC hit is comfortingly frothy –– a tacky '90s throwback to be enjoyed on your laptop after a hard day under neo-fascism. Jennifer Aniston's nostalgic new Instagram account, which is heavy on the cast reunion photos, extends the escapism onto social media. And thank God, because her breakout show was recently removed from Netflix. ––Kat Gillespie 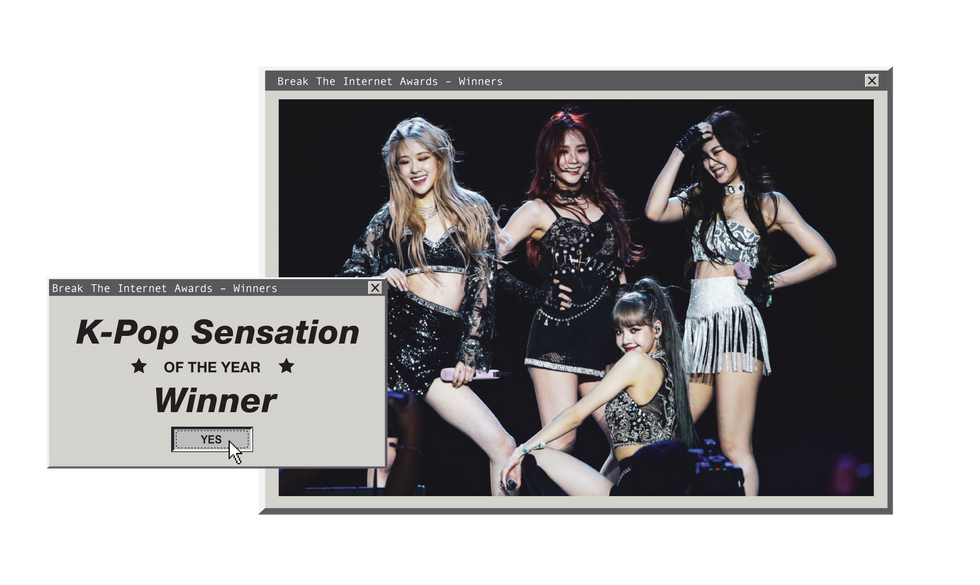 When it comes to global sensations, BLACKPINK is one of the biggest. The triumphant horns of "Kill This Love," alone, prove the group won't go down without a fight — and it's clearly resonating. At 265 million streams and counting, the song is a heroic call-to-arms for all to torch their toxic relationships and leap into their power. Not to mention, the "Kill This Love" video beat out Ariana Grande for the biggest-ever music video debut on YouTube at the time, racking up 56.7 million views in its first 24 hours live. Beyond that, the kinetic live performances of BLACKPINK members Jisoo, Jennie, Lisa and Rosé further establish them as a bonafide music force to watch (did you see them historically killing it at Coachella?) Plus, as globally famous Asian women, they bring a refreshing and new kind of supergroup to the table, making more room for others to follow. ––Michael Love Michael 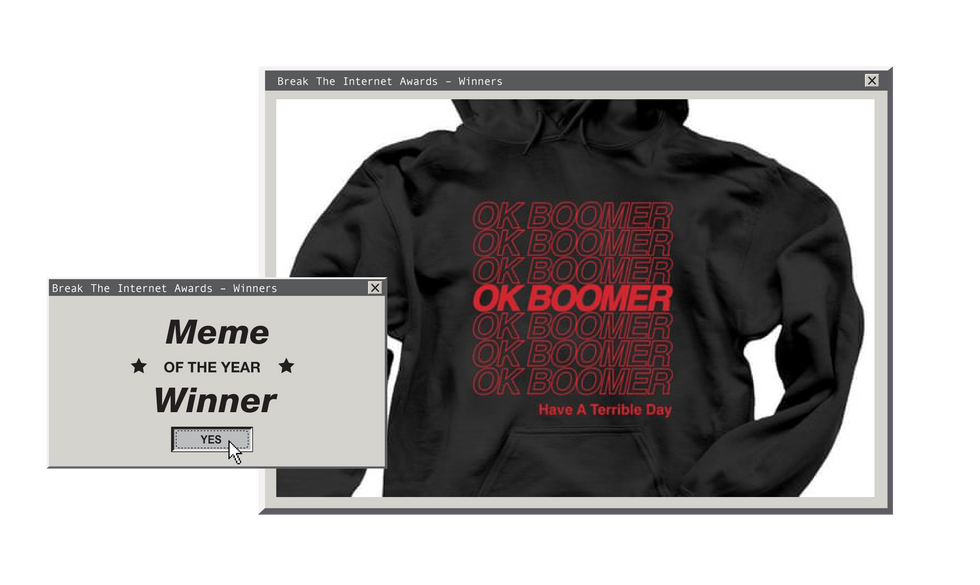 Peter Kuli and Jed Will's "ok boomer" is Gen Z rock 'n' roll, the antithesis of normative radio-ready trap-pop and a foot-in-the-ass to adults everywhere. A fusion of blown-out bass and punk vocals, "ok boomer" is scrappy and abrasive, but spawned a phrase so much more versatile than just the single. The intergenerational digital war waged by the track was fierce, but more than anything, it gave teens a quick shutdown for their older online opponents. No argument and no politician's Twitter mentions are safe from the wrath of "ok boomer," and honestly, the internet is a better place for it. ––Brendan Wetmore 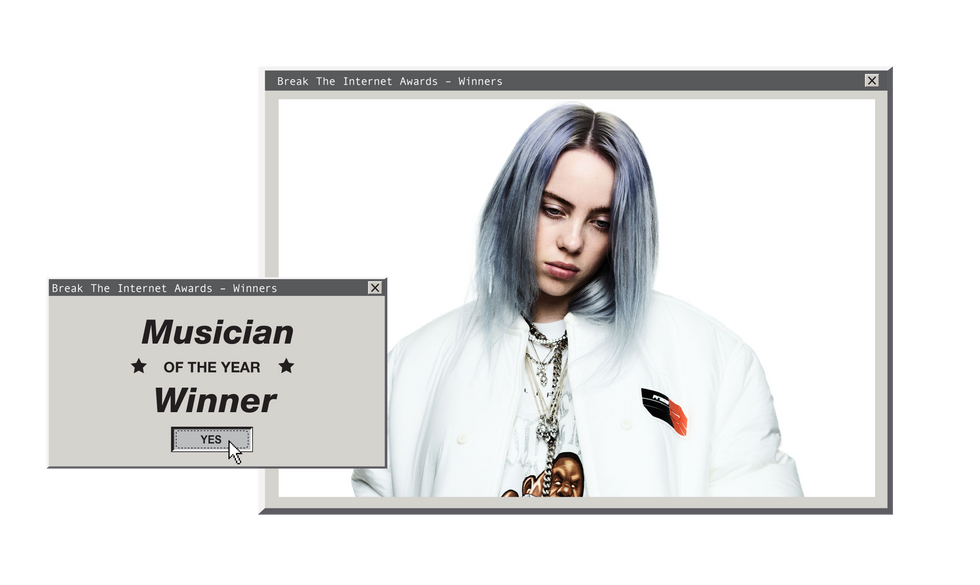 Billie Eilish whispered, growled and slurped her way into our hearts last year. She shook up our previously static notion of what a teenage hitmaker can look and sound like, reviving our appetite for good old-fashioned pop weirdness. The rabid internet obsession with her every move is evidence of just how badly Gen Z was craving an alternative woman artist –– their own Avril Lavigne in basketball shorts, amidst a sea of bodysuited, big-haired divas. Based on the kinds of risks she took When We All Fall Asleep Where Do We Go and how far it brought her from "Ocean Eyes," 2019 is just the beginning of EIlish's disruption. ––Jael Goldfine 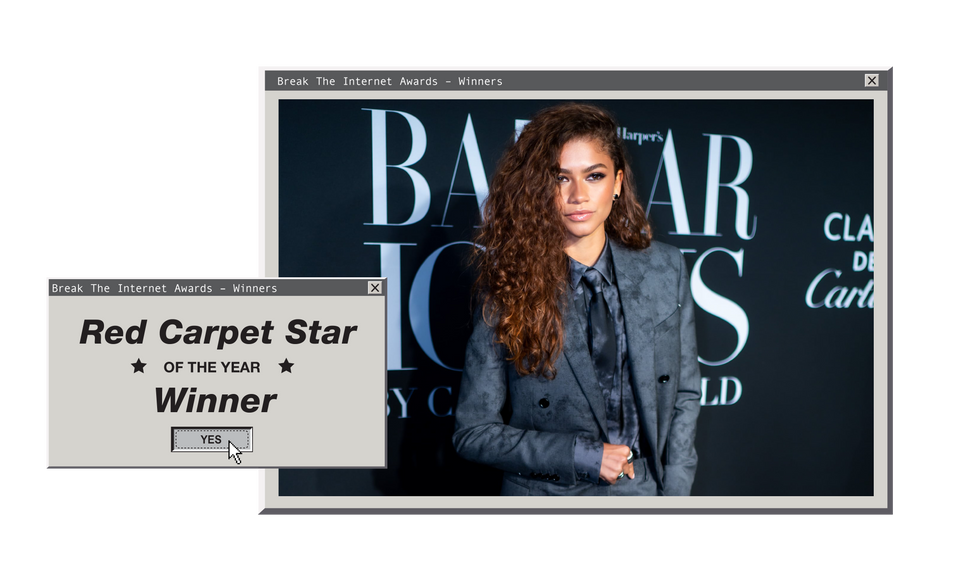 With a daring approach to evening wear and natural affinity for risk-taking, Zendaya was the indisputable queen of the red carpet in 2019. Her fruitful partnership with longtime stylist Law Roach has paid dividends as she evolved quite rapidly from budding teen star to leading Hollywood actress. While other celebs may have had more outlandish and one-off style moments that went viral, the Euphoria star managed to serve consistently high-fashion looks year-round, always surprising us with how equally comfortable she looks in a striking Berluti pantsuit as she does in a Poison Ivy-esque Vera Wang bustier dress. And how could we forget her playful Cinderella moment at the Met Gala, capturing everyone's hearts with her magic wand and glass slipper? From movie premieres to awards season to talk show appearances, Zendaya proved that celebrities shouldn't have to take themselves too seriously to make a fashion statement. It's that sense of versatility and adaptability that cemented her status as the red carpet's leading lady. ––Mario Abad 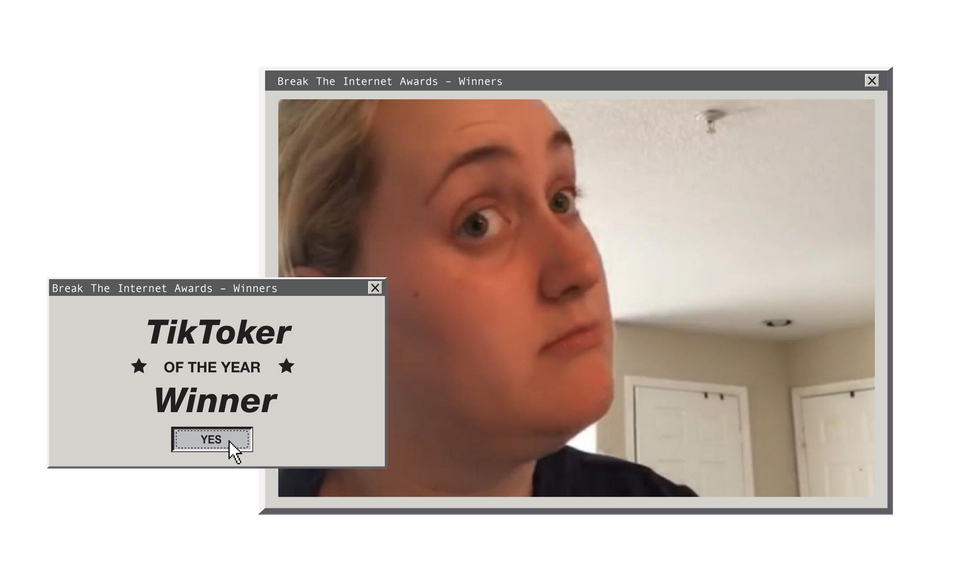 Even if you don't know her name, you know her story; also known as Kombucha Girl, Brittany Broski took the internet by storm in 2019 with her wit, charm, and of course, distaste for kombucha. Brittany's rise to fame has truly captured the new influencer frontiers of TikTok, demonstrating just how random –– and yet, correct –– virality can be. Now, give her a damn television show, Comedy Central. ––Brendan Wetmore 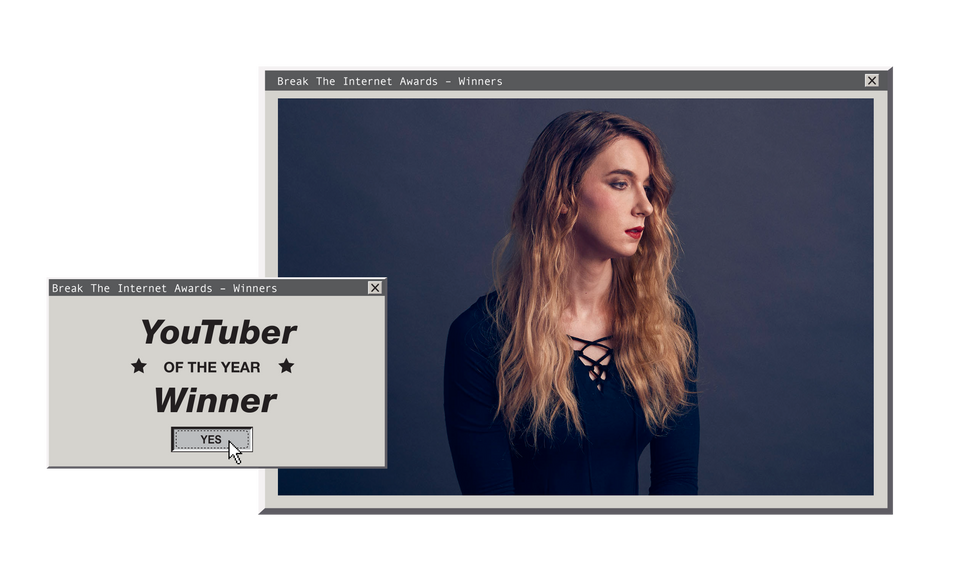 It's easy to take a default political position without interrogating why you feel a certain way about whatever hot button topic. Luckily, Natalie Wynn's philosophy YouTube channel ContraPoints is here to help. Rather than repeating the same old hashtags, ContraPoints encourages precise thought about (New York Times podcast voice) the big issues that divide us. Wynn's in-depth explainer videos engage viewers with costumes and quips, interrogating everything from capitalism to cancel culture — a topic she has wide perspective on, having been cancelled numerous times herself. Wynn is a contrarian minus the Pepe memes and tasteless Reddit trolling; she knows her shit, and how to argue it. We needed her in 2019, and we'll keep watching into 2020. ––Kat Gillespie