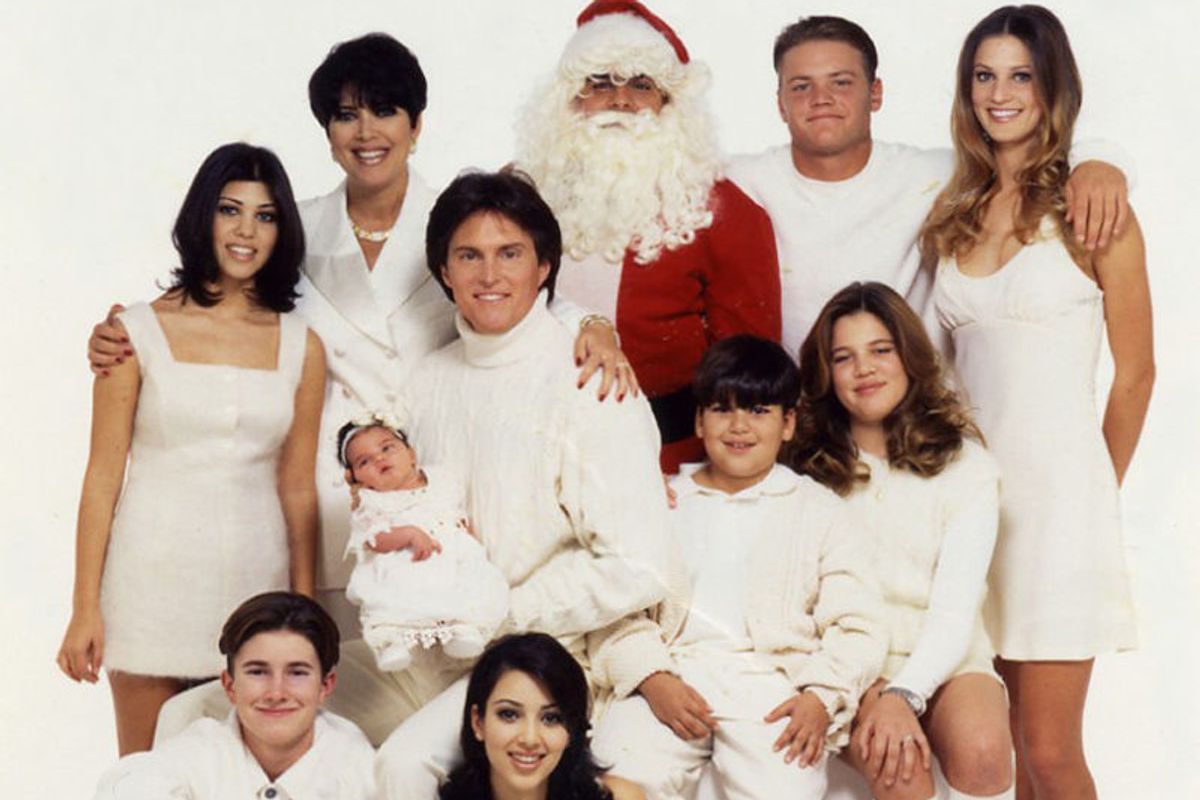 'Tis finally the season for terrible Christmas cards and cheesy, animated evites to flood your mail/inboxes! Stuck on how to put a fresh spin on the classic mall portrait and ugly sweater combo this year, though? Well, look no further than these 10 celebrity inspirations, who have taken their Christmas calling cards to the next level through the use of scary knits, sex appeal and everything in between. Though, if you learn anything from the following examples, when in doubt, just put a cat in it. Peep a few of our favorites below.

What do you get when you combine the emoest elf with a character from The Jungle Book and a backdrop that looks straight outta Blues' Clues? The Wentz family Christmas photo, circa 2007, of course. Complete with Pete in candy-cane PJ pants, Ashlee sporting a terrifyingly toothless gape as dark as her husband's guyliner and a lil' Mowgli who just wants to get out of this damn box his parents wrapped him in, it's a wonderful, weird mess that has us wondering when Hot Topic will start carrying something more festive than Emily The Strange cards.


Purrrrfect American Beauty/suburban princess Mena Suvari has apparently settled into quite the domestic home life, complete with mustachioed husband, matching Nikes and one ambivalent cat to match her heirloom upholstery -- and we're not mad at the results. Granted, I think 90% of this is thanks to Ms. Blanca, who looks like the true, Fancy Feastin' winner of this whole ideal life scenario.

P.S. Is it just us or are there vague undertones of the ERMAHGERD present?


Sure, it may just be a sales gimmick, but using your sex appeal to sell (pretty fuggo) swimsuits via a Microsoft Paint Christmas card during the coldest season of the year is a pretty wily move. Besides, it's probably as close as you're going to get to Liz Hurley herself sending you.........Christmas kisses xxxx. The menagerie of white-furred animals--baby seals! llama! bunny rabbit!--is just a bonus.

The Jersey Shore goes '80s, baby, with this strangely QT Christmas card from none other than Snooki, JWoww and their squeezes. I mean, seriously, look at those Jheri curls and JWoww's dude's vest, which looks like something your matronly grade school teacher would wear when she was feeling a little festive. After all, we all know that hideous sweaters = true commitment.

Uh...I can't be the only one who thinks this is low-key pretty weird, right?

Merry Christmas ❤️❤️ THANK YOU NY for being one of the few states to @freethenipple pic.twitter.com/ouXhlBrXVW
— Miley Ray Cyrus (@MileyCyrus) December 14, 2013

Fuck yeah, what better time than Christmas to capitalize on feminist politics via a relatable Snapchat-inspired aesthetic?


Happy Holidays from all nine of us!! pic.twitter.com/SFFm1mnWhm
— Rebecca Romijn (@RebeccaARomijn) December 16, 2013

Apologies to my entire office for that loud SQUEAL I just emitted, because this fucking photo of the stupidly photogenic Rebecca Romijn, Jerry O'Connell and their entire adorable brood is just too much for me to handle -- and of course, they're all matching and furry and hugging and UGH MAKE IT STOP.

I think this photo speaks for itself.

Taking a cue from Mena Suvari, it looks like the middlest Jonas is also settling well into middle-age and a thinning hairline via his (sadly now-deleted) Instagram Christmas card featuring a very memeable cat and itchy '70s ski sweater. Me-OW.

Every Kardashian Krismas Kard Ever

Is this even a surprise? Everyone knows the Kardashians are the undisputed champs of the Christmas card game since they first started doing 'em in the 80s. And while I doubt you can also get David LaChapelle to shoot your next family portrait, you can definitely borrow a ladder and pose on it à la baby Kylie.