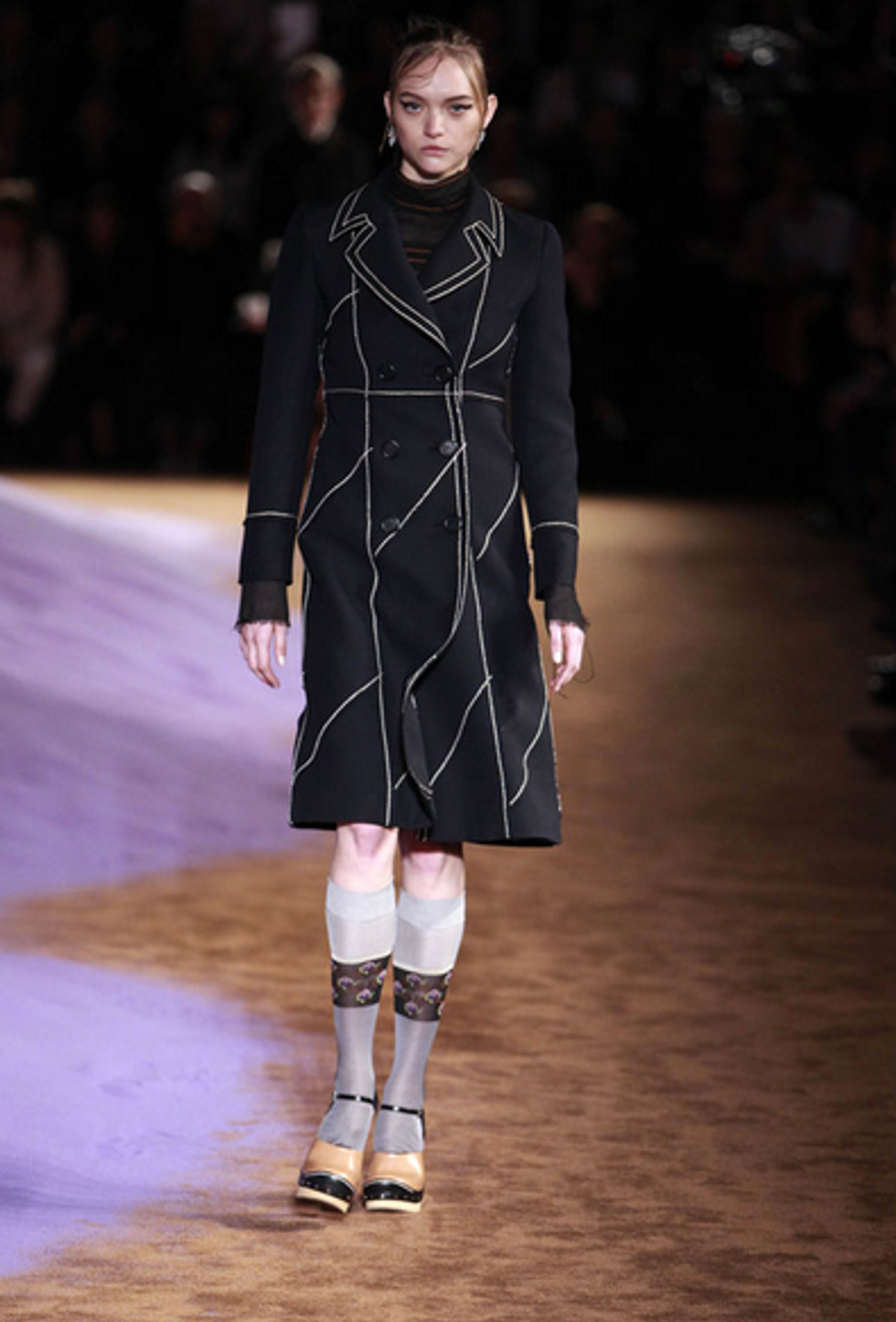 The Best Supermodel and Celeb Catwalk Cameos from Fashion Weeks Past

We at PAPER can't stop thinking about the blockbuster Marc Jacobs show Thursday night at the Ziegfeld Theater. The Ã¼ber-glamorous dÃ©filÃ© was chock full of sequins, feathers, and stars (both the shapes and the people). Our favorite part of the latter category was singer-songwriter Beth Ditto, who made an unexpected appearance on the catwalk in a floor length embellished gown. That got us thinking about other celebs and models who have made surprise appearances on the catwalk over the years -- here are a few of our favorites.

1. Madonna at Jean Paul Gaultier, Spring/Summer 1995
Madonna and JPG have had been friends ever since the French designer created the now-infamous cone bra for the pop star's 1990 Blonde Ambition world tour. It's no surprise, then, that Madonna hit the catwalk for the designer WEARING his Spring/Summer 1995 collection. The cameo was the talk of Paris Fashion Week, not only because it was Madonna, but also because she was pushing a petite dog down the runway in an ornate baby carriage!
2. Alexa Chung at Chanel, Spring/Summer 2014
This British it-girl is no stranger to fashion shows (especially Chanel!), but she usually sits in the front row instead of strutting down the runway. But, for the Spring/Summer 2014 Chanel show, Chung hit the runway in a grey-toned caplet dress and the sock-shoe hybrid that served as the staple of the collection.


3. Naomi Campbell at Givenchy Menswear, Spring/Summer 2016
The one and only Naomi Campbell hit the catwalk for her friend Riccardo Tisci's Givenchy Spring/Summer 2016 Menswear show. The supermodel came down the runway in an embellished blazer (and almost nothing else), exhibiting her signature, hip-centric walk. Campbell was also the face of the Fall/Winter 2011 Givenchy ads -- one of Tisci's most famous collections.
4. Gemma Ward at Prada, Spring/Summer 2015
Gemma Ward, the Australian model opened the Prada Spring/Summer 2015 show -- several years after quitting the business. Ward was a fan favorite before leaving the runways, so this unexpected comeback sent shockwaves through the fashion community. And only a luminary like Miuccia Prada could get a model like Ward to come out of retirement.

5. Kirsten Owen at Rick Owens, Fall/Winter 2014
For Rick Owens' Fall/Winter 2014 show, the designer wanted to cast women who had played an important role in his career over the years, so '90s supermodel Kirsten Owen was a natural pick to open the show.
6. Ben Stiller and Owen Wilson at Valentino, Spring/Summer 2015
At the end of the gorgeous Spring/Summer 2015 Valentino show the lights dimmed and out came Ben Stiller and Owen Wilson -- in character as Derek Zoolander and Hansel, and in full Valentino looks. The double celeb cameo was a teaser for the upcoming Zoolander sequel and made for a very Instagram-worthy moment.
7. Maggie Rizer at Michael Kors, Spring/Summer 2015
Maggie Rizer -- the American model who was a designer favorite in the '90s and immortalized in a set of arresting Yohji Yamamoto ads -- left the industry in 2004 to focus on her personal life. Although the 2015 Michael Kors show wasn't her first job since deciding to come back to modeling, it was a surprising moment that boosted the collection's stock.
8. Pat Cleveland at Moschino, Spring/Summer 2014
For Moschino's 30th anniversary collection, the label put on a joyous affair that paid homage to the genius of founder Franco Moschino. Pat Cleveland, the '70s supermodel who served as a muse to icons like Moschino, Yves Saint Laurent and Halston, opened the show. Since the cameo, Cleveland has starred in Tim Walker lensed Lanvin ads with her daughter Anna -- who is also a model.
9. Kristen McMenamy at Viktor & Rolf Fall/Winter 2010
Kristen McMenamy a supermodel whose work made her the face of Versace for years, made a catwalk cameo as the centerpiece of the Viktor & Rolf Fall/Winter 2010 show. McMenamy wore every piece of the collection -- all at once! -- and was slowly stripped down as V and R themselves dressed other models in the clothes as she removed them.
10. Kate Moss at Alexander McQueen, Fall/Winter 2006
After being shunned by the fashion community, Kate Moss was lucky to have the support of her dear friend Alexander McQueen. For his Fall/Winter 2006 show, McQueen created a massive prism that displayed a hologram of Moss floating in a tattered, beautiful gown. The gesture put Moss in the spotlight once again, helping to paper over her scandals.
11. Lady Gaga at Mugler, Fall/Winter 2011
For Nicola Formichetti's debut at Mugler, the stylist-turned-designer enlisted the help of his close friend Lady Gaga to not only provide the soundtrack to the show, but also strut her stuff on the runway. The pop star lit the runway ablaze, sporting two high pigtails, an asymmetric hat, a skin-tight outfit, and, of course, a lit cigarette.
12. Jean-Michel Basquiat at Comme des GarÃ§ons, Spring/Summer 1987
The famous NYC artist made a surprising appearance on the catwalk, in a moment when the avant-garde in both art and fashion collided.
13. Aimee Mullins at Alexander McQueen, Spring/Summer 1999
Alexander McQueen worked with a variety of inspiring women, so it's not surprising that his shows make this list twice. Paralympic athlete Aimee Mullens used two intricately carved wooden legs, specially made for her. In fact, McQueen got multiple requests for the "boots" that onlookers assumed she was wearing.
14. Kendall Jenner at Marc Jacobs, Fall/Winter 2014
Marc Jacobs launched Kendall's career as a model, in a bit of casting that became the talk of NYFW (and the internet), especially after Jenner walked the runway in a sheer blouse, which made the surprise casting even more shocking to the public. Although her appearance was a shock at the time, Jenner is now a runway staple for many famous designers.
15. Raquel Zimmerman at Givenchy, Spring/Summer 2016
To celebrate of the opening of the new Givenchy store on Madison Avenue, Tisci cast an all-star collection of models to hit his NYFW catwalk but the cherry on this fashion cake was closer Raquel Zimmermann -- a timeless beauty and a favorite of many a designer who, in recent years, hasn't been walking the catwalks as much.
From Your Site Articles
You May Also Like
Internet Culture