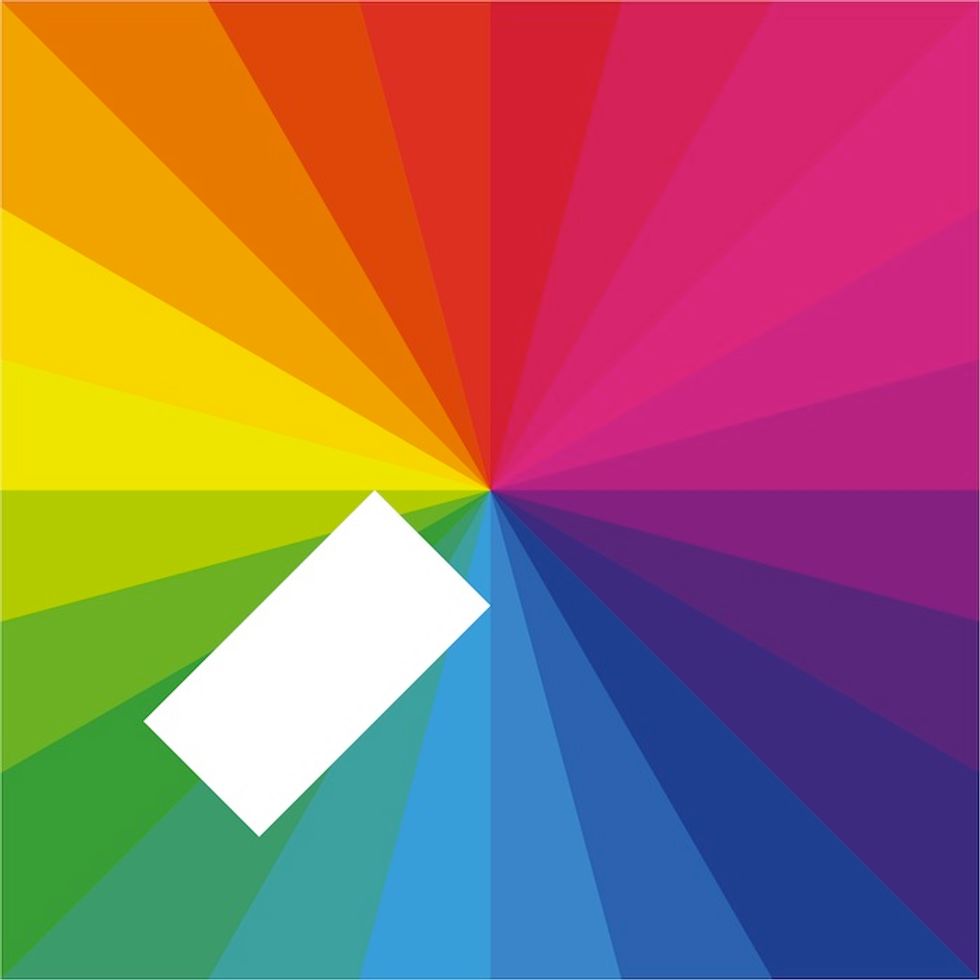 The Best Music In June

Jamie xx - In Colour
Last Friday, as the news about the Supreme Court's decision to effectively legalize gay marriage in all 50 states broke, I couldn't help but think about Jamie xx's In Colour, one of the finest records released this year. On one hand, this didn't make a ton of sense: In Colour isn't about the trials, tribulations and triumphs the queer community faces daily in any specific way; in all reality, my impulse to reach for it was probably a not-so subtle Pavlovian response to all the rainbows flooding my Twitter timeline, reminding me of In Colour's kaleidoscopic sleeve. But maybe there something more to this impulse. In Colour is, among many other things, a nostalgic love letter to rave and dance culture, spelled out in various styles that were in no small way fostered and popularized by gays. Also popping up in my timeline was the Young Thug and Popcaan-assisted single"I Know There's Gonna Be (Good Times)," an obvious highlight from the album and a surprise frontrunner for Song of Summer 2015. As Youtube links to the track commingled with images of people celebrating on the Court steps, the joy felt all the more contagious.

In Colour is also a bittersweet affair, exploring feelings of loneliness when everyone around you seems to be having the time of their lives. "Loud Places" (featuring a wonderful vocal take from Jamie's xx bandmate Romy Madley Croft) and "Stranger in a Room" (featuring a wonderful vocal take from his other xx bandmate, Oliver Sim) detail what it's like to pretend to be something you're not as the party rages on. This summer, Jamie xx will be playing a lot of parties, both large and small. And while the anxieties of fitting in and the nagging reminder in the back of your head that the party will eventually have to come to an end, In Colour provides a time and space where we can all rave together, under one roof.

Miguel - Wildheart
Miguel likes to bone. Over the course of now three LPs, the California R&B savior has never made any, well, bones about that fact. But unlike a lot of his peers, his equal opportunity horndogging has allowed him to transcend the modern hang-ups his genre often falls prey to. After all, it takes two to tango (or three or four, depending on what we're talking about here), and quite often, that dance requires a carefully orchestrated soundtrack; Miguel's real ace-in-the-hole was knowing that piece of the puzzle was always the most important. And as far as the music is concerned, Wildheart might be Miguel's finest moment to date, not overly concerned with generating singles (though it could boast at least three or four by my count), but more keenly aware of the power a lean but fulfilling 45 minute capital-A album can harness. From the slow burn of "NWA" to the foggy jubilation of "Waves" (more on that later), Miguel has crafted psychedelic sex seance worthy of the influencers that inspired it, from Prince to Arthur Lee to D'Angelo. Inventive and charismatic and humid as all hell, Wildheart is like stepping into a sauna full of very pretty, very stoned people where they ladle GHB and rosewater onto the rocks instead of water.

DJ Koze - DJ-Kicks
For the 50th installment of their influential DJ-Kicks compilation series -- which has hosted guest mixers ranging from Carl Craig to Annie to Actress since the mid-90s -- Berlin-based electronic label !K7 Studio was wise to choose Hamburg's DJ Koze to helm such a prestigious anniversary entry. Koze's oddball tastes have always been proudly on displayed on his solo recordings, so it's a real treat to have this document of his influences and personal favorites wrapped up in such an economical, irreverent and satisfying package. With laid-back beatmakers like Madlib rubbing elbows with the likes of experimental electronic pop band Broadcast, Koze makes seemingly strange bedfellows get it on like eager teenagers in the back of a Jeep. Case in point: Dropping William Shatner into the middle of the mix and actually making it work.

Kacey Musgraves - Pageant Material
As the battle over "authenticity" rages on in the country music world, take solace in the fact that a bonafide crossover star like Kacey Musgraves can make a record as thematically and sonically honest as Pageant Material without alienating purists or progressives. Instead, she's actually managed to not only unite these two disparate factions, but invite some newcomers into the fold as well (i.e. non-country fans). The answer to Pageant Material's success is pretty simple: Write charming songs about familiar things (families can be crazy, dudes can be jerk-offs, people can be judge-y) and present them with plenty of humor and a little bit of grace. Musgraves isn't breaking any new ground here, but her self-effacing nature's lack of disingenuity ("I'm always higher than my hair" she shrugs on the title track) is a testament to her relatable character. On "Dime Store Cowgirl," she actually sings the words "you can take the girl out of the country, but you can't take the country out of the girl" and somehow makes it not seem trite. And makes it look easy in doing so.


Desaparecidos - Payola
Are you coming into a record titled Payola by a band fronted by Conor Oberst worried that the subject matter might get a little, shall we say, heavy-handed? Well, there's the door. It's been 13 years since the Bright Eyes frontman's old punk band Desaparecidos put out a record (their debut Read Music / Speak Spanish), and needless to say, a lot has happened in the world for Oberst to get pissed off about. He's got a lot of problems with you people, and Payola is his grand grievance airing. If titles like "Slactivist" and "The Left is Right" weren't indication enough, Payola often reads like a college freshman who just discovered Chomsky. But Oberst's heart is almost always in right place, and on tracks like "Golden Parachutes," humor is his sharpest dagger. And the songs totally rip.

Beach House - "Sparks"
Beach House often take a lot of flak for producing records that often sound too similar. What naysayers often fail to recognize is what Victoria Legrand and Alex Scally are able to accomplish within the limits they have set for themselves over the course of four terrific albums -- and that's where their real power lies. In subtly but meticulously tweaking and refining their singular sound within those parameters is what makes Beach House such an uncommonly dexterous act. So it's with "Sparks," the first single from their new album Depression Cherry, that lovers and haters of the duo might be able to reach something of a common ground. While the requisite dream-pop signifiers are still very present, with Legrand's voice drifting over beds of embryonic melodies, a wary organ line and a distorted, strangulated guitar offset the warmth in ways that feel bold, if not familiarly nuanced. It sounds as if Legrand and Scally have spent a good deal of time since 2012's Bloom listening to My Bloody Valentine, and if so, one can hope that Depression Cherry will make good on "Sparks"'s sure-footing into further uncharted territory.

Fetty Wap - "679" [ft. Remy Boyz]
There's no question that Fetty Wap is having an awesome summer. Peaking at number two on the Hot 100 and racking up nearly 140 million Youtube views, the Jersey rapper's "Trap Queen" is a certifiable juggernaut (he closed the BET Awards with it last week). It might be too early to tell, but it would seem that Fetty could have a pretty substantial career beyond his big hit (dread controversy notwithstanding). Consider "679," which sounds like one of many victory laps to come. Funny thing is, "679" was posted to Soundcloud over a year ago, and only now is finally getting some burn thanks to a (kind of perfectly goofy) new video. Whether it's new to you or not, it still sounds like the welcome extension of an already rich coronation.

Future - "News or Somthin"
It's been good to be a Future fan of late, seeing as the ATLien has dropped not one but three new mixtapes in the past couple of months. Though casual admirers (myself included) may have found it a bit trying to weed through all the new material, the ever-gracious Plutonian has made things a little easier by dropping this great new single. It's sometimes easy to forget what a strong rapper Future can be, and "News or Somthin" rectifies that in the most crucial and invigorating of ways.

The Weeknd - "Can't Feel My Face"
For all intents and purposes, the world really didn't need a song titled "Can't Feel My Face" from the Weeknd. Aside from the improbably decent radio hit "Earned It" (from the Fifty Shades of Grey soundtrack, of course), Abel Tesfaye's musical career has been one of diminishing returns ever since his breakthrough mixtape House of Balloons in 2011. Prescribed to the same louche drugginess and egotistical self-loathing, Tesfaye's disinterest in working outside the largely unsympathetic caricature he had drawn for himself felt doomed to endure. But "Can't Feel My Face" is a step in a very promising direction. Lyrically, it's the same lazy coke metaphor, but it's hard to give a fuck when the track itself -- produced by evil pop genius Max Martin -- hits almost every conceivable disco-tied sweet spot. Try to ignore the rumor that this one could've been Justin's and just hope that Tesfaye's new direction is a permanent one.

Miguel - "Waves"
I try my best not to double-up on these round-ups, but when a song as totally undeniable as "Waves" comes along, it would feel wrong to waste space on anything else. If you show up to a Fourth of July party this weekend and people are hanging ten on this shit, leave.