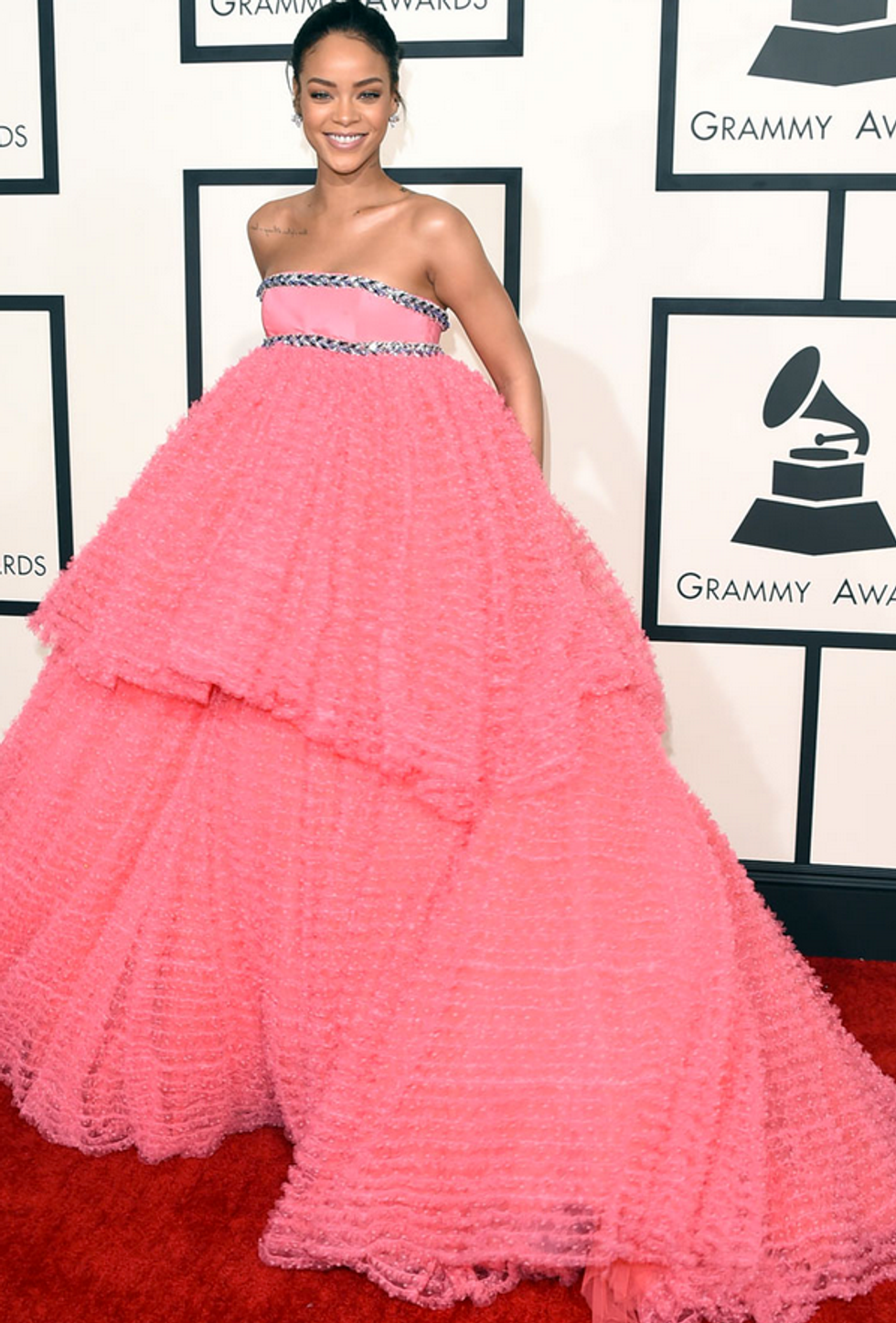 The Best and Worst Celebrity Fashion at the Grammys

The Grammys have always been one of our favorite awards shows when it comes to fashion because musicians seem to have way fewer hang-ups about letting their freak flag fly than actors and actresses do. Last night had its share of freaky -- and #flawless -- and we've rounded up 20 of the best and worst, below. 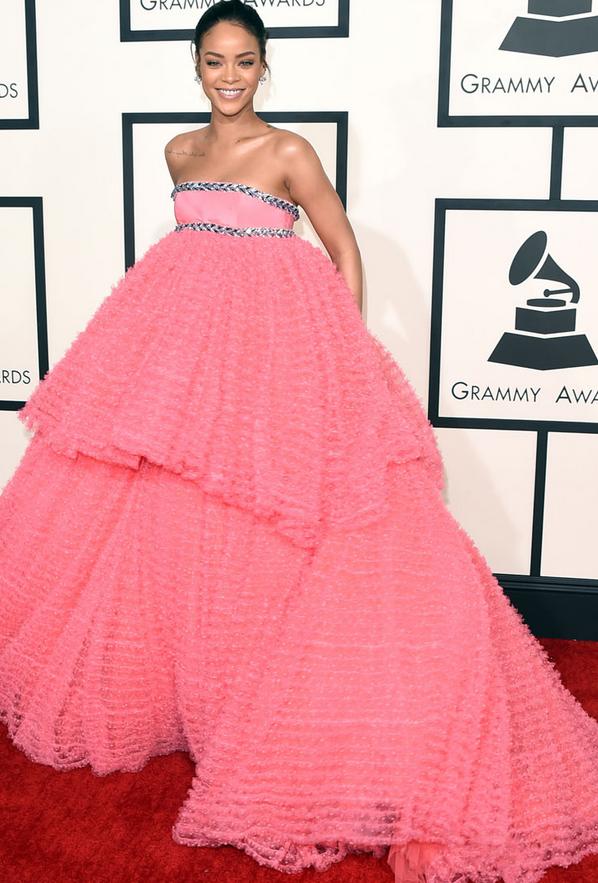 "On just about anyone else this Giambattista Valli gown would look mental but it just works on Rihanna. She looks like the most perfect piece of strawberry cotton candy. And a '50s Barbie doll." -- Abby

"I loved this on her so much. I kept seeing memes of people dropping her into sweet sixteen party photos like it's the biggest burn and it's like, "yeah, and?" Also, this dress is the opposite of a prom dress. If you want to see that, just look up all of Taylor Swift's red carpet dresses pre the 2014 VMAs." --Elizabeth 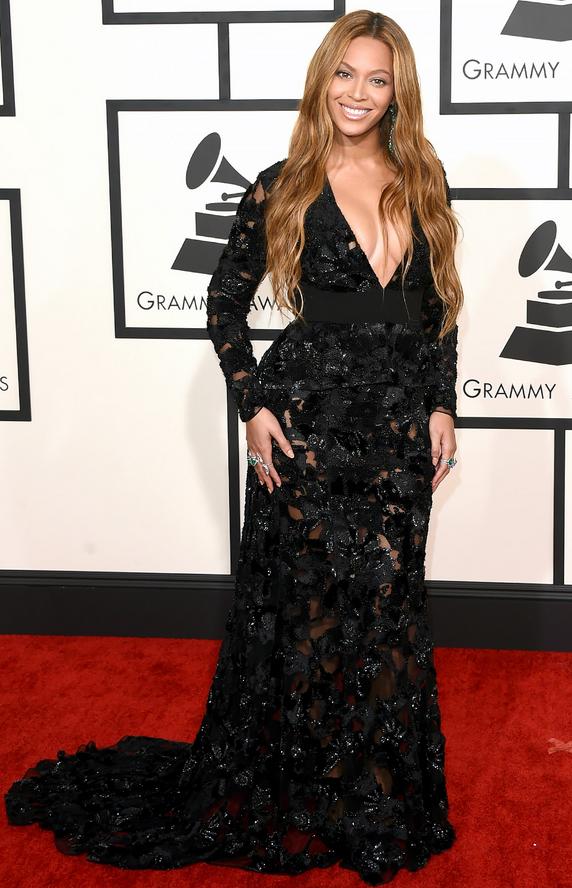 "Queen B. looked great although her Proenza Schouler gown is a little repetitious. I feel like we always see her in a low-cut, sparkly lace number. That said, this one was particularly 'haute Elvira' and I liked it." -- Abby

"Beyonce looks especially Bey-bot in this photo, which makes me love it even more. Until she's powered down and put away on a dolly in Illumanti headquarters (AKA a vault under the Statue of Liberty), her program just makes her do HER. And that means wearing looks that she loves, even if they're boring. She doesn't need to wear crazy red carpet numbers to get us to look at her." -Elizabeth 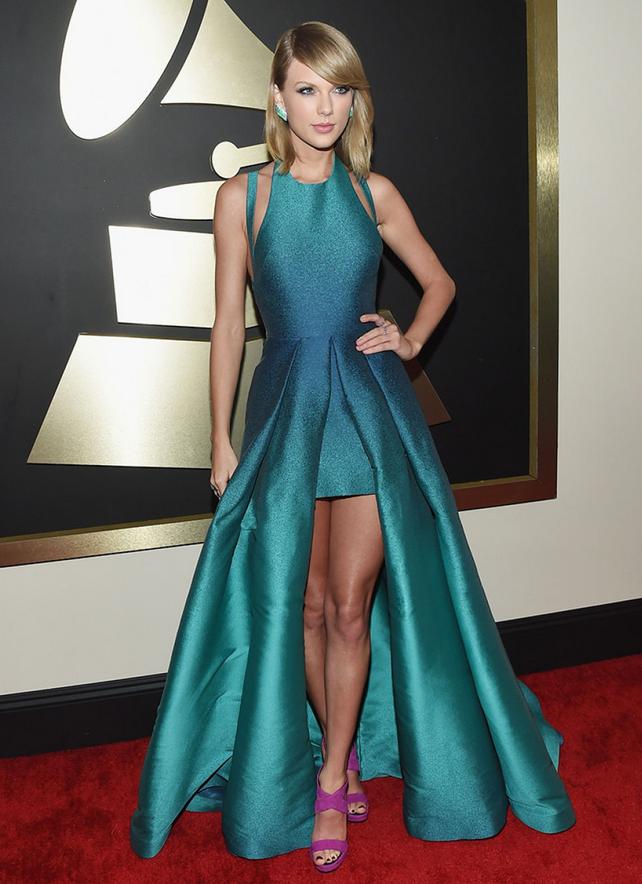 "I've never been a fan of a mullet dress though the teal color of Taylor's Elie Saab gown is pretty gorgeous. I don't think it needed those extra straps though. They make me think she's wearing a matching teal backpack." -- Abby

" I hear you on the straps, but they actually don't bother me. She looks like a futuristic high-fashion mermaid, which should be a look that everyone goes for, always. --Elizabeth 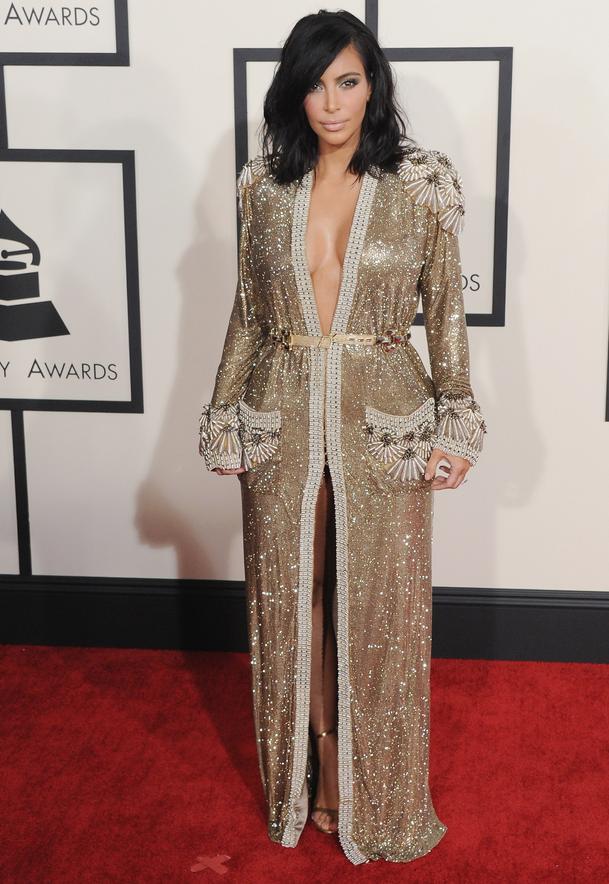 "KKW's Gaultier gown was kind of amazing. It was so over-the-top and kind of looked like a fancy bathrobe and the sleeves were too big but, hey, it's the Grammys where 50% of people look like they're wearing Halloween costumes so it works." -- Abby

"I loved this too. I liked that it looked like an bejeweled bath robe and it was probably heavy as shit. Respect."-- Elizabeth 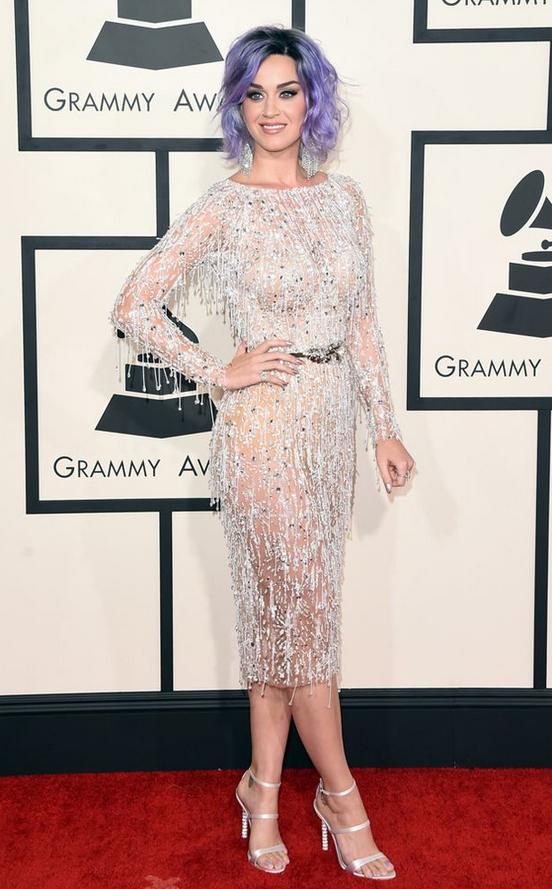 "Pretty demure for Katy P., huh? The Zuhair Murad dress is very pretty and I like that she made the look more interesting with her purple bobbed hair." -- Abby

"I thought this was pretty, though I think Katy should just start dressing like food again. People would flip out if she came dressed as a turkey leg or a piece of salmon. It's time to just GO THERE, Katy."-- Elizabeth 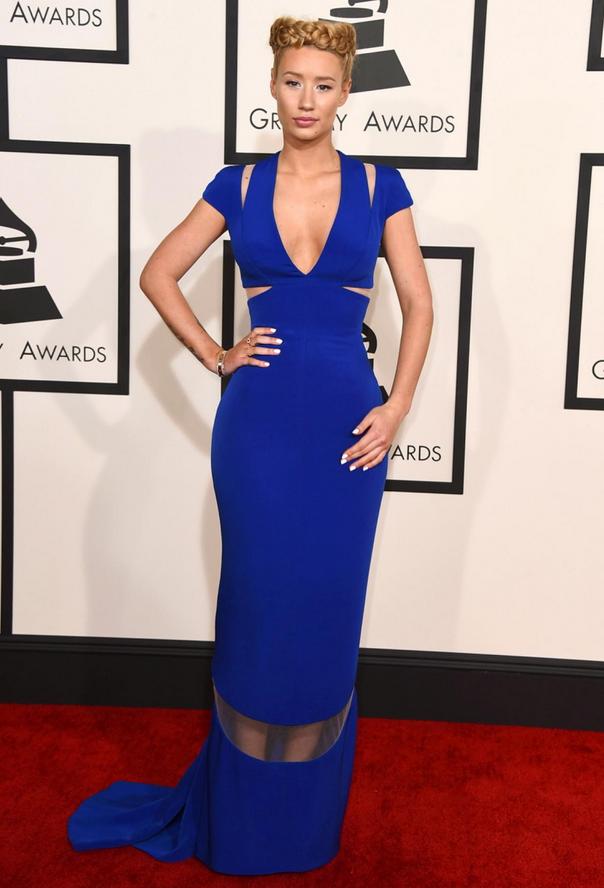 "What the what is going on with her hair? I generally LOVE braid crowns but this. is. too. much. I think because it's pretty tight and so far in front of her forehead, it just looks…weird. Birds' nests jokes aside, I also just don't think it fit the vibe of her Armani Privé dress. The dress is so simple and athletic-looking and the hair seems like it'd be better for some kind of ethereal, fairy-goddess look. Oh well. Too bad. So sad." -- Abby

"Her braid made her look like she had a square Frankenstein head, and while I'm all for celebrities looking more like monsters on the red carpet, I just couldn't get with this. The color of the dress is perfect on her but that's about it." --Elizabeth 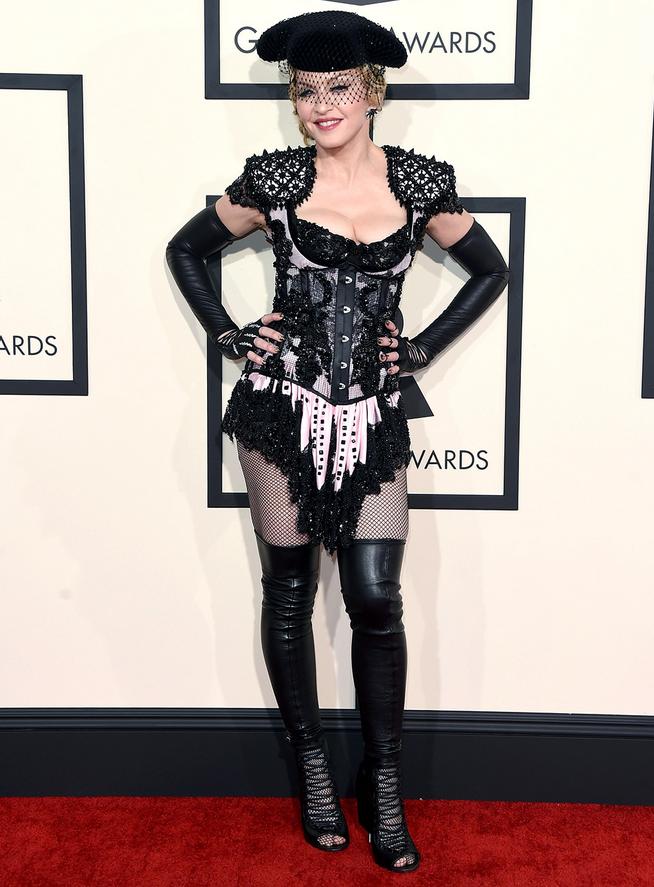 "This is exactly what you should be wearing to the Grammys." -- Abby

"Agreed. When in doubt, look like a Matador/French-Maid-hooker and have sex with minotaurs in a satanic-ritual-hellscape performance broadcast 'round the world. Madonna lives the pop star dream. As a woman in entertainment, she has achieved the impossible -- demand that we acknowledge her existence past the age of 40. Nobody talk to her. Madonna can do whatever she wants." --Elizabeth 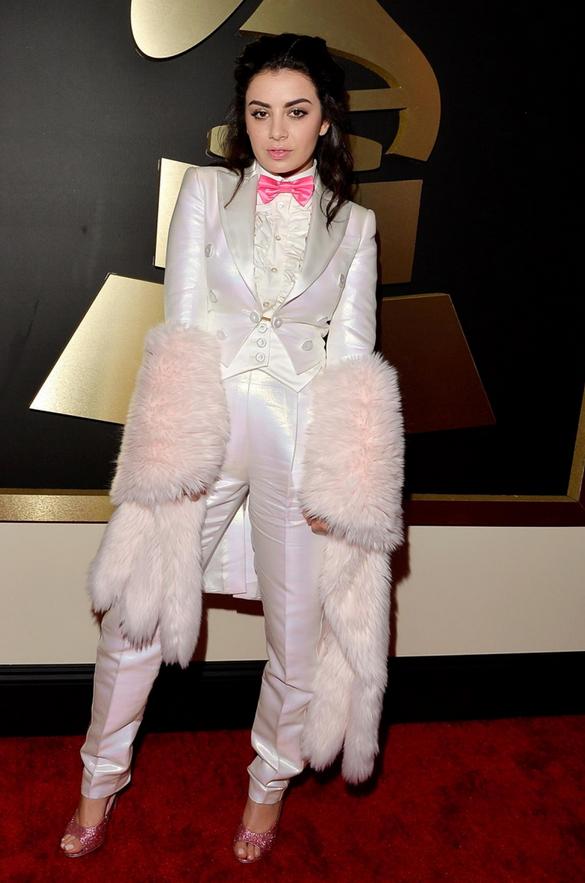 "As our colleague Gabby pointed out, Charli's Jeremy Scott for Moschino tux looks like a bad costume out of Party Down, which is 100% accurate. I don't get the point of that furry wrap though. You can't tell me it was actually cold outside in LA. LA doesn't know cold FOR SHIT. " -- Abby

"It's very David Lee Roth in the "Just a Gigolo" video, which makes me love it, but this is a Kids' Choice Awards look AT BEST, and I think that Charli knows that. Even Red-Carpet-Troll-Hall-of-Famer Kesha knows that.--Elizabeth 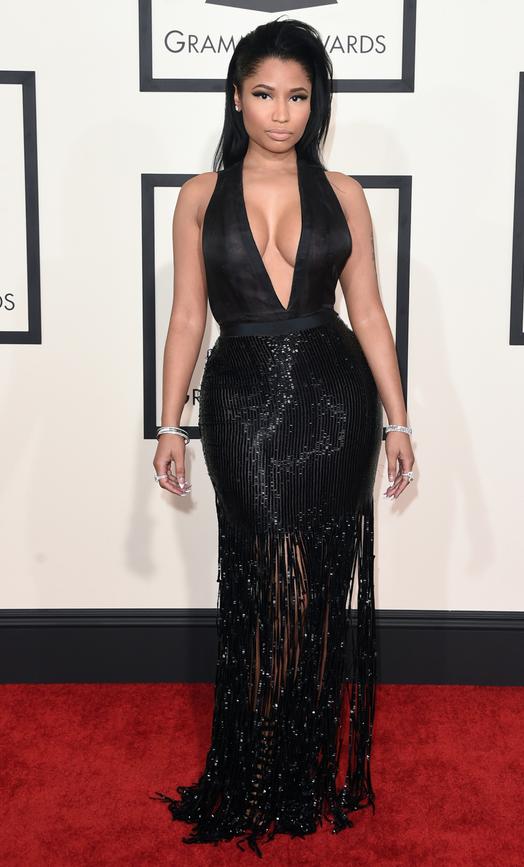 "I continue to love seeing this softer, elegant side of Nicki and this Tom Ford dress is very sexbomb-meets-Queen Bitch In Charge. Imagine if she had worn THIS in her 'Anacona' video while she was chopping up phallic-looking vegetables." -- Abby

"Agreed. If you were so much as to speak to Nicki Minaj, she would slap you hard across the face. And you'd be the better for it."-- Elizabeth 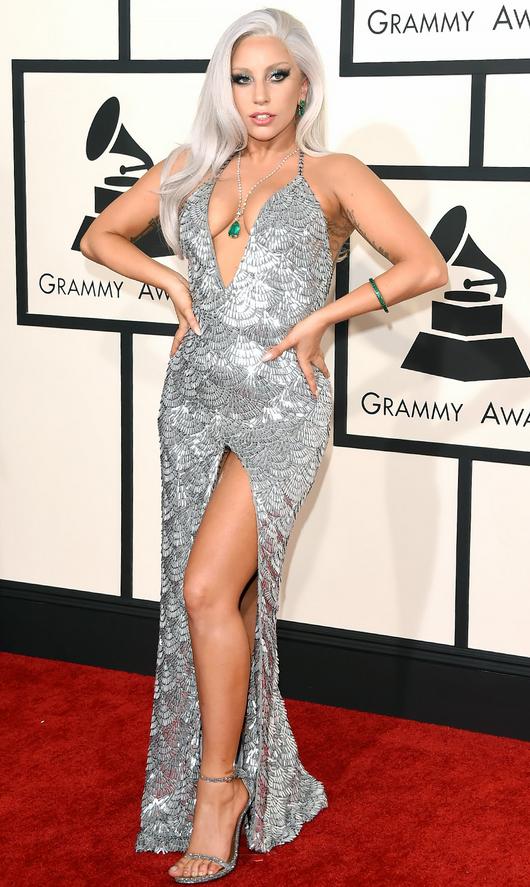 "The color and the seashell/fan-like beading on Lady Gaga's Brandon Maxwell dress are pretty but the thigh-slit, deep cleavage and her gray hair (wig?) make her look like a septuagenarian widow who just moved down to Miami to 'get a new lease on life' and 'awaken her sexuality' (translation: prey on 40-year-old men). Not that that's such a bad thing." -- Abby

"Agreed. She's too young to be going full Donatella on us right now. I think the beading is so insanely beautiful, I just wish maybe the slit hadn't been there? It was just too too."-- Elizabeth 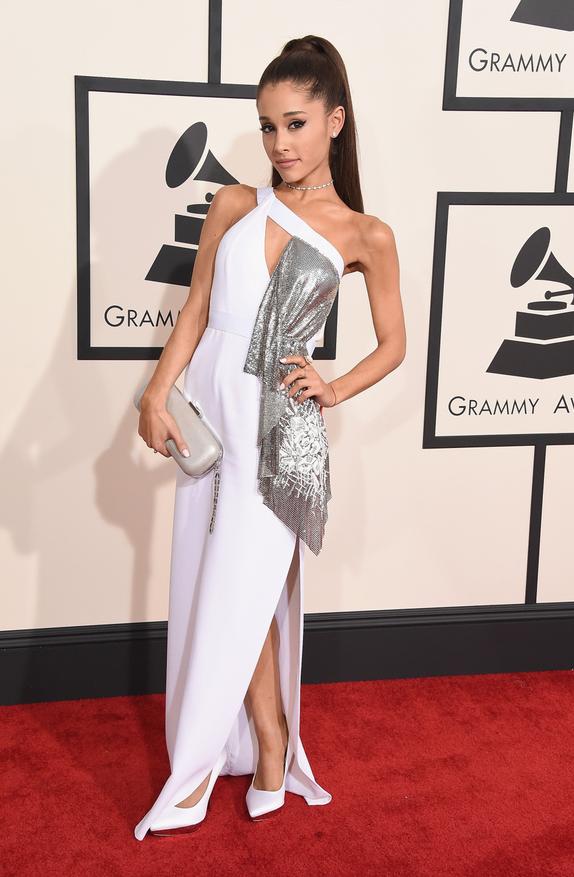 "This dress is a big "STOP THIS, AT ONCE." This makes no sense, and not even in a fun way. (See Rihanna.) It looks like her boob is ensconced in one weeping kerchief. I'm also very tired of stacked high heels, but I feel I am alone in that sentiment and will take it up at another time." -- Elizabeth 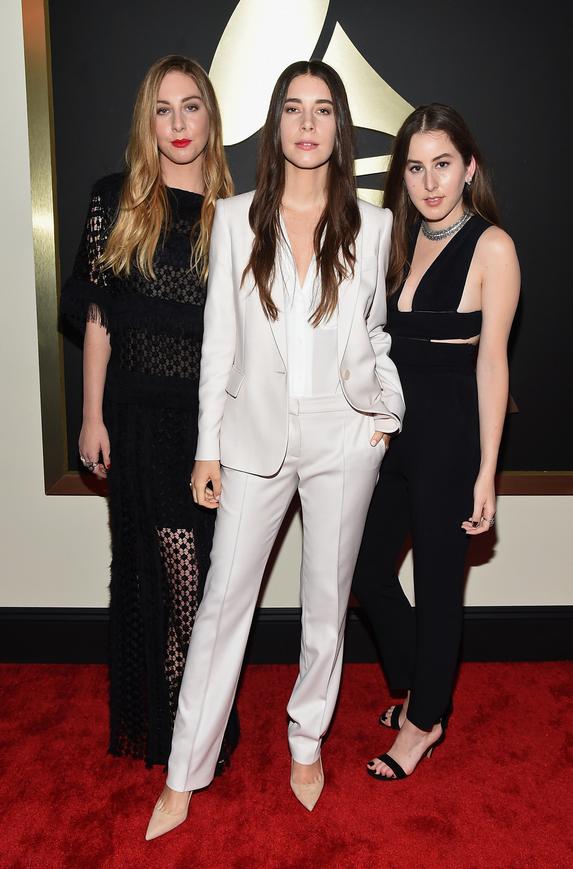 "Este's Chloé dress is very pretty but a little forgettable, caught in the sea of sheer, lacy black dresses but I'm obsessed with Danielle and Alana's Stella McCartney pantsuit and jumpsuit." -- Abby

"I think the Haims all look great. You know how Lita Ford gives that IDGAF-sniff at the beginning of "Kiss Me Deadly?" This photo is that sniff." -- Elizabeth 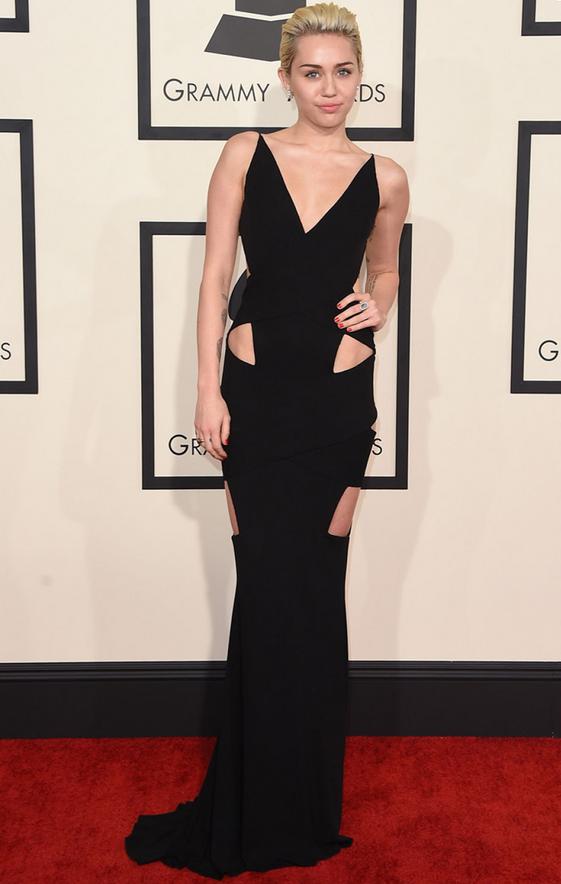 "So fresh-faced! She looks great but the hip-bone and mid-thigh cut-outs are kind of freaking me out. Love that she went with such minimal makeup." -- Abby

"Agreed. I am on board for everything happening above her neck line, and that's it." -- Elizabeth 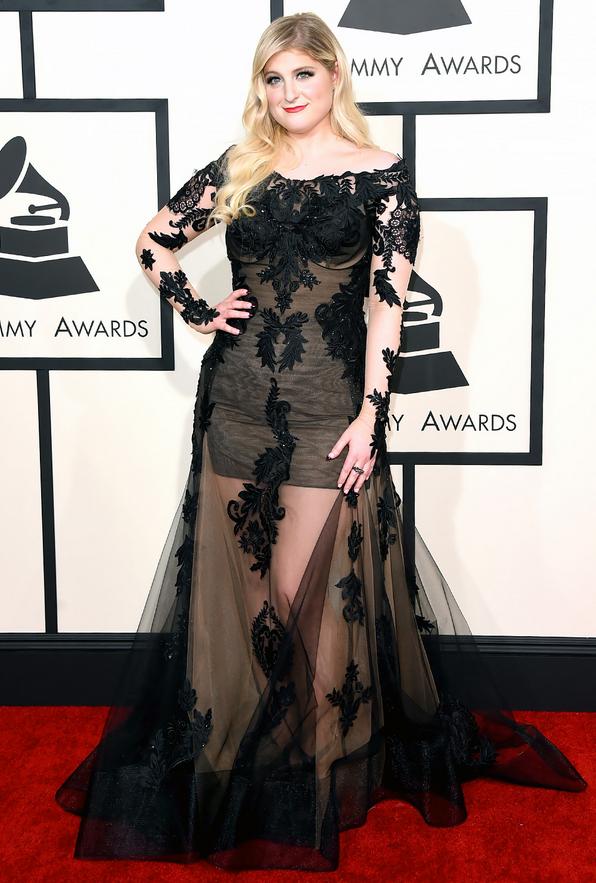 "Another sparkly, lacy sheer dress. I think Meaghan's hair and makeup look great but I wish either the whole dress was sheer or that the under layer went all the way down to the floor. Right now it just looks like she's wearing a bandage dress underneath, ready at any moment to ditch the gown and hit, like, Bootsy Bellows or something." -- Abby

"I think this is a case of a dress trying to look like 10 dresses at once, which is an observation that means nothing. I also wish my hair could look like that all of the time." -- Elizabeth 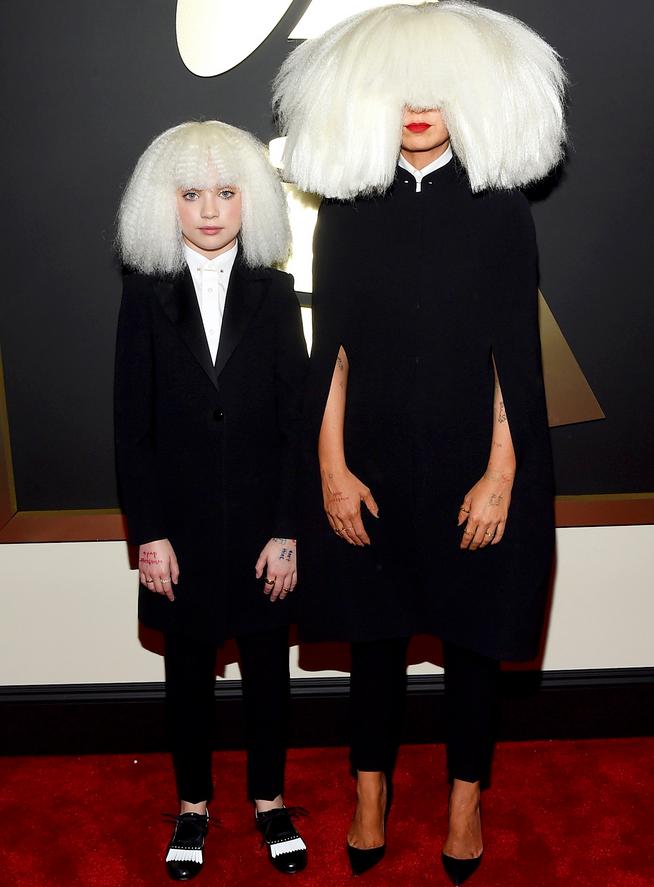 Previous Next
Sia and Maddie Ziegler

"More red carpets should feature capes and giant wigs. Sia knows this. Do you even wig, Katy Perry?" -- Elizabeth 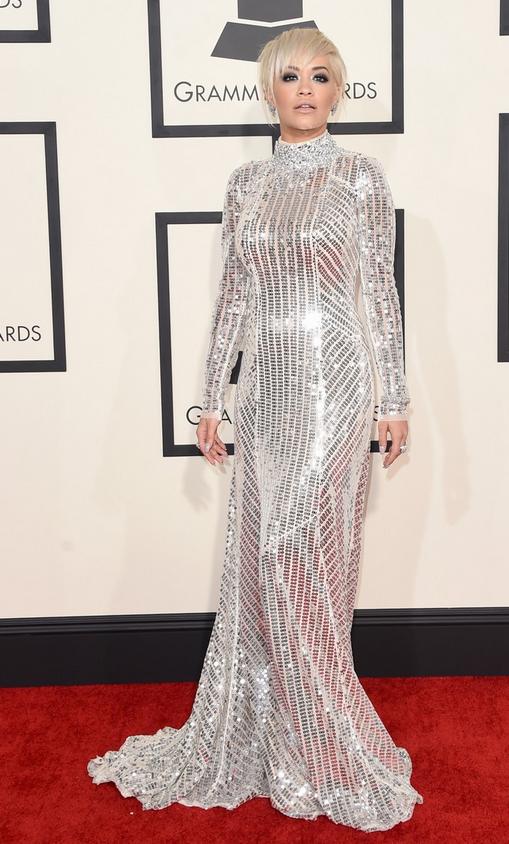 "I would describe this look as 'funny.'" -- Elizabeth 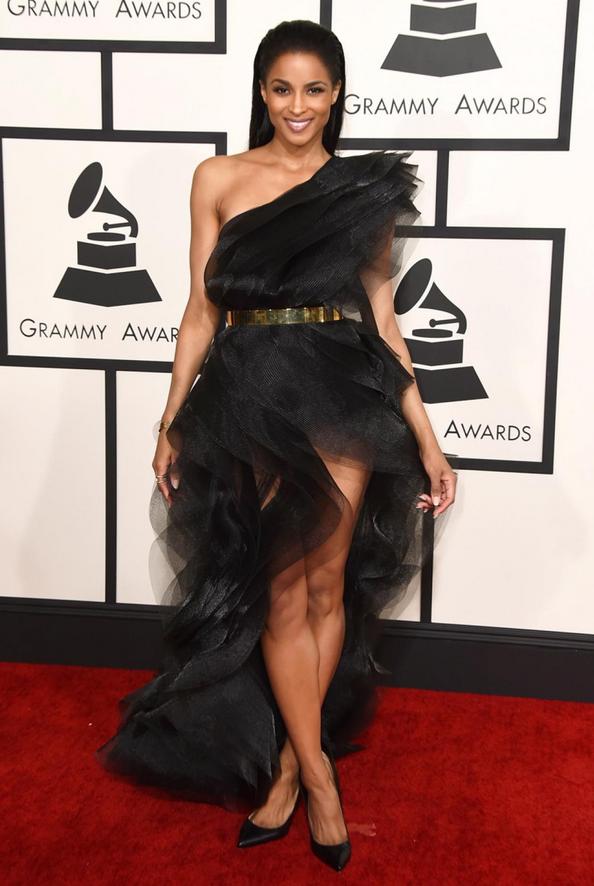 "I kind of love the way her dress looks like a paint stroke. That said, I don't know if I would wear a paint stroke to an awards show." -- Abby

"I loved this. It looks like a smoke monster enveloping her. More people's gowns should remind us of the genius, but ultimately alienating, ABC hit drama, "Lost.""-- Elizabeth 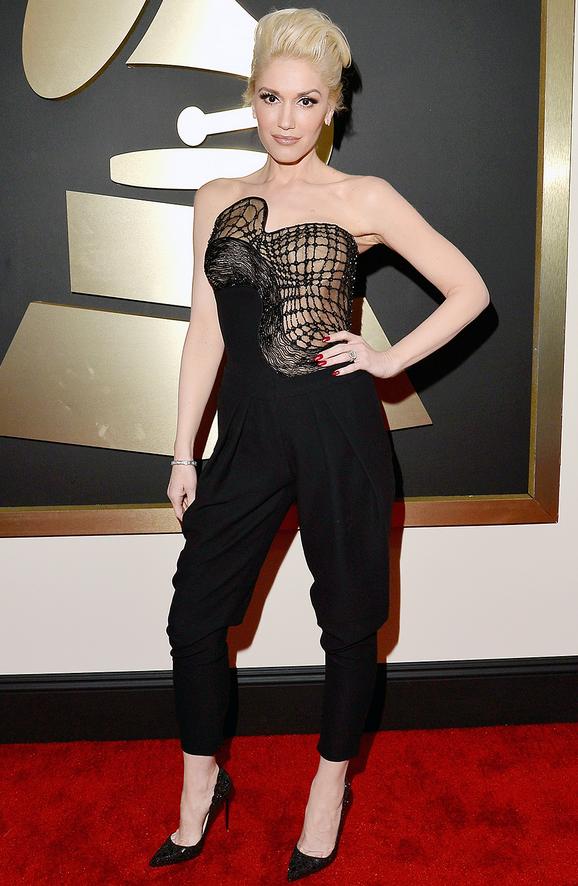 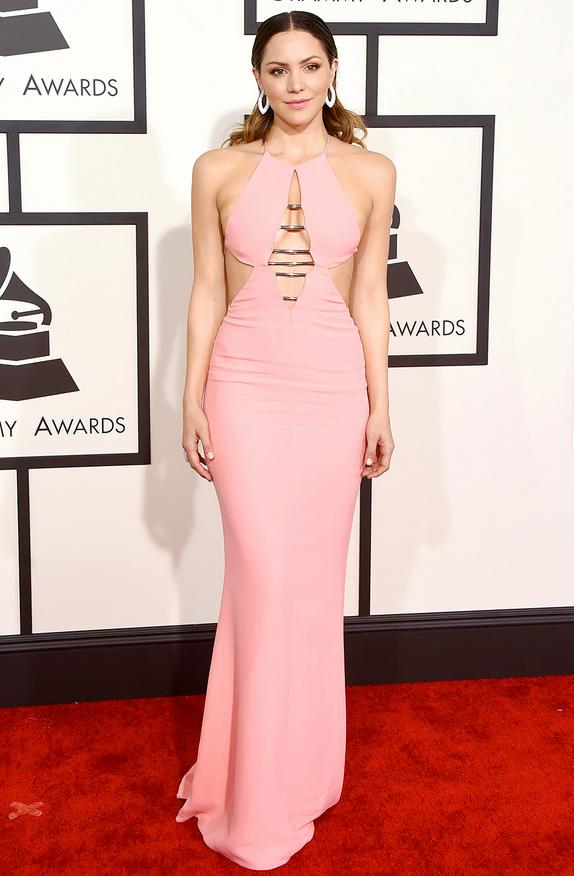 "Yikes, sorry Katharine. I'm sure you're a really nice person but this was hands-down my least favorite look of the night. From the metal bars to the odd cut-outs to the huge earrings and wet hair that looked totally unfinished, it was just a big case of 'too much.' Her makeup looks good though." -- Abby

"I think the carpet looks nice in this photo." --Elizabeth 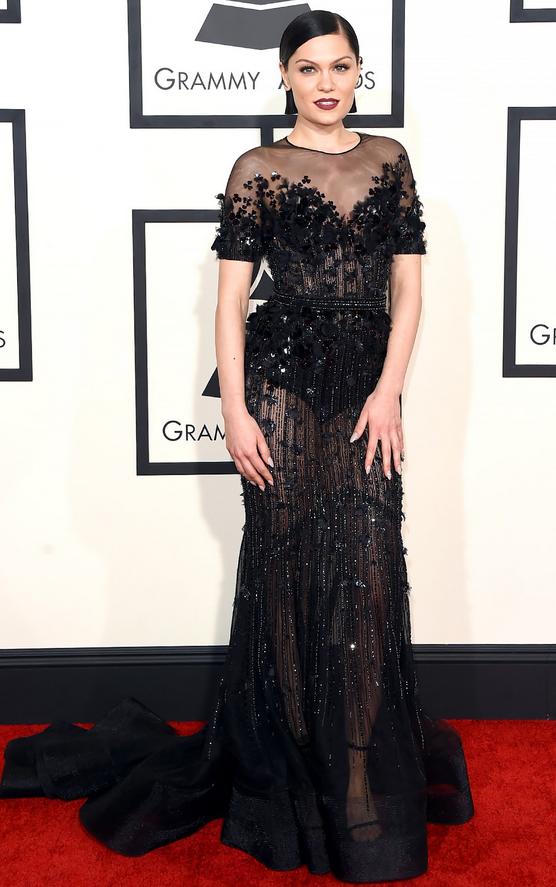 "Jessie J should not be marketed to Americans anymore because it makes everyone feel confused and anxious and like we're missing something. Regardless, I think this is a beautiful dress and she looks great. Team deep side part." --Elizabeth
You May Also Like
Famous People