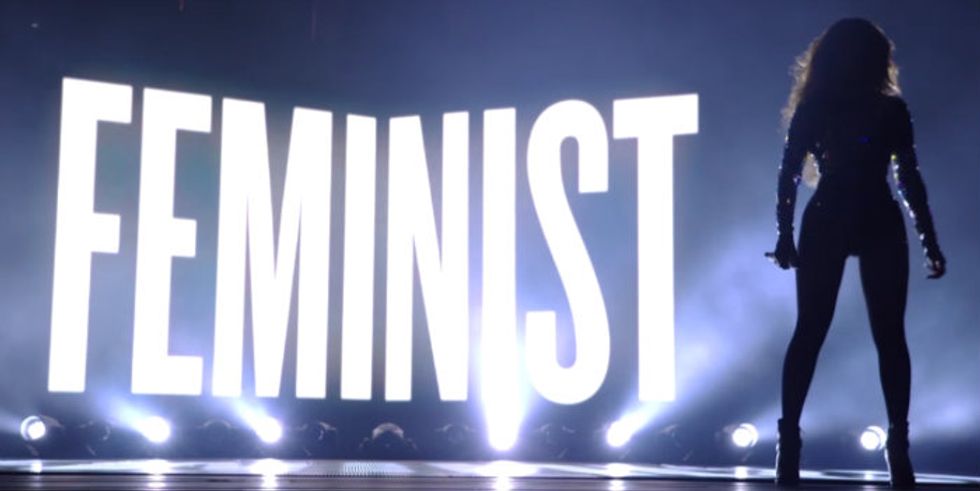 The 15 Most Influential Moments of the VMAs

by Michael Tedder and Eric Thurm
PAPERMAG
(all photos via MTV)
The VMAs are an odd awards ceremony. In contrast to, say, songs, movies, TV shows, books, Broadway plays, etc., people aren't quite as invested in music videos as an art form. (Have you ever watched a music video and thought, "Wow, that was totally VMA bait"?) But that doesn't mean they're not a cultural institution like similar entertainment industry pageants. In fact, by stripping the objective "recognition" of "artistry" from the VMAs, they've been freed to become a bizarre yearly ritual of delightful pop insanity, an event that has spawned more than its fair share of iconic and influential moments -- many of which you might have forgotten even happened there. Today, we run through the history of the VMAs to remember the sheer breadth of things that have happened there, and remind you: Yes, that happened at the VMAs.

Madonna's White Wedding (1984)
The MTV Video Music Awards started in 1984, and appropriately enough, the entire evening was stolen by Madonna, arguably the greatest music video artist of all time. Wearing a combination wedding dress/bustier and a "boy toy" belt buckle, she writhed around onstage while performing "Like a Virgin," the single that cemented her status as an icon. During an era when MTV was still shiny and new, the inaugural awards show was truly a can't miss event, and Madonna seized the moment to demand our complete attention. She hasn't relinquished it since. -- Michael Tedder

Bon Jovi Inspires MTV Unplugged (1989)
Taking a slightly different sonic tack than you would expect from Bon Jovi, this acoustic performance is largely credited with inspiring the MTV Unplugged series -- which, you know, went on to be kind of a big deal. -- Eric Thurm

Michael Stipe Schools Everyone (1991)
Things Were Different In The '90s, Part One.  The late '80s and early '90s saw a number of artists raised on countercultural ideas publicly wrestling with how to square their beliefs with superstardom. In 1991, R.E.M.'s video for "Losing My Religion" broke the Athens alternative-rock pioneers into the mainstream, and frontman Michael Stipe used the occasion to expose the MTV audience to some ideas that were important to him. (This was a moment when being politically aware was de rigueur for hip rock bands.) R.E.M. and director Tarsem Singh pretty much ran the table that night, and every time Stipe collected an award he wore a brightly colored t-shirt that sported a socially-aware slogan, including "Wear A Condom," "Handgun Control" and "Love Knows No Color," which was emblazoned on a pink shirt accessorized with a red AIDS awareness ribbon. Preachy? Maybe a little, but it was still a brave move by a mainstream figure in 1991, during an era when people were both deeply afraid of yet deeply ill-informed about AIDS, and mainstream acceptance of homosexuality was far in the future. It's very unlikely that anyone at this year's ceremony will follow Stipe's lead and have the courage to use their moment to call for gun safety, but we can always hope. -- MT

Krist Novoselic's Bass Face (1992)
Things Were Different In The '90s, Part Two.  A year after R.E.M's coronation, Nirvana crashed the mainstream in much less time, but Kurt Cobain was determined to prove he would only play by his own rules.  He refused to perform "Smells Like Teen Spirit," much to the consternation of the event's organizers, and pushed instead for a new composition titled "Rape Me." They settled on a powerhouse run through of "Lithium," though the band goaded MTV executives with a few introductory bars of "Rape Me." Towards the end of the performance bassist Krist Novoselic, frustrated by equipment problems, threw his bass into the air. He misjudged the return, however, and ended up with a bass in the face for his efforts. As he stumbled off the stage in a daze, drummer Dave Grohl stepped up to the microphone and began taunting Axl Rose ("Hi Axl! Where's Axl?"), as retaliation for the Guns N' Roses vocalist boorish backstage behavior earlier in the evening. -- MT

Fiona Apple Calls Out the World (1997)
Things Were Different In The '90s, Part Three.  Fiona Apple won the Moonman for Best New Artist, largely on the success of her breakthrough video for "Criminal." Perhaps conflicted that she had to make a video in her underwear to people to pay attention to her and wary of mainstream success, she gave one of the most inflammatory speeches in the history of award shows. It started with a shout out to Maya Angelou and the opening salvo "This world is bullshit," and from there she proceeded to tear into the star machine. The speech incurred an immediate backlash (Et tu, Janeane Garofalo?) with many quick to accuse Apple of being a hypocrite, but it's not like she was wrong about a single thing. Go with yourself always, Fiona. -- MT

The Beastie Boys Decry Rape Culture (1999)
Things Were Different In The '90s, Part Four. In 1999, MTV rewarded the Beastie Boys for a decade plus of iconic clips with the Video Vanguard Award (basically the MTV equivalent of a lifetime achievement). But the Beastie Boys had bigger things on their mind. In the wake of the sexual assaults of Woodstock 1999, Adam "Ad-Rock" Horovitz took the opportunity to denounce the sexism of the music industry and called for musicians and concert promoters to work harder to ensure "the safety of all the girls and the women who come to our shows." The audience, which included such notable feminists at Metallica, Kid Rock and Fred Durst, was not at all pleased to be put on blast. Horovitz's wife, iconic riot grrrl Kathleen Hanna, later said "we left 5 minutes after this because it was so far beyond the 'who farted?' feeling, it felt like people were gonna kill us." -- MT

Macy Gray's Hard Sell (2001)
In 2001, presenter Macy Gray really, really, really wanted people to know that her new album The Id was coming out soon. At that point, she was two years away from her hit "I Try," and was eager to prove to the world she was no one-hit wonder. Not afraid to be obvious, she wrote a blue, metallic-looking dress that night that read "My New Album Drops Sept. 18, 2001." Just so no one missed the point, the back of her dress urged viewers: "Buy It." The tactic didn't do all that much for her sales, but hey, we'll always have "My Nutmeg Phantasy." -- MT

Eminem Gets Mad at a Puppet (2002)
If you're looking for the moment when people started to turn on Eminem, that time he lost his shit at the 2002 VMAs because Triumph the Insult Comic Dog poked fun at him is a pretty solid tipping point for when the rapper's tough guy shtick finally got old for all but the diehards. But, perhaps worrying that he wasn't appearing humorless enough that night, during an acceptance speech, Eminem later told his rival Moby (who had criticized Eminem in 2000 for homophobic and sexist lyrics) that "I will hit a man with glasses" if he didn't stop hurting his feelings. Classy. -- MT

Lil Kim Shows Up Fresh From Prison (2006)
Having just been released from jail, Lil Kim appears at the ceremony in a prison jumpsuit, ostensibly escorted by guards. Her speech before presenting the award for Best Male Video is just full of excitement (for obvious reasons), making it the rare VMA moment to be purely enjoyable without even a touch of awkwardness. -- ET

Kanye Interrupts Taylor Swift (2009)
Perhaps the most famous VMAs moment in recent history, "I'mma let you finish" might also be one of the most important. Sticking up for his friend (and deserving artist) BeyoncÃ©, Video Vanguard recipient Kanye West found himself at the apex of the popular "foot in mouth" narrative that had coalesced around him. With his reputation on the rocks, Kanye retreated to record My Beautiful Dark Twisted Fantasy, an album for which we can at least partly thank the VMAs. -- ET

"Trap Lord in Stores Now" (2013)
When Jason Collins -- who had recently come out as the first openly gay male athlete in a major professional sport -- signed up to present at the VMAs, he surely didn't expect to be faced with the sheer awkwardness and obliviousness of A$AP Rocky. Flacko clearly has no idea how to deal with being on the stage with Collins, following up a heartfelt speech with a plug for A$AP Ferg's album and an off-handed wave indicating that, yes, he is aware that Collins is gay. Trap Lord is in stores now. Never forget it. -- ET

Miley Cyrus Twerks on Robin Thicke (2013)
Lots of people just don't get Miley Cyrus like we do. She's always been comfortable with herself, but getting to the point where she's as public and unabashed about it as she is now necessitated a few bumps in the road, including this performance with creepy older man Robin Thicke. At the time, the spectacle brought down a hail of thinkpieces about everything from cultural appropriation to discussions of Miley's sexuality to complaints about Thicke. -- ET

BeyoncÃ© Declares Herself a Feminist (2014)
This was a banner moment both for Bey and for the mainstream success of the current version of the feminist movement -- or at least one part of it. No matter what you think of the performance, or of the ideas (watered-down or otherwise) it tried to convey, it's pretty incredible that a massive pop star did something like this at all. And it could only have happened at the VMAs. -- ET