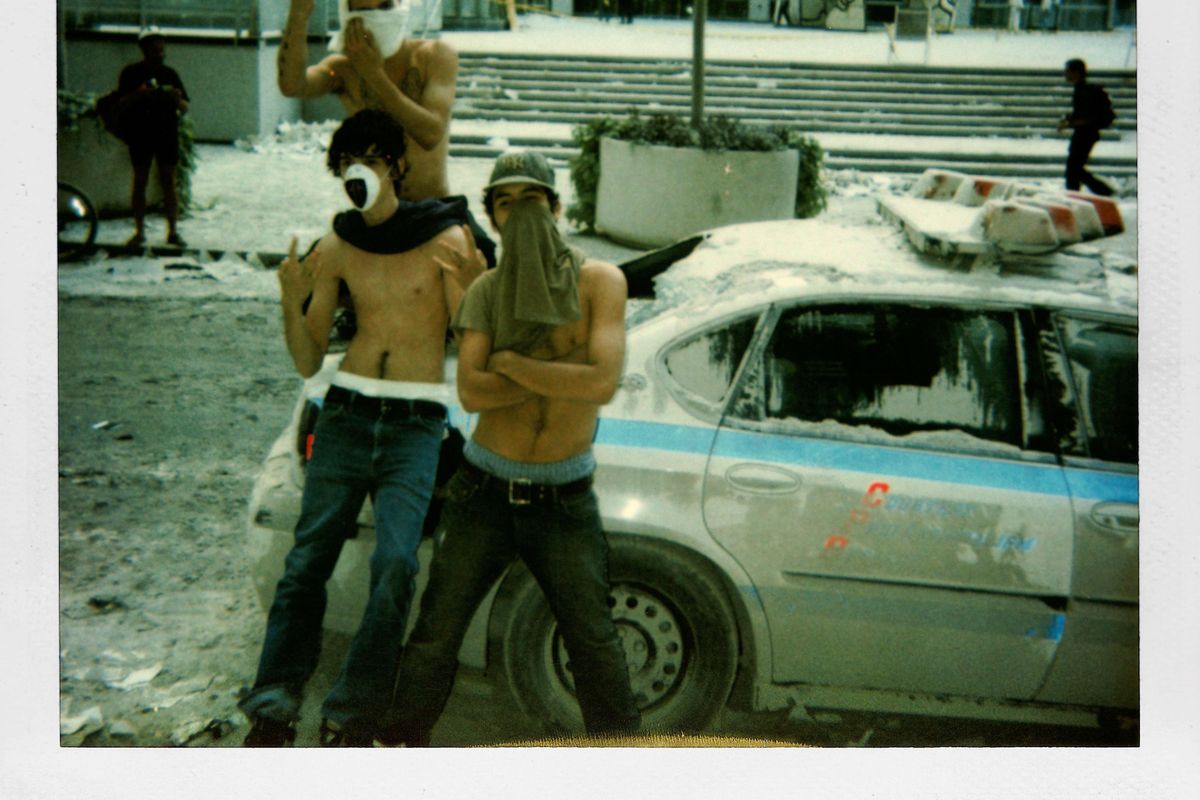 Hauser & Wirth (511 West 18th Street) opens their first NYC show with the L.A.-based artist Mark Bradford on Saturday, November 7, 6 to 8 p.m., and up until December 23rd. The exhibition, "Be Strong Boquan," includes a new multimedia work called "Spiderman," plus several paintings, sculptures and a video, "Deimos," that depicts "the end of a party...(and) the reality of the AIDS crisis." Check out THIS portrait of the artist in the June 22nd issue of The New Yorker.

This week, the Bronx Museum of the Arts 1040 Grand Concourse, Bronx) opens the first Martin Wong retrospective since he passed away in 1999. Over 90 of the Chinese-American artist's paintings are included in the exhibition, "Human Instamatic," on view from November 4 until February 14. Stop by Sunday, November 8, 3 to 5 p.m., for the museum's Fall Season Open House and you'll also see works from their permanent collection and hear music from Mobile Mondays DJs.

The Brant Foundation (941 North Street, Greenwich, CT) opens "Freeze Means Run," the first US solo exhibition since 2006 by the late Dash Snow, on November 8 and up until March. The show includes over 100 Polaroids, films, sculptures and collages; along with his large-scale piece "Book Fort" and the installation, "Untitled (Penis Envy)," from 2007.

Team Gallery (83 Grand Street) opens a new show, "Winter," by New York-based photographer Ryan McGinley on November 5th. This is his seventh solo show with the gallery and runs concurrently with another McGinley show called "Fall" at the gallery's Venice, California, location. Both are on view until December 20th.

The Museum of the Moving Image (36-01 35 Avenue, Astoria, Queens) takes a look at Hollywood film iconography via a big group show featuring 40 artists called "Walkers: Hollywood Afterlives in Art and Artifact" opening on November 7th and up until April 10, 2016. Robert M. Rubin curated the exhibition, including everything from photos and sculptures to costumes designed for Rosemary's Baby.

The 2015 IFPDA Print Fair runs from November 4th thru the 8th at The Park Avenue Armory (643 Park Avenue). Eighty-nine exhibitors are expected, showing various works including prints by Mike Bidlo -- who will also be on hand to "sign" 73 fair attendees -- Sue Coe, Tracey Emin, Sol Lewitt, William Kentridge and many more; plus there's an artist talk with Kiki Smith on Saturday at 11 a.m. s Their "sister fair" Editions/Artists' Books Fair opens on November 5th with a VIP preview and then runs through Sunday at The Tunnel (269 11th Avenue).


The Shop at The Standard High Line (442 West 13th Street) has another cool opening this week with "Suckadelic: Toy Lords of Chinatown" featuring bootleg toys by The Super Sucklord (aka Morgan Phillips) opening on Thursday, November 5, 6 to 8 p.m., and on view until November 15. Music on the night by Crystal Pharaoh.

The Hollows Artspace (708 Bushwick Avenue, Brooklyn) opens a group show, "Staves, Gussets, Laths, Tenons," on Wednesday, November 4, 6 to 10 p.m. The 21 featured artists "integrate the support of their media into the visual; re-balancing relations of object, material, value, craft and function." The show, curated by Piril Gunduz and Baptiste Semal, is up until December 20.

Shut NYC and The LB Project open a group show, "An American Art Exhibition Through Skateboarding," on Thursday, November 5th, 7 to 10 p.m., at Vocal NYC (77 Bleeker Street, suite C212). Works by over 20 artists and photographers will be on view including Sam Taylor, Aaron Smith, Meka, Kyle Platts, Brian Gaberman and more. The show benefits the Harold Hunter Foundation.

Sean Kelly (475 Tenth Avenue) opens two shows on Friday, November 6, 6 to 8p.m.: "Agnosia, An Illuminated Ontology" with an installation of neon works by the conceptual artist Joseph Kosuth, and "Unique," featuring a selection of Polaroids by Robert Mapplethorpe. Both are up until December 19.

Callicoon Fine Arts (49 Delancey Street) has a show of new works by Jason Simon called "Request Lines Are Open" opening on Sunday, November 8, 6 to 8 p.m., and on view until December 20. The show features several works generated by the artist's relationship with upstate radio DJ Liberty Green, including 8,000 letters from nearby prison inmates and photos of Green's home and the station, WJFF.

The Dia Art Foundation's fall gala honoring Robert Ryman is on Sunday, November 8, 6 to 9 p.m. This event is "by invitation only." The Dia:Chelsea's upcoming Ryman exhibition will open on December 9. ALSO: Flux Factory's fall benefit and 21st Birthday Banquet is on the 7th at 8 p.m. Tickets are available HERE.