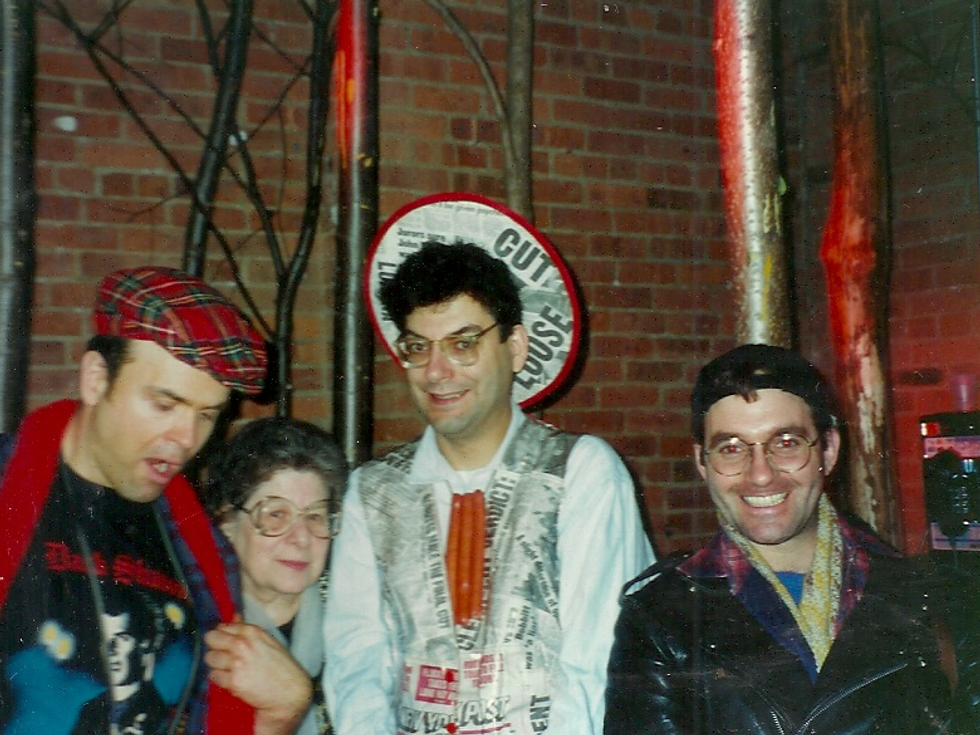 The 12 Most Insane Celebrity Parties I Ever Threw

In the 1980s and '90s, dance clubs like Limelight, the Tunnel, and Danceteria had crazy budgets to help me celebrate my birthdays with whatever kitsch star or scandal figure piqued my interest at the moment. So we'd throw elaborate parties with them as the guest hosts--and if they weren't available on my birthday, we'd simply change the date of my birthday! Here are the 12 nuttiest events of this ilk that are still clogging up my memory bank with delight.

Me and Donna Douglas
Donna Douglas bash at Limelight
Donna, who sadly passed away on New Year's Day, was famous for playing the spunky Elly May Clampett on The Beverly Hillbillies. Plus, she was the one who was considered ugly because she didn't have a pig snout in that famous Twilight Zone episode about beauty being in the eye of the beholder. And in person, she was an utter delight! She dressed like Elly May and pretended to be a rip-roaring hillbilly, not a famous actress, and we had the haystack and all the other appropriate set decorations set up to make her feel right at home.

Me and Brooke Shields
Brooke Shields and Julia Sweeney at Limelight
At this early '90s soiree in the chapel, Brooke was such a doll and so was Julia, who famously was playing the hilariously androgynous Pat on SNL. Both of them even helped judge a rather endless "Pat" lookalike contest at the height of the evening. Alas, Lorne Michaels wouldn't allow Julia to dress as Pat for the party, plus the Limelight employee who was supposed to help me organize all the details was so cracked out at this point that the food was miniscule, the music was droning, and no photographers or press were invited. And the whole point of these bashes was to get mentions!

Me with mom and friends at John Wayne Bobbitt party
John Wayne Bobbit, the Tunnel
In 1993, Bobbit's hideous behavior resulted in his wife Lorena slicing off his penis and throwing it to curb, as if in a John Waters movie. So the next year, he was the guest at my birthday bash at the Tunnel (Limelight's sister club), where I wore a necklace of dangling hot dogs and a vest made of sensational headlines about the Bobbitt incident. Meanwhile, the food consisted of what looked like bloodied slabs of meat, with two hard potatoes for the balls. It was genius, I tell you. As for Bobbitt, he seemed nice enough to me (though I'm sure he's a beast), and one female friend almost followed through with his flirting just to see if he could get it up.

Me and Divine Brown.
Divine Brown, the Tunnel
In 1995, Divine made headlines when actor Hugh Grant was caught cheating on his soon-to-be-ex Elizabeth Hurley with that L.A. hooker in his car. As soon as we heard about her infamously servicing the classy British actor, we wanted to fly her in for my birthday -- and in she came, all gussied up and full of charisma. Out of utter respect, I dressed like a pimp!


Zelda Rubinstein, Limelight
Immortalized as the medium Tangina Barrons in the classic horror flick Poltergeist, Zelda was just as short -- and delightful -- in person. I adored her and even brought her into the light.

Barbara Eden and my mom.
Barbara Eden, Limelight
The I Dream of Jeannie star was such a pro and really nice, and so was her husband, though when he went to the bathroom, he got lost and ended up almost getting stuck in the gay sex backroom! Mercifully he found his way out of there as if by magic and got back to the party.

The Coronet brothers, Danceteria
When I first landed my own column in 1984, promoter Alan Rish threw me a fab bash where the guests of honor were two brothers famous for a cheesy local commercial for their Long Island furniture store. Their most famous line in the commercial was "No talking orangutans," which became notorious for being fairly nonsensical. When I dragged the guys onstage and got them to say it, the crowd was as dumbfounded as the home viewers were whenever that ad showed, but I was beside myself. Ah, the memories.

Sukhreet Gabel.
Sukhreet Gabel, El Morocco
An ex aide for Bess Myerson, Gabel had testified against her own mother in a bribery trial, so promoter Chip Duckett and I were desperate for her to host my 1988 birthday. And she did, even agreeing to sing at the event. ("I sang in court, why shouldn't I sing here?" Sukhreet told the assembled media -- and there were tons of them. My eyes were blinded from all the flashes.) I started by singing "Dear Sukhreet Gabel" to the tune of Judy Garland's "You Made Me Love You (You know, "Dear Mr. Gable..."). Then Suki came out to duet with me on a wacky version of Gilbert and Sulivan's "Let The Punishment Fit The Crime." And by the way, we all dressed in zebra print ensembles, simply because we felt like it!

Me and Pia Zadora

Pia Zadora, Palladium
In the mid 1980s, I was asked to host Pia's promo party in the Mike Todd Room of the sprawling, art-heavy club, and I had a blast being part of something that was just so me.

Me and Eddie Fisher.
Eddie Fisher, Bananas
We truly went bananas at that St. Marks Place restaurant in the '80s when my birthday bash was uplifted via an appearance by the legendary singer, who had famously dumped Debbie Reynolds for Liz Taylor back in the '50s. But he didn't dump my party--and neither did the diverse guest list that included Margaret Whiting, Jack Wrangler, Ricki Lake, Tama Janowitz, Bridget Fonda, and Christopher Durang. Oh, and I dressed like a giant cockroach, mainly to show how indestructible I am.

Me with Gary Coleman.
There was also Jerry Springer at Lucky Cheng's, Gary Coleman at Club USA, and so many other magical nights of me, me, me.