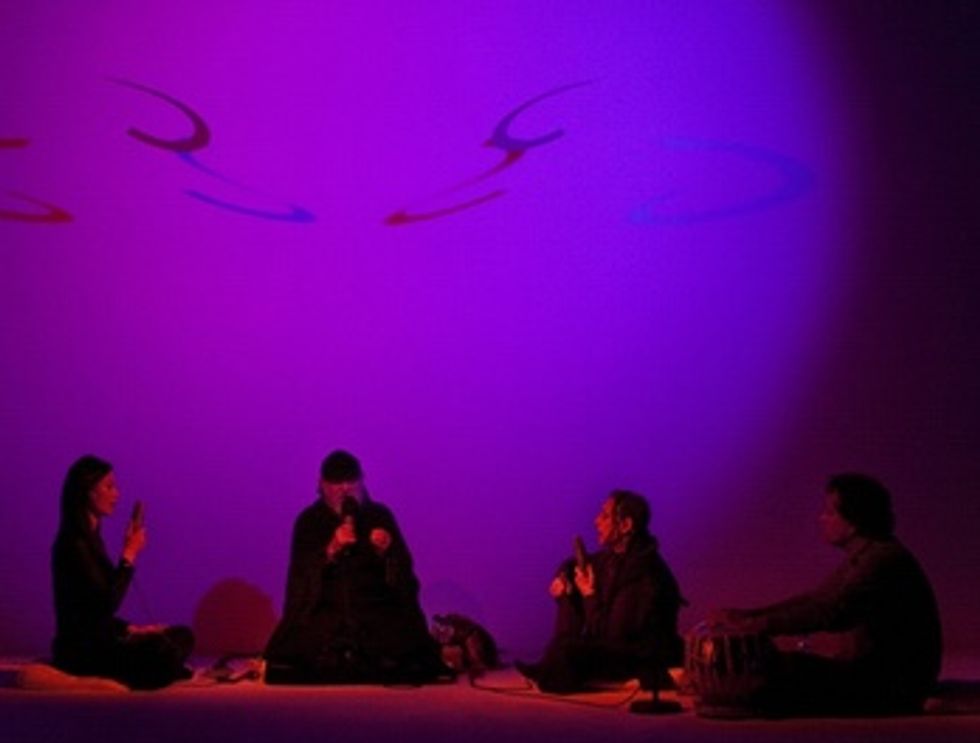 The 11 Art Openings to See This Week

Jenny Holzer created a new work with "scrolling light projections" for the Frida Kahlo show up at the New York Botanical Garden.  Each evening from June 10 to 13, dusk until around 10 p.m., gigantic images of poetry can be seen on the building housing the current Kahlo exhibition "Art, Garden, Life."

Olafur Eliasson -- he's the Danish-Icelandic artist that installed the 4 giant waterfalls in NYC in 2008 -- has an ongoing installation on the High Line called "The Collectivity Project." The public is invited to play with 2 tons of white LEGO brinks and add mini-constructions to several built by noted architects including OMA New York and Renzo Piano.  Check it out through the end of September on the High Line at West 30th Street.

Haluck Akakce
As part of their current exhibition of new works by Haluk Akakce, Richard Taittinger Gallery (154 Ludlow Street) is hosting a film screening on June 11th, 6:30 to 8:30 p.m., featuring several of the artist's early (2002 to 2007) computer-generated video works.  The artist will be on-hand for a talk led by Kathy Battista, Sotheby's Director of Contemporary Art, New York.  The gallery's current Akakce show is up through June 21.

Pace Gallery (508 West 25th Street) hosts a lecture on June 11th, 6 p.m., in conjunction with their current group show, "Eureka," which takes its name from Edgar Allan Poe's eponymous prose poem published in 1848.  Dr. Barbara Cantalupo, author of a new Poe monograph, will offer her insights.  The exhibition featuring artists who "observe and map the cosmological, metaphysical and scientific" remains on view until June 27th.

The Gift Shop at Red Bull Studios (220 West 18th Street) hosts a release party for fashion photographer Ben Rayner's new book "Organized By Title" from 8 to 10 p.m. on June 12th.  And then, starting at 10 p.m., there's a multi-media, exhibition/performance by Chris Rice and Joe Kay called "CKTV."  The work includes unique karaoke videos by various artists which they'll perform live.  It's free, but you must rsvp to: info@agwgrp.com


Dia: Chelsea (545 West 22nd Street) opens a sound and light installation called "Dia 15 VI 13 545 West 22 Street Dream House" by La Monte Young, Marian Zazeela and Jung Hee Choi with a special performance on June 13th, 9 p.m., then running from June 16th to October 24th.  On the 13th, all three artists will lead the Just Alap Raga Ensemble in a tribute to Pandit Pran Nath.  The work was originally presented at Dia from 1979 to 1985, but this version includes a new site-specific environment and configuration.

If you're wondering what's up with the colorful pianos seen around New York City recently, they are part of a city-wide project called "Sing For Hope Pianos" that placed 50 artist-designed pianos throughout the 5 boroughs until June 21st.  You can go ahead and play your fave tune, attract a crowd and interact with the community -- at the end of the project, the pianos will be donated to local organizations.  Here's a list of locations and the names of the artists.