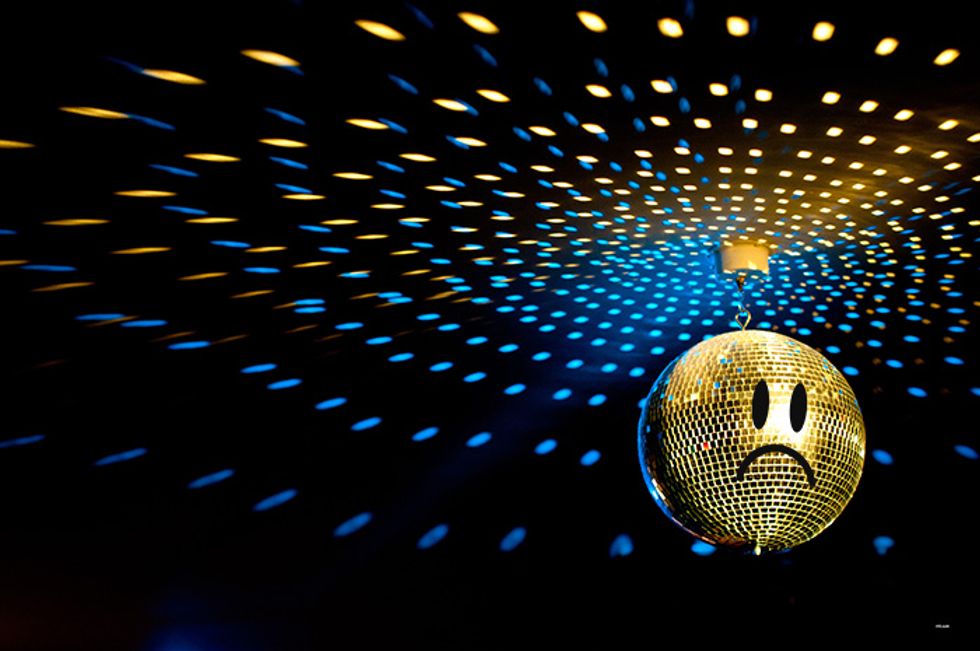 The 10 Worst NYC Nightclubs In History

Nightclubs are places for catharsis, bonding, and sheer joy--unless they're bad. When the elements don't click, they can be like an uninsured visit to the dentist. Here are the worst Manhattan clubs I've ever experienced, and I've been to a lot.

Club USA (218 W. 47th Street)
This was Peter Gatien's 1992-'95 retread of an old theater that suddenly became home to the last gasp of the club kid movement. The plexiglas slide that took you from the balcony to the main floor was a jazzy touch, and there were some other sexy motifs to mirror Times Square aesthetics, but overall, the result failed to enchant or enthrall. In fact, I stood there on the balcony with Gary Coleman one night, looking down and wondering how the nightlife died.

Nell's (246 W. 14th Street).
Reacting against the peak of the big spaces and the madness, Nell's opened in 1986 as a staid supper club presided over by former Rocky Horror costar Nell Campbell. It was snooty and boring, and at the time I wrote, "It's a scene all right, but less for those who are going places than for those who are already there and aren't about to budge." Not surprisingly, Patrick Bateman of Bret Easton Ellis's novel American Psycho went to Nell's a lot. Today, it's Up & Down, home to Duh Fridays.

Magique (First Avenue and 61st Street).
Though we nicknamed this neon-laden disco Tragique, it wasn't quite as sad as that may have sounded. But the late '70s/early '80s club still had an also-ran feeling to it, with blah events and second-rate stars. The space later proved way more useful as a Bed, Bath, and Beyond.

Le Baron (32 Mulberry Street)
I feel guilty putting this in since they're still operating, but I find the long, narrow bar cramped and the balcony a bit shaky. On any of the three levels, you might be thinking, "Where are the exits?" But the Chinese design motifs certainly work for Chinatown.

Stringfellows
British businessman Peter Stringfellow opened this East 20s disco/supper club in 1986, not knowing enough about the NYC scene and what made it tick. He should have realized it was a bad idea to hire a doorman who would totally recognize me, but still not let me in because he couldn't find my name on the list (even though the publicist had doubly confirmed it in advance. Yes, I have Italian Alzheimer's -- I forget everything except a grudge.) Stringfellow at least tried to make up for this gaffe with constant apologies and charm, but his stab at fabulousness was clearly doomed. It later resurfaced as a strip joint.

Big Kahuna
In the transitional year of 1987, on Broadway near Houston Street, there surfaced this Hawaiian surf-themed hangout partly designed for Wall Street brokers on their way home. Back then, I described the "conga line of yuppies" waiting to get in. I was not one of them.

Tool Box (1742-Second Avenue)
This obscure bar has been running uptown for years, though the one time I dropped by  (on a week night), you could hear the gay crickets chirping. The website promises "New York's best kept secret," and apparently that's no lie! But like I say, it's been a staple forever, so long may their tools flourish. Runner-up: Notspot Stairs.

Pravda
This SoHo club was only so bad because it was so good. You see, in the late '70s, Rudolf Pieper (who later did Danceteria) premiered it, causing a crush of fabulous people to descend on opening night and make quite a scene. Alas, it turned out to be closing night too. The cops shut the joint down and it never managed to reopen. The Moose Murders of nightlife, Pravda is legendary -- but mainly because it was a big disappointment that titillated our hopes and dashed our spirits.

Red Zone (W. 54 Street)
This was a cavernous place with shellacky walls and unctuous owners, desperately trying to cash in on the late '80s/'90s scene. But despite the presence of club kids and great DJs, it felt like more of a Dead Zone  (though I still went all the time, of course).