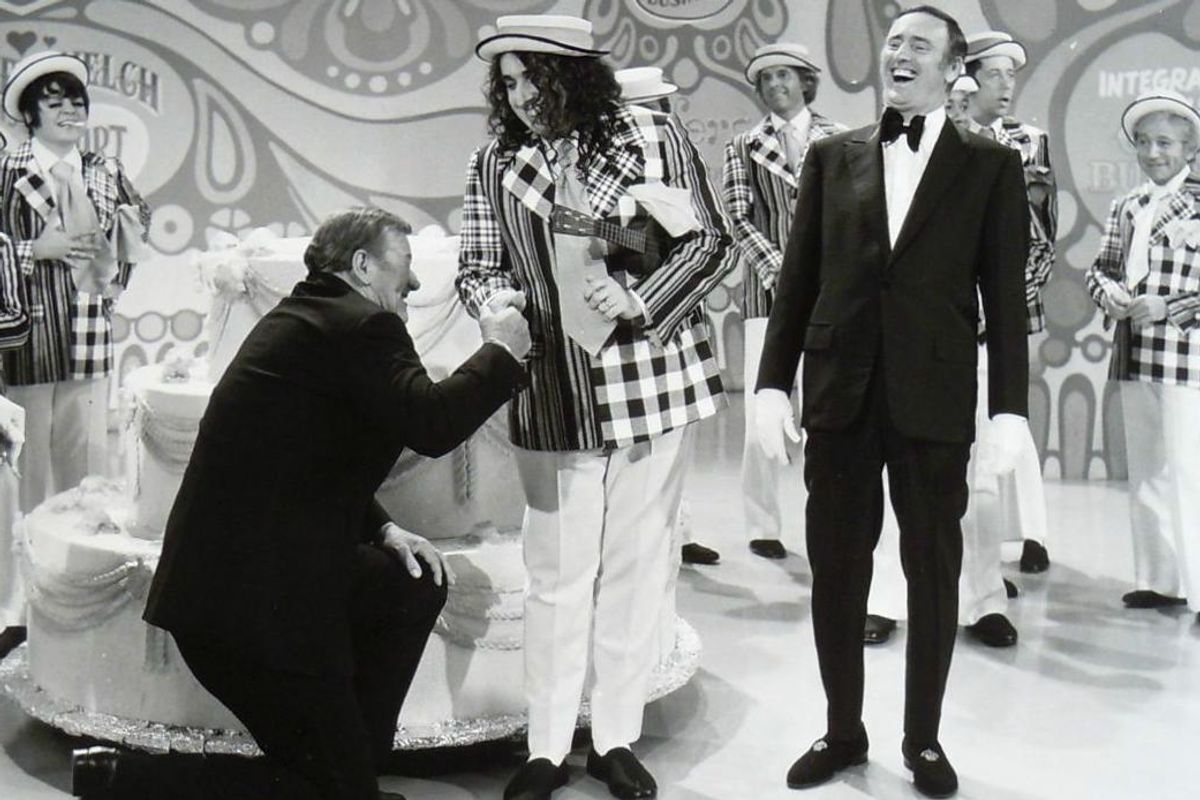 The 10 Weirdest "Celebrities" Of Yesteryear

You think there were no weird, offbeat celebrities before reality shows came along? You think Honey Boo Boo and the Kardashians are the height of bizarre? Well, that's a weird way to think. Let me take you back to the 1960s, '70s, and '80s, when a bunch of homegrown freaks permeated the media, to delightfully kooky effect. Here are 10 flavorful gems who attained the ultimate in wacky stardom.

THE SINGING NUN
One of the weirdest pop hits of all time was "Dominique," a 1963 French song written and sung by Soeur Sourire, aka Jeanine Deckers, the Singing Nun. The lilting, minimally arranged ditty about Saint Dominic proved irresistible, becoming a huge hit in 11 countries around the globe and making every nun stuck in a convent start fantasizing that she could be the next pop diva on the charts. But fame wasn't all it was cracked out to be for the unhappy Belgian sis. In 1985, Deckers and her girlfriend, Annie Pescher, made tragic headlines by committing suicide together. The reason was supposedly financial problems, not the fact that they had finally seen the awful Singing Nun movie starring Debbie Reynolds.

TINY TIM (1932-1996)
Born Herbert Khaury, Tiny Tim early on discovered that he had a taste for singing old standards in an unnatural yet arresting high pitched voice. He made a sensation on the wacky comedy show Rowan and Martin's Laugh-In, where he'd pull his ukelele out of a shopping bag and trill "Tiptoe Through The Tulips" while smiling and touching his hair. In 1969, Tiny married a very naÃ¯ve young woman named Miss Vicki on the Tonight Show, causing another freakshow ratings bonanza. The marriage, however, was a bit of a sham -- though Tiny had two more after that. But I'll give the guy this much -- his oddball act wasn't an act at all. He was a true outcast, not faking his weirdness for a second. In fact, the man wore adult diapers -- not because he had to, but for cleanliness' sake -- and he was obsessed with UFOs. He may have been one himself.

MRS. MILLER (1907-1997)
Elva Miller was the original William Hung. She became famous by singing in a shrill belt and doing so in such an off key, off-the-beat manner that she caused mass nausea with every note. The woman willfully massacred songs like "Moon River" and "Downtown," and with the latter, she actually made the Hot 100, the record-buying public obviously needing a good guffaw. And once she realized her appeal was in being bad, Mrs. M went along with the joke, singing even worse, if such a thing was possible. Meryl Streep is playing a similar character, the talentless socialite Florence Foster Jenkins, in a movie. But who'll be brave enough to play Mrs. Miller? Madonna?

MISS MILLER (1897-1990)
Not to be confused with Mrs. Miller, the unmarried Lillian Dorothy Miller became famous solely for sitting in audiences from the 1950s to the 1980s. (God! I've sat in audiences almost every night of my life, and never got famous for it. Not yet, anyway.) In her pill box hat and holding on to a lovely clutch, the woman sat there watching tapings of the Tonight Show, the Carol Burnett Show, and the Merv Griffin Show, becoming a celebrity just for her relentlessness, her look, and her no nonsense persona. A government typist until 1958, Miss Miller sometimes got to banter with the hosts or guests from her perch in the audience and was even brought onstage by Jack Paar at least once. But that didn't go to her little old hatted head. She gladly went back into the audience for many a Merv.

ANGELYNE
A blonde actress and singer who wasn't getting anywhere, Angelyne splashed herself on various L.A. billboards starting in 1984 and people started to take notice. The surgerized sasspot got some parts and bookings and was buzzed about to the point where in 2003, she actually ran for California governor, using her pink Maltese as her mascot. Alas, Angelyne lost to another cartoon character with even bigger tits, Arnold Schwarzenegger.

DR. RUTH WESTHEIMER
The pint sized German psychologist seemed like your cheery aunt as she went on talk shows and chirped about all sorts of incredibly dirty things. As a sex therapist, she served great messages about liberation and responsibility, and her perky demeanor helped it all go down easier, making her a superstar for all the world to get off on. The Wall Street Journal got it right when they described her as "a cross between Henry Kissinger and Minnie Mouse."

CLARA PELLER (1902-87)
Another feisty old bag, the Illinois-born manicurist and actress hit paydirt in 1984 with a Wendy's commercial where, at a made-up rival fast food place, she looked at a puny burger and exclaimed, "Where's the beef?" Her crusty, funny delivery made her a star, and "Where's the beef?" became the most overused tagline of the decade, often relied upon for a salacious innuendo that Dr. Ruth probably loved. Alas, Peller was fired after she did a commercial for Prego Pasta Plus spaghetti sauce and said, "Where's the beef? I found it! I really found it!" Wendy's correctly felt this showed that she found the beef somewhere other than Wendy's, so they axed her. Peller replied, "I've made them millions and they don't appreciate me." Yes, she had a beef.

THE BARNUM & BAILEY UNICORN
In 1984, the B&B circus debuted "the living unicorn" named Lancelot and he became a sensation, even though he was clearly a goat -- or several goats -- with a grafted horn, not the mythical creature of our wildest dreams. As the public lined up to buy tickets to gawk at this creature, animal organizations cried cruelty and there were claims of fraud, followed by the circus taking out ads saying, "Don't let the Grinches steal the fantasy!" When they finally dropped Lancelot from their roster and the unicorn lost his proverbial horn, it was very Tennessee Williams. At least that's how I saw it.

JEANE DIXON (1904-1997)
Dixon was an entertaining crackpot with a syndicated astrology column and lots of nutty predictions that would appear in The National Enquirer, including macabre foreshadowings that rarely came true. She predicted JFK's assassination, though she had also predicted that JFK wouldn't even become President, so that kind of negates her triumph. Amazingly enough, President Nixon actually admired Dixon, met with her, and listened to her terrorism predictions! But one thing Dixon never predicted was her own death. That came as a surprise to everyone.