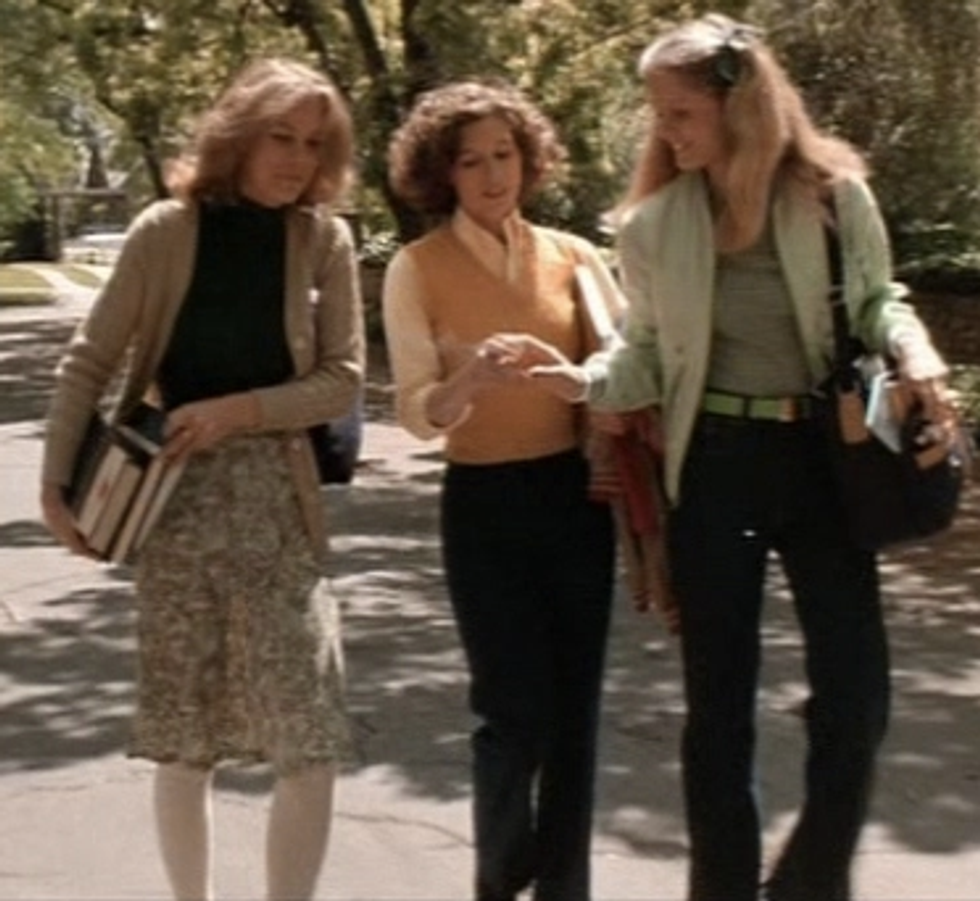 The 10 Most Stylish Horror Movies To Set The Halloween Mood

With Halloween's sticky, glittery scythe drawing nigh, there is no better time to settle in with a horror movie or five.

And why not choose one that's as chic to the eye as it is reveling in the shimmering decay of the undead?

While many horror movies place carnage over everything else, some have been able to find the perfect balance of terror and genius sense of fashion, which end up perfectly complimenting each other.

Here are the 10 most stylish horror movies for the Halloween season, ranked.

10. John Carpenter's The Thing (1980): Carpenter's remake of the 1951 sci-fi classic does everything to the nine: relentless gore, incredible sound editing, cinematography, music and WARDROBE. His characters--a team of all-male scientists, trying to survive a brutal, carnivorous alien in an Antarctic research outpost--don fur coats, trench leather coats, long-johns, huge, ugly boots, and none of them look like they've showered in weeks. But that's what makes it so great; the grime and bleakness of the situation, and the brute, utilitarian wardrobe just fits entirely together. And it's really hot.
Kurt Russell, bearded and clad in leather.

9. The Omen (1976): Aside from the obvious iconic moments-the nanny hanging herself at Damien's birthday party, freak decapitations, the little "666" haircut moment-the movie was peak 70s in its fashion of the aristocratic family in focus.
From Damien's black riding cap in the infamous final scene, his Satanic nanny's puritanical coats and skirts, to Lee Remick's sky blue head wrap, it's snobbery at its most evil.

8. Suspiria (1977): Dario Argento's bloodbath set in a ballet school run by murderous witches takes everything to the extreme. Prom gowns, pantsuits, and billowy blouses that look like something Diane Von Furstenberg would have worn/maybe still wear.

The headmistress witches on the other hand? Kris Jenner WISHES.


7. Poltergiest (1980):  The movie captured the menacing dullness of living in the early wave suburban McMansion developments, but the characters' outfits are as early 80s alive as the ghosts haunting them are dead. The onesies, short-shorts, rugby shirts, and over-sized Oxfords: WASP Hell.

And JoBeth Williams' football jersey as a whole outfit? THE LOOK.

6. The Shining (1981): Jack Nicholson and Shelley Duvall's wardrobe may not be the most diverse in Stanley Kubrick's horror masterpiece, but can you blame them? They're trapped in a impossibly large hotel in the Colorado Rockies for the winter. Comfort is key. Plus there are ancient ghosts trying to kill their son. But don't tell me Nicholson's flannels and maroon cardigan sweater isn't synonymous with PBR. It's as Brooklyn hipster as they come.
And I swear I've seen Williamsburg moms wearing this Duvall outfit on the L train.


5. It Follows (2014): The time period-ambiguous indie horror was a mega hit, praised for its acting, music, and genuine horror. But the lack of grounding in time makes it that much more disorienting. Is it some alternate dimension where each year that passes is 3 years our time, so it's still somewhere in the 80s? But with somewhat updated technology? Who knows. Basically, the movie felt like being murdered in an American Apparel store.


4. Halloween (1978): John Carpenter's OTHER horror classic is 70s Americana in the most yasssss way. The movie was so low budget, Curtis actually bought her own character's clothes herself at JCPenney. A true queen.