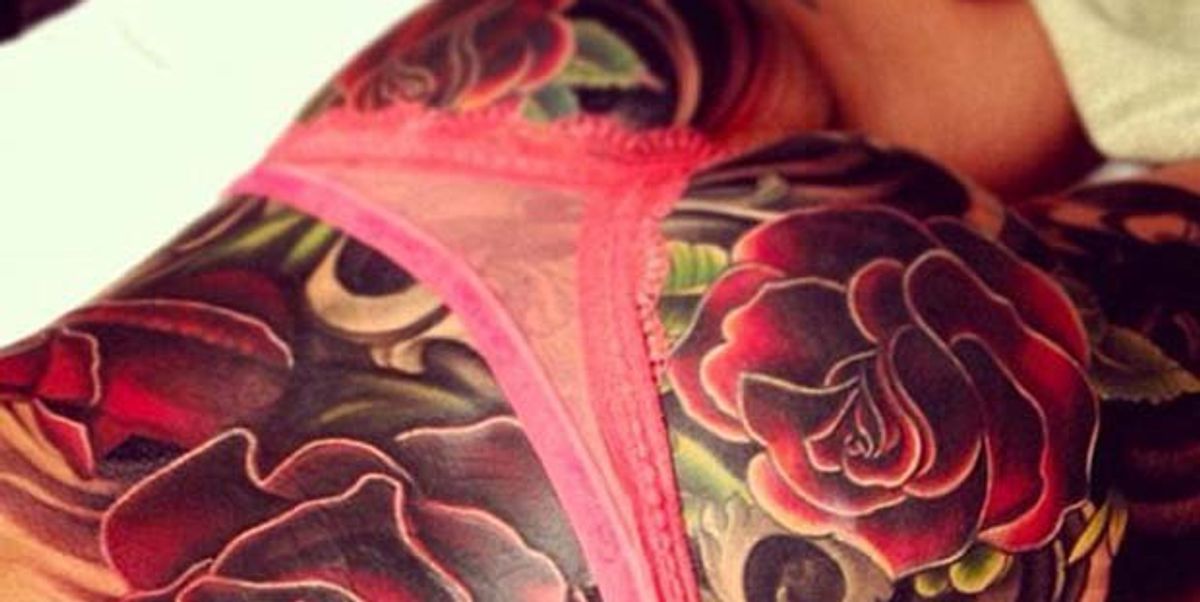 So we may have already rounded up the 10 fugliest celebrity tattoos last fall, but as the cycle of celebrity goes, there's a whole new batch of up-and-comers, has-beens and British breakthroughs to make fun of -- so why not create an appropriate 2015 sequel to one of our greatest hits? Ater all, there are just so many terrible tattoos and when you're thrust into the limelight and constantly photographed, that tramp stamp or tribal tat you got down in Cabo back on Spring Break '01 is gonna resurface along with a penchant for emotional outbursts and your stress-induced adult acne. Below we round up 10 more of our favorite atrocious inks adorning everyone from Jennifer "Every Woman" Lawrence to Cara "Inescapable" Delevingne -- though IDK maybe you'll disagree and also think it's essential to tattoo yourself a reminder to #DrinkMoreWater.

Even more unsightly than his lion's head chestpiece is none other than that terrible Heinz Ketchup tattoo he merely got to signify his, uh, very egalitarian love of ketchup. Like turning yourself into a walking billboard for high fructose syrup is one thing, but I think we can all agree that ketchup is a pretty whatever on the scale of interesting condiments. Granted, we're condoning Grey Poupon or (God forbid) Sriracha mayo tats, so maybe this is the lesser of all evils.

I get that her brand is #quirkymodel, but a) sole tattoos are the most painful/weirdest tats, b) bacon will eventually cease being trendy and c) couldn't you have used a font that didn't look like it came straight from the Pinterest homepage?

A scar-colored mark she herself dubs the "most unrebellious tattoo," JLaw's infamous, chemically-incorrect "H2O" tatt (more like "H-too-high-O," amirite?) is one for the record books. And the best part? Apparently she was compelled to get it while bonding with Liam Hemsworth and his family, you know, just as a reminder that she should always, uh, be hydrated.

While Girls Aloud member Cheryl Cole may not be super well-known outside of the UK, the fact that she literally has a full ass tattoo merits some sort of mention. Taking the Outkast "Roses really smell like poo-poo-oo" joke to a whole new level, it mostly just has us curious to know how her two-week healing period went -- like did she just not sit the entire time? Was it just a fortnight of stomach crawling? How did she poop?? SO MANY QUESTIONS.

Okay, it's one thing to get the ill-advised significant other name tat, but even worse is when you get it in another language and it ends up being misspelled (though IDK "Vihctoria" kinda has a nice ring to it). There's definitely a "LOL white people" joke in here somewhere.

Even arbiters of excellent taste sometimes slip-up, case and point Marc Jacob's pretty sizable right bicep tattoo of none-other than the stupidly lovable Nicktoon Spongebob Squarepants. The cartoon character forever the butt of very memeable "Thirst" jokes, he may be composed of a "really sophisticated" color palette, but we'd probably try and stray away from giving him permanent real estate on our essential appendages.

I know it's inspired by a song lyric, but there's something just so LOL-worthy about little Louis getting the most British tattoo ever. It's also appropriately located above an "Oops" tattoo, in case you had any reservations re: the levity of the situation.

Talk about teenage rebellion? But hey, at least the knuckle set-up is more original than a Momdonnna-heart tattoo.

Last but not least we have Zac Efron's infamous "YOLO" tattoo -- a product of what could only have been a drunken bro-bonding event where they all took off their shirts in a circle, beat their chests and screamed "You Only Live Once."