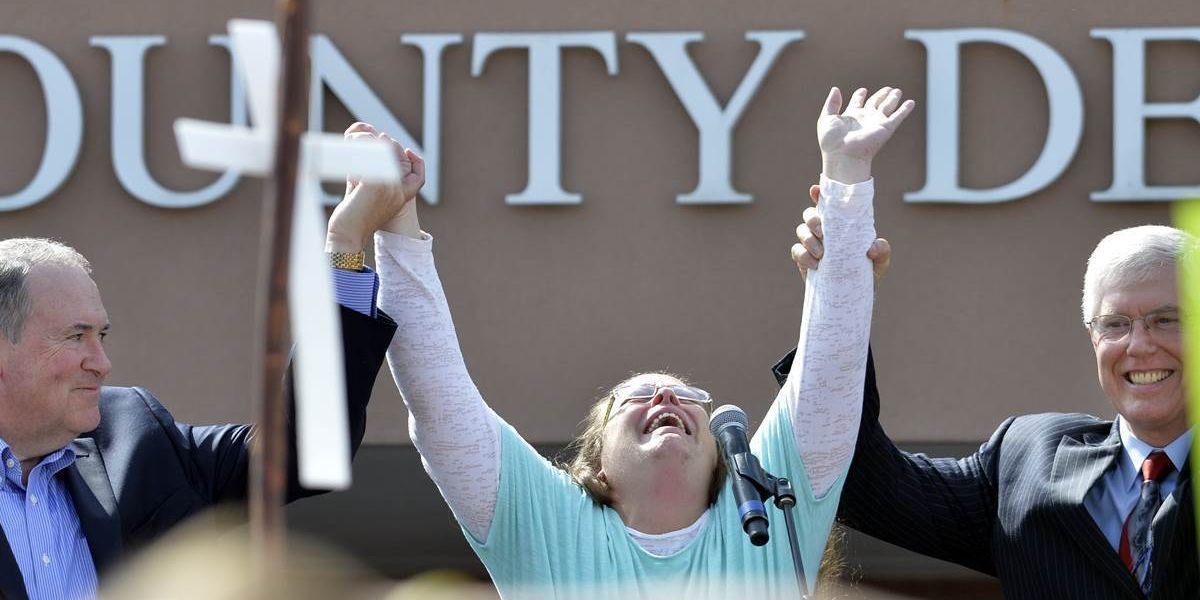 This time last year, it was truly remarkable to even fathom how 2015 could top 2014 in not only darkness, but also stupidity.

While there were obviously some amazing things that happened this year, it's important to reflect on the worst, most idiotic aspects, because, in the case of our society today, even if we DON'T forget history, we are still very much doomed to repeat it.

Happy New Year, 2016, may you be even a scant less horrible than everything that came before you.

Here are the 10 dumbest things that happened this year, according to Paper associate editor Carey O'Donnell and Eli Yudin, of @NotTildaSwinton.


By now we all know: Kim Davis, a federal clerk in Rowan County, Kentucky went to prison for 6 days in September, after refusing to issue marriage licenses to several gay couples, despite the Supreme Court's historic June 26th ruling on marriage equality.

She maintained that allowing gays to legally marry directly conflicted with her Fundamentalist Christian "religious convictions," even when it landed her in jail.

After being released from the Carter County Detention Center, Davis greeted a crowd of hundreds of supporters (some with signs comparing SCOTUS to ISIS) with her attorney and wonkey-eyed pig person, Mike Huckabee, at her side, who called her "courageous" and revolutionary.

Kim dramatically struggled to find her words, and then screamed things like "God's people have rallied, and you are a STRONG people" while raising her hand up in charlatan-preacher fashion.


Unfortunately, she wasn't struck by a falling asteroid midway through her garbage water spewing, but we did get this glorious mashup video...which almost made this moment worth it.

You know, the Revenant -- the movie that The Drudge Report ludicrously claimed included a scene where Leonardo DiCaprio is raped by a bear ... twice?

"ALL YOU LITTLE PUSSY-BOYS CAN'T HANDLE THE REVVVVVVVVV!!!!!"-Peter Travers, screaming into a full-length mirror.

3. This Variety headline about Jonah Hill

Shortly before gay marriage became legalized (I mean, a day before) conservative coalition Catholic Vote released this insane, over-the-top dramatic PSA, where a group of young people bravely "come out" as being against gay marriage.

The black and white filter, the sweeping ambient-piano, the self-righteous pondering....

"You're NOT alone..." she says, barely able to formulate words.

It would be a beautiful parody, if it wasn't 100% sincere.


Also, imagine being lost in a dark wood, and coming across this woman in a clearing, making that face.

5. This video of Iggy Azalea riding her horse (who she was worried had Lyme disease)


Heres some videos of me practicing some cross country type obstacles (i was kinda scared of the log) pic.twitter.com/wrPix9au8a
— IGGY AZALEA (@IGGYAZALEA) December 5, 2015

Just kidding. How mad were you guys for a second though?

7. The Jem and the Holograms Movie

If you're gonna make a nostalgia film, you should probably follow the source material in more than name. Instead, the people behind Jem and the Holograms decided to take an animated TV series dear to the hearts of a moderate amount of people, make it live-action, strip most of the interesting parts out, and release it with the grace of someone throwing a piece of meat out into the street hoping stray animals come pick at it. The movie made 1.3 million the first week at the box office, and $387,925 the second week. I can't give any more information because for the first time ever, they stopped reporting box office numbers after two weeks. To put that in perspective, 1.7 million might seem like a decent amount of money, but if we divide that by $14 a ticket, about 121,000 people saw it within 2 weeks. In the whole United States. Basically, 20% of Denver saw Jem and the Holograms.

8. The Continued Existence of the "Are Women Funny???" Debate

Women are funny. Always have been, even back in the 1800s, when I believe they were all forced to live in one large house in Philadelphia and could only come out between midnight and 2 am to gather food scraps from the street. So maybe we can stop the reviews and articles that say "Tina Fey Proves That Women ARE Funny!" "Tina Fey, Against All Odds, Manages To Make Me, A Strong Virile Man, Chuckle!" "Tina Fey, In Bold Move, SPEAKS In New Movie!" "Women In Movies That Aren't Documentaries About Menstruation? It's Happening… And It's Better Than You'd Expect!"

9. The Continued Existence and Growing Popularity of Gluten-Free Food

I know, I know, making fun of gluten-free food is the making fun of airline food of 2015, but I'm sick of it. First off, if you have celiac, I'm not talking to you. That sucks, and I'm sorry. My friend's dad has celiac, and he has to drink gross beer made out of like rice and newspaper clippings or something. But, if you don't have celiac, then guess what? You're fine. In 2011, Dr. Peter Gibson, professor and director of Gastroenterology at The Alfred and Monash University in Melbourne, released a study that indicated that gluten could affect even non-celiac persons' gastrological systems negatively. Immediately, everybody shunned it so hard you'd think gluten was a Men's Rights Activist. However, Gibson wasn't totally convinced, so he did that lovely science thing, "further research," and found that there was no real correlation between gluten and these stomach problems. It's mostly a "nocebo" effect (the reverse of placebo, where you make yourself sick because you believe something is bad for you.) Basically, someone handing you a regular cookie and telling you it's gluten-free is just as good for your stomach as an actual gluten-free cookie. So stop making shitty baked goods.

IT DOESN'T REACH HIS CHIN! IT IS JUST A RING AROUND HIS MOUTH LIKE HE'S A SLOPPY CHILD WHO JUST ATE A BOWL OF HAIR PUDDING! AM I THE ONLY ONE WHO SEES THIS?!