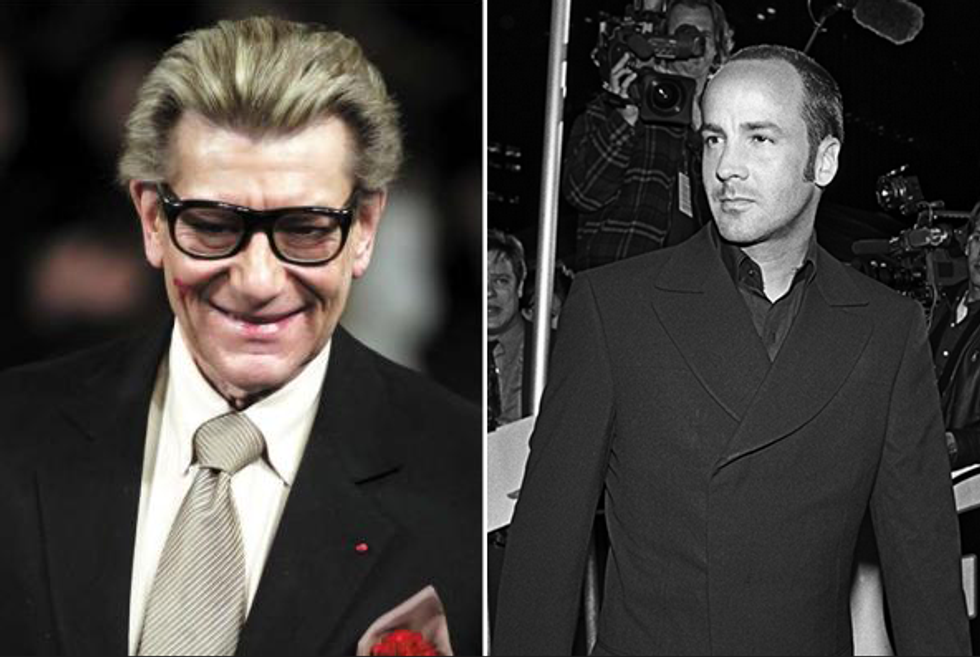 The 10 Biggest Fashion Feuds in History

The revered critic's perch at the New York Times allowed her a scarce and dwindling privilege in the fashion world; unfettered honesty. Her reviews were pointed and refreshingly unsparing which earned her the ire of some of the biggest names and brands in the industry. She has been black listed, if temporarily, from Armani, Hedi Slimane's Saint Laurent, and Carolina Herrera to name few. And then most famously there was Oscar de la Renta who in 2012 took a full page ad in WWD to publish an open letter to her in response to Horyn calling him the 'hot dog' of American fashion.

Perhaps one of the most protracted cold wars in New York fashion was between WWD Publisher and editor-in-chief John Fairchild and designer Geoffrey Beene. In the hermetic, pre-Instagram fashion landscape, a mention in Fairchild's broadsheet could make or break a designer's career in an afternoon and he wielded that power with mercurial relish. The story goes that after Beene took an exclusive on his new home to another magazine and once complained about the WWD journalist sent to interview him, he went mostly unmentioned in the daily for most of the 80s and 90s, joining the ranks of Fairchild ingrates called 'The Disappeared.' The editor claimed he never knew what started the chill.

The Karl v. Yves story goes so far back it's practically biblical, but began technically in 1953 when the two competed for a design prize as teenagers (Yves won). For the next five decades they were professional rivals though, one could argue, for the first half YSL led the way with his position at Dior and his era defining triumphs at his namesake label. However, Lagerfeld certainly has the spotlight, and the endurance, now as The Very Model of a Modern Major Designer at Chanel, Fendi and Chloe before. Their history together was the subject of the book The Beautiful Fall which chronicled their lives and loves (they famously competed for the affections of playboy Jacques de Bascher) and the all around haute glamour of fashions greatest frenemies.

The notoriously difficult and moody James accused the younger Halston of stealing his designs and wrote an article in Metropolis magazine in 1975, name checking the alleged thief and berating him as a copycat.

The catwalk queens were pitted against each other in the '90s at a moment when there was an unwritten, and bigoted, rule that there could only be one black top model. Claims of black-balling and model on model sabotage were addressed when Campbell appeared on Tyra Banks talk show to mend fences with a healthy dose of tearful air-clearing.

Call it the Kramer v. Kramer of 7th Avenue but when these exes went to court it wasn't about divorce terms but something far more high stakes; trademark infringement. In a string of lawsuits and countersuits Tory ultimately claimed her ex's new venture 'C. Wonder' was producing knock-offs of her namesake brand and the two settled in 2013 after Chris agreed to sell his significant stake in the Tory Burch brand. Since then Ms. Burch has launched a secondary sport line and joined fashion billionaires club.

Last spring Mr. Armani, 80, was quoted in the UK's Sunday Times Magazine recounting a conversation he had with Gianni Versace that, according to him, went as such: "He was looking at the models, and he said to me, 'I dress sluts. You dress church ladies.'" However, Donatella Versace did not take so kindly to the frank re-telling and fired back in the press calling Armani's comments "rude and tasteless" and continuing "..the only word that ever came from his [Gianni's] mouth was glamour."

Ford and CEO De Sole singlehandedly turned around the stagnating Gucci brand in the '90s, injecting it with Ford's signature sex appeal, bankable accessories and the ineffable fairy dust of relevance that made buyers and editors swoon. So it was doubly painful to watch it all fall apart in the new millennium when luxury group PPR, led by French tycoon Francois Pinault, pushed the two out over a dispute over creative control; Ford wanted it in total, PPR said no. The designer called the experience 'devastating' and the breathless press coverage made it all the more excruciating after the previous decades' thrilling rise.

In an era when women were barely allowed to wear pants the careers of both Coco Chanel and Elsa Schiaparelli in 30's Paris were nothing short of exceptional. Both fiercely independent and outspoken, they crossed paths and not always pleasantly in the Paris fashion scene between the wars. Allegedly, Mme. Chanel once 'accidentally' pushed Schiap (whom she referred to as 'that Italian artist who makes clothes') into a candelabra at a dinner party, setting her dress on fire.

When Ford assumed the creative reigns of YSL in 1999 he was on good terms with M. Saint Laurent and his partner Pierre Berge. But, after successfully taking the brand in a different direction to much acclaim, Ford revealed later in interviews he would receive nasty letters with lines like 'in thirteen minutes you destroyed 40 years of my work' from the tempermental Yves.