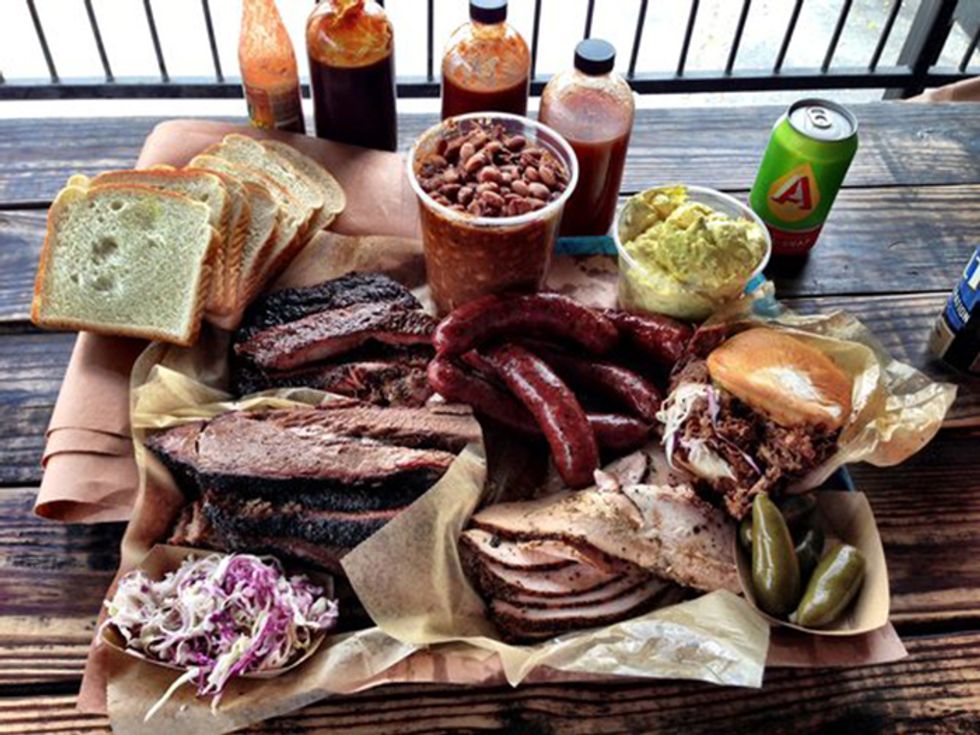 The 10 Best Ways to Cure Your SXSW Hangover

SXSW, America's premiere day drinking event (and, oh yeah, music/tech/film festival), begins tomorrow, which means that thousands of visitors will be flocking to Austin in need of a hangover cure. Lucky for them, the "music capital of the world" is also home to some of the best remedies around and we've rounded up our ten favorites, including world-renown BBQ, the best tacos you'll ever have, and the ever-necessary 5 o'clock (and 4 o'clock and 3 o'clock...) margarita.

1. Brunch at Bouldin Creek CafÃ©
Bouldin Creek CafÃ© offers one of the best brunch menus around -- not just in Austin, but anywhere. Located in a secluded suburban neighborhood accessible by public bus (or a ~10 minute cab ride), it features a distinctly southwestern take on breakfast staples, from incredible sweet potato tamales and veggie omelets topped with chipotle-pecan pesto to a signature milk-free twist on a London Fog (made with earl grey tea, the milk of your choice and vanilla) that's served in a steamy beer glass. The tented outdoor patio offers a great, breezy way to relax in the Texas sun while enjoying a lively atmosphere surrounded by cacti and agave.
Bouldin Creek CafÃ©, 1900 S. 1st St., Austin

2. Chocolate Cake and Coffee at the 1886 Cafe
The 1886 cafÃ©'s legendary chocolate cake has a recipe that reportedly dates back to, yes, 1886 and it involves something about mayonnaise that secretly makes it extra moist.  We may go so far as to say that this is the best chocolate cake you'll ever have in your life, and the cafe is conveniently located in the middle of all the SXSW chaos at the Driskill Hotel on Brazos Street (but unlike everything else at the Driskill Hotel, it's actually affordable). 1886 sells the cake in little cupcake sizes -- a perfect pairing with an afternoon cup of coffee between shows.
1886 CafÃ© and Bakery (at the Driskill Hotel), 604 Brazos Street, Austin

3. Queso at Kerbey Lane
Kerbey Lane has a few locations in Austin, and it's a really big student hangout -- as anyone who's visited the University of Texas location can attest. While the menu offers typical pub fare, Kerbey also makes what many locals agree is the "Best Queso in Austin," and there's an obvious reason for that: there's guacamole on the bottom. As a restaurant, it feels very dive-y, which is part of the charm: Kerbey Lane is not "fancy" by any means, but the queso is worth the trip.
Multiple locations, including: 2606 Guadalupe Street, Austin

4. Bison Burger at Magnolia CafÃ©
SoCo (short for "South Congress") is one of Austin's best neighborhoods for food, and further south down on the main drag (past Allen's Boots and Guero's) is the Magnolia Cafe, a 24-hour breakfast joint that feels like a typical Austin diner (they have a sign that says, "Sorry, We're Open"). Magnolia makes an incredible Bison Burger (no meat-eater's trip to Austin is complete without a taste of bison) in an environment that's equal parts Breaking Bad and Haight-Ashbury. Sit and read about cool bands in the The Austin Chronicle while digging into a juicy burger -- chipotle mayo optional.
Magnolia CafÃ© South, 1920 S. Congress Ave, Austin

5. El Presidente at GÃ¼ero's
GÃ¼ero's is hands down the most talked-about taco/Mexican joint in Austin, and it's with good reason: the food is excellent and the people watching during SXSW might be even better (where else will you catch everyone from Ryan Gosling to Quentin Tarentino tucking into a bowl of guac?). Getting the "El Presidente" (which is famously what Bill Clinton orders when he's there) is also a right of passage. The meal includes one chicken taco, one beef taco, one tamale, and all the fixings.
Guero's Taco Bar, 1412 S. Congress Ave, Austin

6. "Trailer Trashy Tacos" at Torchy's Tacos (And Basically EVERY Taco at Torchy's)
Torchy's and GÃ¼ero's tend to drum up local allegiances but here at PAPER, we don't like to play favorites. Torchy's does a fried avocado taco that's good enough to make a grown woman cry (and upon eating it, this one did), and they have amazing jazzy menu titles like "The Dirty Sanchez" (scrambled eggs with fried poblano chile, guac, and escabeche carrots), "The Democrat" (beef barbacoa, avocado, and queso fresco), and "The Republican" (grilled jalapeno sausage and pico de gallo). They also offer the endearing option to make your taco "trashy" by removing the lettuce and adding more queso.
Multiple Locations, including: 1311 South 1st St., Austin

7. Migas Tacos and Aguas Frescas at Veracruz All Natural Food Truck
Migas is a super important southwest vegetable-egg-cheese-tortilla chip omelet-y concoction that's a very particular dish you can only find in distinct border states near Mexico. Veracruz has not only the best migas in Austin, but also the best migas anywhere. Period. They also offer aguas frescas ranging from mango and pineapple to the less expected strawberry and cantaloupe, which we highly recommend trying as a counterpart to the spicy migas.
Veracruz All Natural Food Truck at 1704 E Cesar Chavez St, Austin

8. Margaritas at Fonda San Miguel
Fonda San Miguel makes what is likely the best margarita in Austin, and they do it in style: the Art Deco-esque villa looks like a palatial pueblo of yore, serving Mexican staples like ceviches, sopecitos, and torre de botanas alongside the expected mix of tacos, quesadillas, and chile relleno -- but back to the margaritas: they make theirs with watermelon that's infused with Patron Silver, Cointreau, and fresh lime juice that can't be beat. Fonda San Miguel's was also named one of America's 50 Best Mexican Restaurants -- the perfect place for a leisurely happy hour fix before launching into a night of concerts.
Fonda San Miguel's, 2330 W. North Loop Blvd, Austin

9. BBQ at Franklin (Or The Salt Lick, If You Have A Car)
Any list would be incomplete without mention of BBQ, and Franklin's is THE BBQ hot spot in East Austin -- the part of the city that feels like a cross between LA and New Orleans. Franklin's is famous not only because it's super good -- from the brisket, ribs, and fatty tips to the pickles and coleslaw, they "do it right" -- but also because their wares are hard to come by: it's only open until they run out of food, making it something of a mythical treat (sort of like a cronut in New York City, only the wait feels less gimmicky).

For people who have cars or friends with cars, it's also worth the 15-minute trip outside the city to The Salt Lick, which is one of those huge in-the-ground BBQ joints out in Texas Hill Country. The only downside to the Driftwood hotspot (which is beautiful in the spring) is that it's cash only. Nevertheless, Salt Lick is a great place to go with friends if you feel like lounging and drinking sweet tea in a smoky open-air tent. (And if you can't make it out, they also have a location in the Austin-Bergstrom Airport...just sayin'.)
Franklin Barbecue, 900 E. 11th St. Austin
The Salt Lick, 18300 FM 1826, Driftwood

10. Fruit Smoothies at Juiceland
It's very easy to mock "juice culture" in the year of #healthgoth, but Juiceland makes some of the best, cooling smoothies this side of the Mississippi. They take advantage of the local produce scene and use unexpected ingredients like Spanish parsley (try the "Tiger Lily") and rosewater (which is mixed with watermelon in the "Rosie Cheek") to make what they call "next-level juices." You can expect to find lots of Southwestern flavors, like in the "Mango Habanero" -- the only smoothie that fetches truckers and cowboys alongside vegan moms and paleo-athletes that pack the storefront on Burnet Road (they also have a foodtruck in SoCo). When it comes to recovering from the chaos, hangovers, BBQ- and taco-overload that necessarily comes with SXSW, this place can't be beat.
Multiple locations, including: 2601 E. Cesar Chavez, Austin

RELATED: The 10 Music Acts You Shouldn't Miss at SXSW