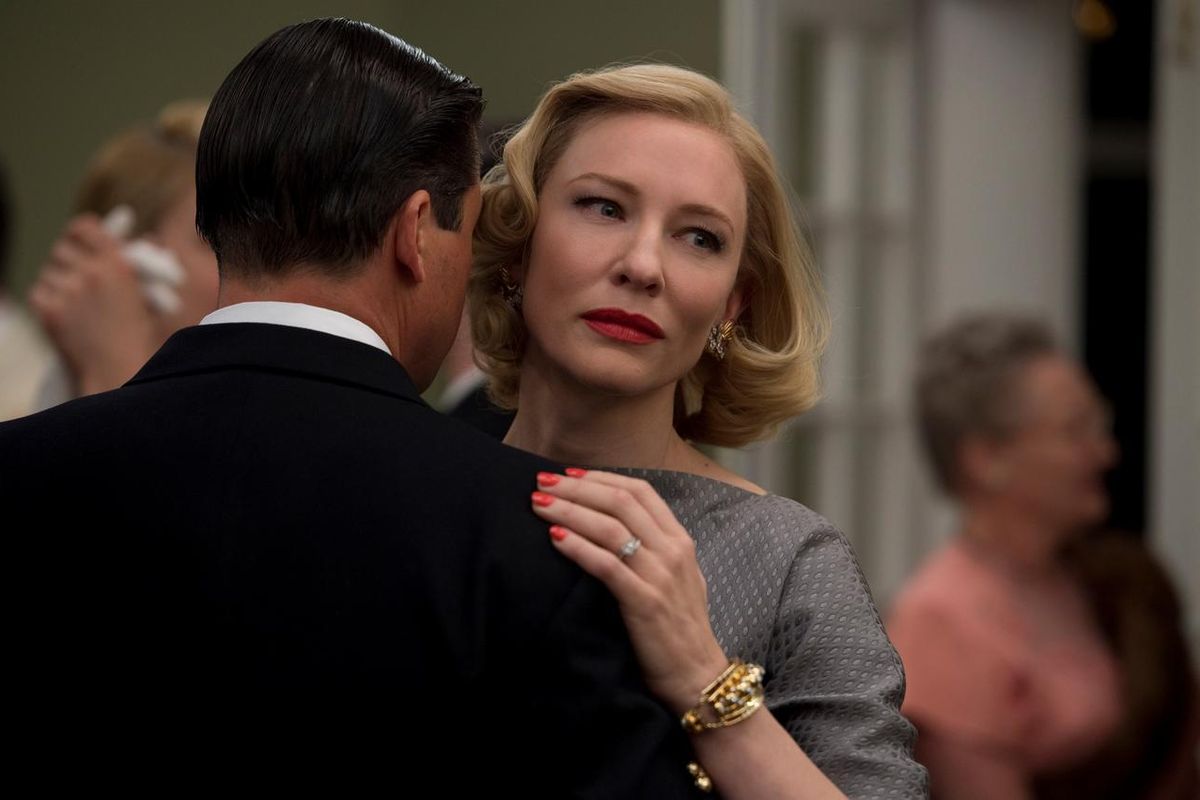 Dennis Dermody on the schlock and the sublime of 2015.

A truly sublime movie from one of my favorite directors -- Todd Haynes. Based on a Patricia Highsmith book starring a radiant Rooney Mara playing an aspiring photographer in 1950s New York working in a department store who enters into an affair with a beautiful, wealthy, mysterious, older woman Carol (Cate Blanchett). Haynes' film casts its spell from the first frame to the heart clutching finale.

This wickedly funny film by Damian Szifron consists of six twisted tales of revenge. The film covers everything from road rage to a group of strangers on a plane who frighteningly realize that they all have one person in common. A sardonic bitch slap of a film.

Charlie Kaufman's blissfully strange, mind-melting new film based on his "radio play" about the tragic inner life of Michael (David Thewlis), a depressed husband and dad who writes books on customer service with titles like How May I Help You Help Them. He's flown into Cincinnati for a speaking engagement and falls for an odd sales rep named Lisa (Jennifer Jason Leigh). Imagine Jean-Paul Sartre's Nausea with stop motion animated puppets. It's often incredibly funny and also cosmically moving too.

David Robert Mitchell's genuinely frightening film about a 19-year-old girl in Michigan (Maika Monroe) whose sexual tryst with a stranger result in the passing of an awful curse in which she's pursued by nightmarish ghostly figures trying to kill her. Gorgeous looking in an early John Carpenter way and wonderfully creepy.

Juliette Binoche is just sensational as an international film star Maria Enders being coerced to star in a revival of a play that started her career. Kristen Stewart is astonishing as her devoted assistant trying to get Maria through this trying time and their relationship is messy and fascinating. Director Olivier Assayas's film is exhilarating as it is mysterious.

A hilariously tawdry tale of two fierce transgender prostitutes (& best friends) on Christmas Eve in L.A. directed with high energy and poignancy by Sean Baker shot on an iPhone. James Ransone is fabulously funny as a pimp boyfriend. Just terrific.

An artful, prismatic, take on the life of fashion designer Yves Saint Laurent (played with beautiful intensity by Gaspard Ulliel) who revolutionized women's fashion. If you're looking for a linear biopic forget it, however the movie's fractured narrative casts a hypnotic spell. Directed with great style by Bertrand Bonello.

Deliciously macabre film, skillfully directed by Veronica Franz and Severin Fiala, about twin 9 year-olds (Elias & Lukas Schwarz) spending an idyllic summer until their mom (Susanne Wuest) comes home from the hospital with her head bandaged and the two become convinced she is not their real mother. What follows is deeply unsettling. You'll never look at Crazy Glue the same again.

Sensational documentary by Crystal Moselle about the Angulo family, living on the Lower East Side, whose tyrannical father has banned his 7 kids (6 boys and one small daughter) from leaving their apartment. So the siblings form a magical world out of their movie rentals (particularly Quentin Tarantino films), even re-enacting what they have seen with homemade props and costumes.

Less talking, more stripping. The whole movie was a 'bro yak fest. I didn't pay to see "My Dinner With Mike". Really- how could they have fucked this one up?

Trust me, there was nothing remotely fantastic about this. Except for the fact that there were only 4 people in the theater I saw this in.

I actually really liked the first two films (sure they're sick but kind of fabulous in a way) but this is so shrill, aggravating, and in your face stupid that you want to scream.

Believe it or not this was actually a really terrific book about a Russian cop linking these random deaths to a serial killer. But everyone in this cast (including lead Tom Hardy) is speaking in an idiotic Boris & Natasha accent, and the movie is just too lethargic to be involving.

I had high expectations. What's not to like about a movie with a bunch of teachers killing a school full of infected cannibalistic children? But this was too obvious and unfunny.

That was a sentiment I kept wishing watching this Australian Tarantino-wanna-be about a botched contract hit. Although I give credit to a movie that makes Simon Pegg so utterly unlikable on screen.

The whole first half is so whimsical you could vomit but then when he (Joseph Gordon-Levitt as Philippe Petit) steps off the wire between the two World Trade Towers in 3D you really do puke.

The movie that made everyone who enjoyed the TV series feel mortified and ashamed of themselves. Way to go.