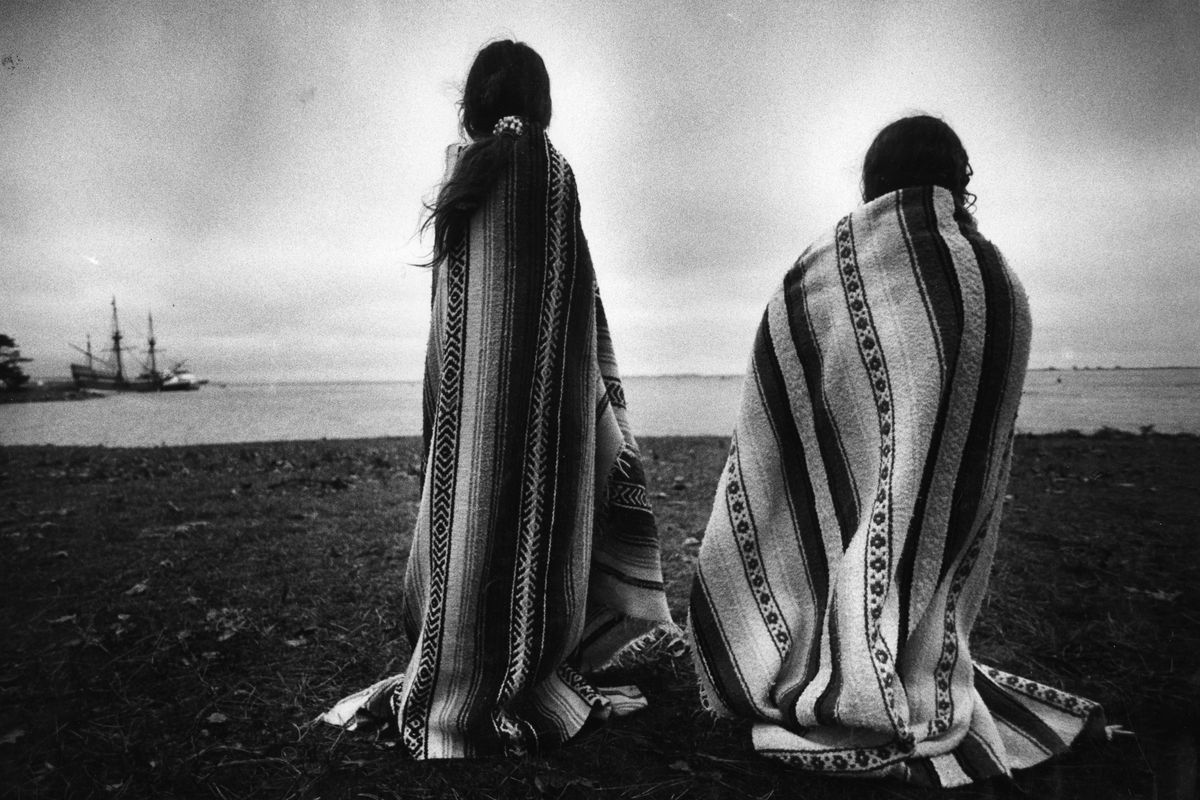 Thanksgiving: The National Day of Mourning

Allen Salway is a 20-year-old Diné, Oglala Lakota, Tohono O'odham student, writer and community organizer from the Navajo Nation. You can follow him on Instagram and Twitter.

Being a young, Native person in America during October to late-November is complete mental exhaustion. This time of year in particular, society continuously pushes us into oppressive climates where we are gaslighted through a series of holidays that either reimagine history, play on and exploit painful stereotypes, or both.

Columbus Day dresses up the genocide of our people as 'civilizing us,' Halloween perpetuates the stereotypical "Indian," and the worst yet is Thanksgiving: the most nationalized, white-washed version of history ever to happen to a marginalized group. On top of the very real, everyday problems Natives currently still face, like living without running water or electricity, respected national institutions readily erase our history on this holiday. They mock us by wearing brown shirts to mimic our skin, using us in their plays and crafting sacred cultural items — like dream-catchers and headdresses — for classroom festivities.

Bear in mind, we Native Americans were prohibited from practicing our own culture until just under 40 years ago. But still, schools take aspects of our culture and distort them for fun and offensive activities, in the name of teaching 'history.' I've witnessed, for instance, schools allow students to make up their very own 'Indian name' (which by the way, was a special ceremony for me conducted by a Medicine Man and Woman).

These practices are extremely detrimental to Native youth because it effectively teaches us that the blatant racism against us is acceptable and allows a highly negative representation of our culture to be portrayed in the media. This also has a lot of negative impacts, furthered by the way the U.S. government treats us as a demographic.

I want to highlight the recent incident in North Dakota where Natives lost their right to vote (reminder that we were also the last to receive it). Natives are also exposed to mass amounts of racism during the first year of our Western educational journey (pre-k), which has been normalized for so long that even my parents had a hard time pin-pointing it. I myself was usually the only Native student enrolled and was put into school plays where I was given the role of the 'happy Native boy bringing food to share with the Pilgrims,' followed by a feast where we give 'thanks' and come together as one. In reality, the actual history behind Thanksgiving day is dark and twisted.

"To me, Thanksgiving is a reminder of our resistance as Indigenous People navigating this settler society that continuously tries to erase and destroy us, yet we are still here."

In 1637 the Pequot Massacre took place, when over 700 Indigenous men, women and children were slaughtered in what's now known as Mystic, Connecticut. The following day, the governor declared a day of thanksgiving and held a feast to celebrate their victories in battle. Thirty-nine years later in Massachusetts, the colonists declared a "day of public celebration and thanksgiving" saying, "there now scarce remains a name or family of them [Natives] but are either slain, captivated or fled," right after the slaughtering of a tribe including the beheading of Wampanoag chief Metacom (which remained on display for 25 years after King Philip's war). It was not until 1863 that Abraham Lincoln officially declared it a national holiday, in the same year the Sioux were being removed from Minnesota, during which the bounty for a Sioux scalp was $25.

This holiday can be sugar-coated as much as people like to justify colonial violence, but note that it is a painful, annual reminder of our genocide and white supremacy — two of the very foundations of this country, alongside slavery. This day is viewed as the National Day of Mourning by several Native communities, which was started as a protest in 1970 — organized by the United American Indians of New England (UAINE) to honor our ancestors and highlight the struggles they endured then to modern times, as well as the acknowledgement of the racism and oppression experienced today.

To me, Thanksgiving is a reminder of our resistance as Indigenous People navigating this settler society that continuously tries to erase and destroy us, yet we are still here. I will spend it feasting and honoring my ancestors, and our collective fight for survival and freedom. However, for many Americans, they will spend Thanksgiving watching the Cowboys vs. Redskins (ironic) football game — another way for the sports entertainment industry to mock our genocide, while drinking beer that steals water from Indigenous communities and eating turkey: a sacred animal within many tribes that isn't supposed to be consumed. This will happen in their sheltered homes, with them sitting comfortably with the idea that this 'holiday' is a time to be grateful for what you have (again, ironic as most splash out on the Black Friday sales) alongside their close and distant family.

But here are some things you can do if you're able and willing to help progress from the dangerous illusion of Thanksgiving. Click here to directly support Black and/or Native children, women and communities. This also contains links to help causes such as bringing water and light to the Navajo reservation, while also informing you of which tribe's land you are currently situated.

Also donate here to give back to the Wampanoag tribe — one of the first tribes to make contact with the colonizers who are often left out of today's conversations, but are still being attacked by the government to this day. Note that all of these issues we face are connected and tied to white supremacy, capitalism and genocide. We must continue to look out and care for one another, and provide true mutual aid in and out of our communities. It's the only way forward.

Update 11/25/20: This article has been updated by Allen Salway to include additional, updated resources.