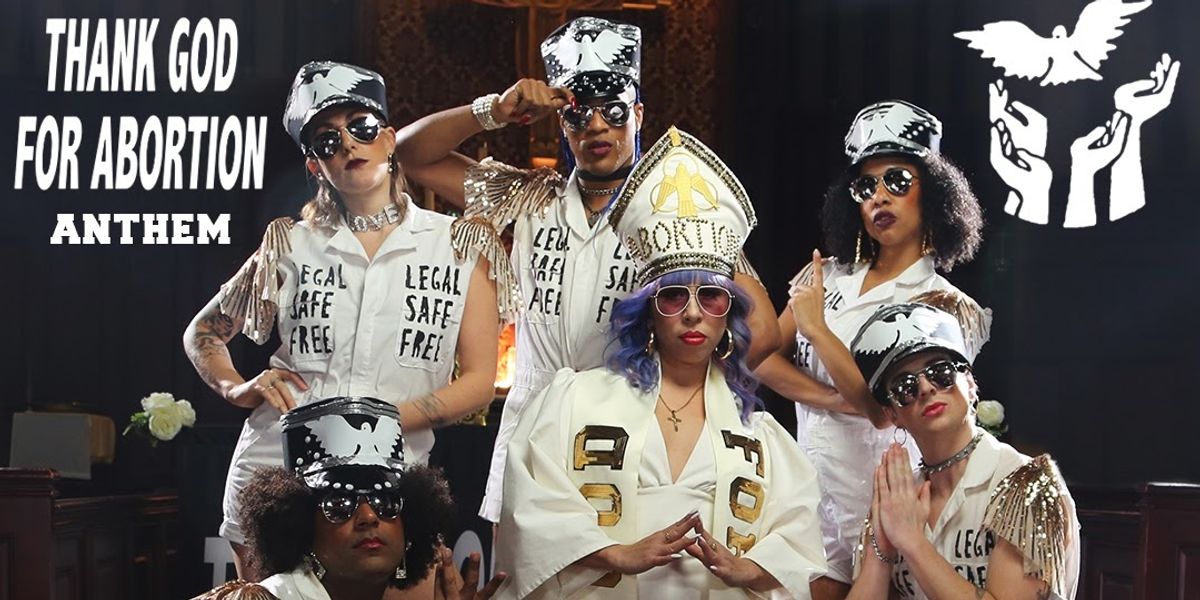 Last week, Thank God for Abortion — a collective activism initiative, though founded by Ruiz, who is currently an artist-in-residence at Shout Your Abortion — released an eponymous anthem. It's an electro-reggaeton track that, combined with its video, leaves little unspoken, connecting the dots between various oppressions. 100% of Bandcamp proceeds will benefit the Abortion Care Network.

Equality applies to everyone — at least, that's how it should be. Anti-choice ideology and anti-racist activism cannot coexist. Being pro-LGBTQIA+ rights voids anti-Blackness. Indigenous rights means you're pro-trans, too. If you're pro-choice, you must recognize that Black, Indigenous, and POC, and that includes trans and GNC folks, don't have the same access to reproductive healthcare as white cisgender women.

Those who don't understand the aforementioned, as Ruiz chants in the song, need to "get with it."

Still, TGFA's most conspicuous message — that religion and abortion rights can co-exist, that neither nullifies the other — is probably the most polemic.

Ruiz confronts the elephant in the room that is religion in the fight for reproductive justice. This absolutely incenses many on the right. Supreme Court Justice nominee Amy Coney Barrett certainly wouldn't like it.

Yet here is Ruiz, dressed as the Pope, inside a church, dancing alongside other activists before pews filled newly converted, former staunch conservatives. The video's setting nods subtly to Mariah Carey's 1991 clip for "Make it Happen." However, with all the choreo, the glam, the glitter, the looks, "Thank God for Abortion Anthem" is something else altogether.

Ruiz wants to end the stigma of abortion entirely. "Even people who have never claimed a religion are shocked [by the message]. They feel like there needs to be some kind of gravity whenever you talk about abortion," she says.

But even for progressives, the ideology Ruiz pushes presents a conundrum. The colonialist, white supremacist patriarchy under which we live has much to do with requiring that shame, sadness, and guilt be attached to abortions, Ruiz adds. And this is bullshit.

"When I had two abortions, I was shocked that I did not feel terrible," she says. "I mean, I had feelings about it, but it wasn't like what they said it was."

A New Yorker of Ecuadorian descent, Ruiz was indoctrinated into Catholicism at a young age, but later self-proselytized to intersectional feminism. She spent years as a stripper and working in nightlife. She remains a spiritual person who believes strongly in a higher power.

For so many people, that doesn't track.

The reality is, though, that 48 percent of U.S. citizens are pro-choice. Another fact: Two-thirds of Americans consider themselves religious. But how many of those in the overlap are unsettled by the Thank God for Abortion campaign?

Nearly 12,000 people are okay with it — if we're factoring in TGFA's Instagram followers, anyway.

The beginnings of Thank God for Abortion date back to a 2015 T-shirt sold at an artist market organized by Ladyfag. During this time, Ruiz notes, a lot of clinics and providers were being shut down by laws pushed forth by the anti-choice right. Circumventing Roe v Wade by requiring arbitrary hallway measurements and specific minimum distances to hospitals in case of emergency was smart, she notes, albeit total nonsense. (On the latter: The medical risks associated with abortion are few; giving birth is, in fact, more dangerous.)

Holding down her booth at the market, where abortion and religion were brazenly, blatantly connected, Ruiz says, "People didn't even want to stand next to the words. It was like it was going to contaminate them."

The discomfort she saw there isn't the only confirmation Ruiz found for her mission. Some saw this in her own family, too.

"My brothers thought they were on my side because they were gay but they weren't, because they condemned me for my abortion," she says. "But in that weird liberal way where, fine, I could have it — but not be happy about it, or talk about it [openly]."

Another familial discussion about abortion gave her hope, though. A close relative of Ruiz's confirmed quite casually — at a barbecue, she recalls with a laugh — that she'd had multiple abortions. In those experiences, Ruiz saw an opportunity to humanize abortion to her aunt, a person with a very conditional outlook on abortion rights.

"I was like, but Tía, would you condemn her? And of course she couldn't," Ruiz says. "I think that [is the] deprogramming space: to humanize who you're condemning."

She points to We Testify, an org that encourages abortion storytellers for that very purpose. "Everyone loves someone who had an abortion," its founder Renee Bracey Sherman has said.

Ruiz also looks to SisterSong, the long-established, Black woman-led reproductive justice org, for guidance and leadership for TGFA's work, as well as the activism of Black trans women and indigenous groups.

But Ruiz combines her education with her own instincts, too.

In 2018, the group paraded through NYC Pride on a black float brandished with huge Thank God for Abortion Lettering. It was a scandal, she says.

Not even the LGBTQIA+ community is totally on board with Ruiz. Some folks don't even realize that queer and trans folks are part of the reproductive justice conversation, too. (Hello? It's not only cisgender women who get abortions.)

Ruiz presses on, though. And she will continue to do so even if Barrett is confirmed.

"That would be terrible if she's in there and they overturn Roe. And yet, and also, we just have to keep going. It's not a surprise white people are going to be playing with our lives — that's not new," she says.

Oddly enough, TGFA didn't release its anthem this week on purpose; it's pure coincidence that the video dropped amid Barrett's hearings.

The video was actually filmed in February, but Ruiz spent the subsequent months caring for her a ,relative who nearly died after contracting COVID-19 early in the pandemic. Her recovery was "miraculous," she says, but it's only in the past couple of months that Ruiz has begun to ease out of her caregiving role.

It's a happy kind of coincidence that the video debuted during this time. "Thank God for Abortion Anthem" is an "energetic counterpoint," she says.

That's quite the understatement, really. The video and TGFA's stance, in general, does more than just raise awareness for reproductive justice, obviously. TGFA is a confrontation, a demand to check all your privileges and how they've affected your worldview.

"It really can make people confront themselves," she says. "You don't really have my back right now if you need me to be quiet about [abortion.] I've seen people really get right once they saw themselves."

Even Ruiz herself says she could be "operating on misogyny, anti-Blackness" without knowing it. But she does know it.

"Once you know you have it, then you can be on the lookout for it. And people are going to tell you — and that's a gift," she says.