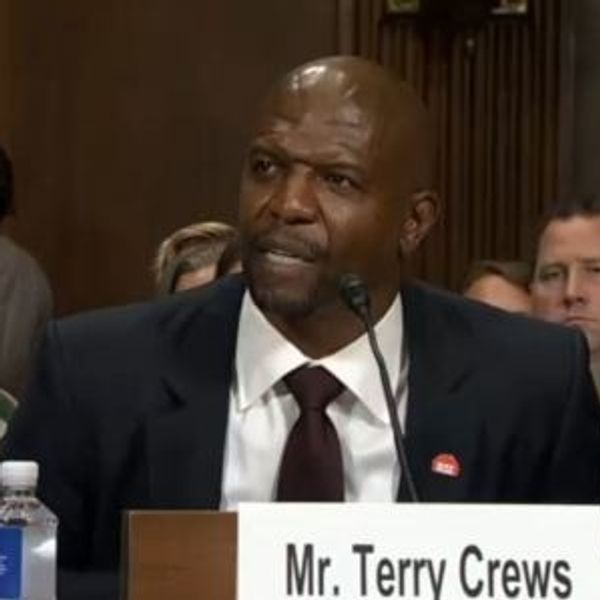 Terry Crews Testifies on Sexual Assault: 'This Happened to Me Too'

Terry Crews, one of the first high profiles men to come forward and identify himself a sexual assault survivor, testified before the Senate Judiciary Committee to advocate for the Sexual Assault Survivors' Bill of Rights.

The actor and former NFL linebacker detailed his own #MeToo story on Twitter after women took to social media to reveal their experiences with sexual assault or harassment in the wake of revelations of Harvey Weinstein's rampant abuse of women in Hollywood. Crews alleged that a powerful agent, Adam Venit, grabbed his genitals twice at an event in front of his wife. "He's basically staring at me and sticking his tongue out and just [doing] overtly sexual tongue moves," Crews told Good Morning America at the time. "I'm looking like, 'Is this a joke? I don't understand.'"

"This past year we have seen powerful men in Hollywood and elsewhere finally held accountable for sexual assault," said Crews in his opening statement to the Senate. "We also saw the backlash survivors faced coming forward. I wanted these survivors to know that I believed them, I supported them, and that this happened to me too."

Crews also recounted the uncomfortable and frustrating process of reporting his assault, claiming that while he was consistently reminded of his predator's rights, no one informed him of what he was entitled to as a survivor. "That was the wake-up call. I knew I had to be part of what was happening here today in regard to the Sexual Assault Survivor Bill of Rights. If you know what you can do, you can actually do something about it."

The Sexual Assault Survivors' Bill of Rights would require a standardized process for sexual assault reporters; in addition, rape kits would be preserved and forensic testing subsidized across every state.

The Brooklyn Nine-Nine star also shared his thoughts on the "toxic masculinity" pervading our culture. He told the Senate he grew up watching his father violently abuse his mother, and that he himself went on to treat women (and their images) as he pleased to validate his own masculinity—at times preventing women from speaking about their lives so they wouldn't be humanized in his eyes.

"I'm not a small or insecure man but in that moment and in the time that followed I've never felt more emasculated," Crews said before explaining his reaction to watching woman after woman come forward to reveal their assaults, especially as a man with a massive platform: "This shame washed over me again and again and I knew I had to act."

Crews claimed his actions had spurred "thousands" of men to reach out to him directly with similar stories. "I sit here before you just as an example because a lot of people don't believe that a person like me could actually be victimized, and what happened to me has happened to many, many other men in Hollywood, and since I came forward with my story I've had thousands and thousands of men come to me and say, 'Me too—this is my story.'"

This past year, we have seen powerful men in Hollywood and elsewhere finally held accountable for sexual harassment and assault. We also saw the backlash survivors faced after coming forward. I wanted these survivors to know that I believed them, I supported them, and that this happened to me too.

This encouraged me to come forward with my own experience, and reflect on the cult of "toxic masculinity" that exists in our society. As a child I watched as my father violently abused my mother, using his power and authority to dominate her. All I could think was how I wanted to protect her. How, if I get strong, I can protect her from this living nightmare.

As I grew up, this thought transformed the type of man I became. I swore I would never be like my father and yet I believed, to my core, that as a man, I was more valuable in this world. As a protector and symbol of strength, I was more worthy. That women were beneath me.

I used images of women's body and pornography at my disposal, validating my need for control. I often cut women short of sharing personal details of their lives so they would seem less human, less real. As a man, I was taught my entire life that I must control the world. So, I used power, influence and control to dominate every situation: from the football field to the film set, even in my own home with my wife and children.

Then, in 2016 while at a party with my wife, I was sexually assaulted by a successful Hollywood agent. The assault lasted only minutes, but what he was effectively telling me while he held my genitals in his hand was that he held the power. That he was in control.

This is how toxic masculinity permeates culture. As I shared my story, I was told over and over that this was not abuse. This was just a joke. This was just horseplay. But I can say one man's horseplay is another man's humiliation. And I chose to tell my story and share my experience to stand in solidarity with millions of other survivors around the world. That I know how hard it is to come forward, I know the shame associated with the assault. It happened to me.

I'm not a small or insecure man, but in that moment, and in this time following, I've never felt more emasculated. As I watched women and colleagues in my industry come forward to share their #MeToo stories, this shame washed over me again and I knew I needed to act. I am honored to use my platform and story to help create additional civil rights protections for survivors across the nation under the Sexual Assault Survivors' Bill of Rights.

This is why I sit here today with Amanda Nguyen and the Rise team. Every man, woman and child deserves to be seen as equal under the law. The Sexual Assault Survivors' Bill of Rights does just that by recognizing survivors' basic civil rights. While we can call attention to a culture of toxic masculinity and the need to disrupt power dynamics, this bill creates long-term change and gives power and control back to survivors. All survivors must be protected and this bill must be enacted in all fifty states. Thank you.