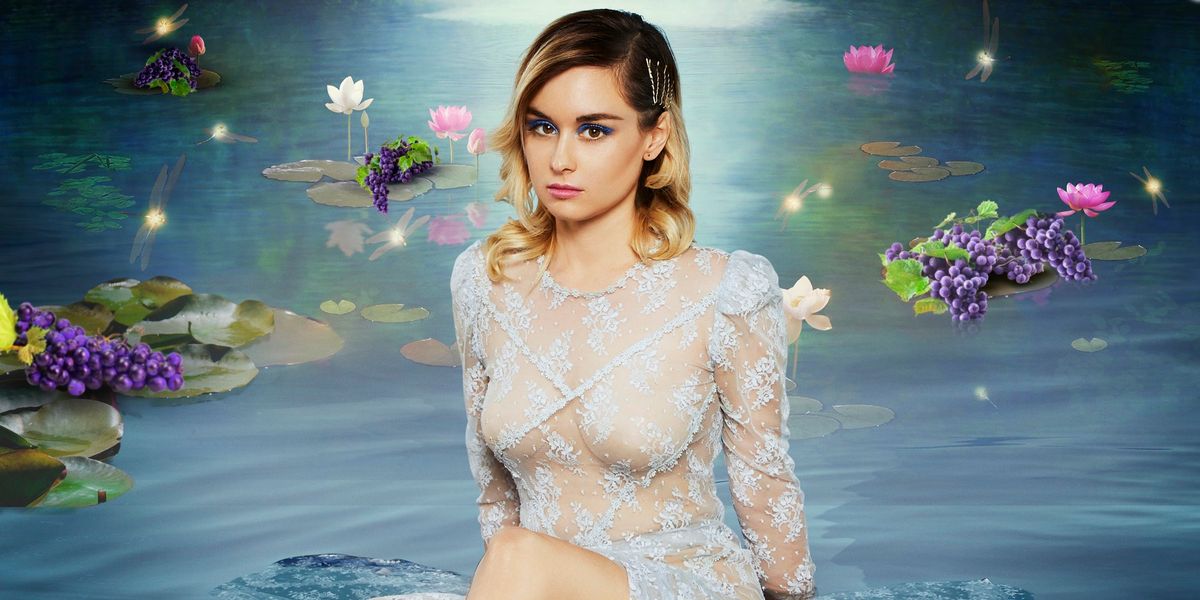 The steady pop drip-feed of pop songs coaching women to love their bodies, feel confident and be themselves, can get... exhausting. Especially when society isn't necessarily becoming any more conducive to these revelations. With this in mind, indie pop mystery act Terror Jr's new song "Pretty" — the first single off their debut album, Unfortunately, Terror Jr — and it's dark, contemptuous take on the ennui of living in a female body, feels refreshing and rebellious.

"Gold chains and blood stains/ Good girls cover their shame" riffs Lisa Vitale aka Ms. Terror on top of an eerily delicate melody and staccato drum machines. Pouting in a prom dress, she spouts brutal lyrics in her airy falsetto about medicating doubt and dead-eyed smiles, questioning if anyone will love her when she's older. She's a barbie-doll-prom-queen cartoon in "Pretty"s psycho-thriller music video, which watches like the mash-up of The Shining and Botched b-roll, as a surgeon picks out a new face for a little girl, while a botoxed older woman strokes a fluffy white cat.

In the form of a dark, cinematic spoof, "Pretty" sheds the banalities of the cloying political bop canon, most of all in the chorus's condemning conclusion: "Oooh, she's insecure/ But she's got money in her pores/ Oooh, we'll never find a cure/ Why should we pretend anymore?"

"It's painful chasing something that inherently can't last... But we all do it... And we shame ourselves for it... The never-ending cycle of vanity and fuckery... Rinse and repeat" explains Terror Jr.

Rather than a tedious empowerment banger futilely aspiring to shatter toxic beauty standards, "Pretty" makes its mark by acknowledging their violent, ongoing reality. The stinging lyrics, juxtaposed with the band's signature bubblegum sound, perfectly capture the nauseous nightmare of living in a sexist society, that then turns around and punishes women for revealing shame or insecurity. It's dark, delicious and a breath of fresh air from the saccharine picture painted by Dove and Nike girl power ad campaigns, which slap a band aid on a cancer and call it a day.

It's the teeniest bit ironic that Terror Jr, a band most of us learned about because of a rumor they were fronted by Kylie Jenner, has started to make this political insurgency their pop niche. This isn't the first time the group has waded into cultural commentary, but "Pretty" is their freshest and most iconoclastic statement to date.

Check it out, below, and stay tuned for Unfortunately, Terror Jr due January 25.