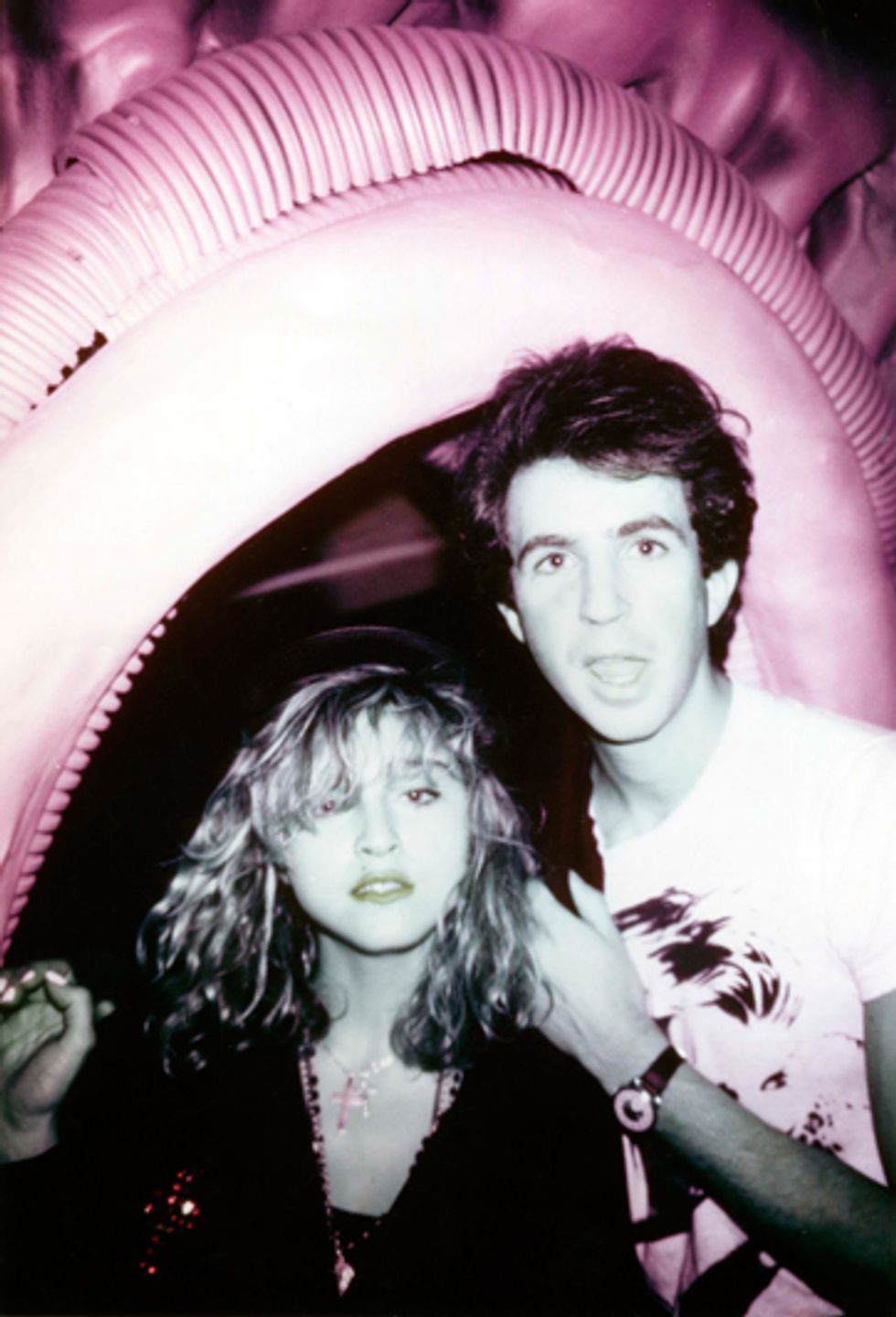 A nightclub without a fab owner and/or promoter is just a space with some people in it. The people that run the place and draw the crowds have to be magnetic, colorful, and professional enough that you'll want to go to their events more than once -- and they should considerably add to the party, not just sit at their registers, counting the cash. Here are some of the more memorable impresarios from the olden days of NYC nightlife:

[Photo via]
STEVE RUBELL
The Brooklyn-born Rubell was the personality behind the legendary Studio 54, the ultimate '70s disco, which he co-owned with spark and aplomb. The doorman was a snoot, but Rubell loved press, so he'd spot me in the outdoor throng, pull me in, and tell me which superstars were scheduled to show up that night. Rubell also co-owned the '80s megaclub the Palladium, by which point he was still spunky, but in a somewhat mellower tone, having been through ups and downs (and prison for tax evasion). He died of AIDS in 1989, leaving a legacy of good-time thump-thumping.

Eric Goode with Madonna. [Photo via]
ERIC GOODE
The Rhode Island-born conservationist made a splash by joining with his brother and some other partners to open Area, the art-drenched '80s club which changed its theme every five weeks, doing so with elaborate motifs and real artistic vision. Eric was always a lanky charmer, who seemed a little out of place in such a wild and woolly venue, but he brought heart and soul to it, going on to create B Bar and take over Bowery Hotel.

[Photo via]
RUDOLF PIPER
The German club god helped bring us the legendary, multi-floor rock club Danceteria, about which he aptly said, "That place had an un-fucking-believable magic." With busty "It girl" Dianne Brill on his arm, Rudolf was always affable, witty, and aware of the larger artistic issues that drove a late-night good time. He's currently working his magic in Brazil.

STEVEN GREENBERG
A rotund man with white hair, Steve was called "Ben Franklin" by many people -- well, by me, anyway. He made his fortune on Wall Street and he went on to use it by opening the Roxy, co-owning the Palladium, and partnering on the Gramercy Park Hotel. Greenberg also owned the rooftop at 230-Fifth Avenue, where he threw a lavish 2010 party for me, hosted by Joan Rivers and Michael Urie. Greenberg pulled all the stops out with the booze and food, longing to play host to a bohemia-filled soiree that brought together different cultures -- and we truly delivered for him. He died in 2012 and decreed in his will that money from 230-Fifth should be funneled to NYC hospitals.

[Photo via]
MICHAEL FESCO
From 1974 to 1981, Fesco owned the Flamingo, a private gay club on Broadway and Houston, which revelers remember with adoration. They cite the club's "stairway to heaven," the "sexy and subversive music" by DJs like Howard Merritt and Richie Rivera, and the theme parties, which foreshadowed gay circuit events. Fesco currently does "sea teas," taking his act to the river.

Larry Tee (center) and Lahoma Von Zandt (far right) [Photo by Karmapix via]
LARRY TEE AND LAHOMA VON ZANDT
In 1989, up from Georgia came these two -- DJ Larry and drag star Lahoma -- and they created La Palace de Beaute, a fabulously frisky hangout named after a hair salon down South, at the Underground space. Their style was kitschy and their approach was freewheeling as they brought on future stars like RuPaul (and themselves) to entertain the drunken masses. Larry now splits his time between Berlin, London and NYC while Lahoma (Jon Witherspoon) has left drag to pursue a saner lifestyle.

BOBBY BRADLEY
In 1981, Bradley and two other ex employees from the dance club Interferon opened the intimate, amazing Pyramid on Avenue A. With his easygoing manner and drawl, Bradley hid a real lust for performance, as he encouraged players like John Kelly and Ethyl Eichelberger and booked John Jesurun's weekly serial Chang in a Void Moon. According to Iris Rose's history of the club, Bradley was getting hooked on drugs as time went on, and some of the Pyramid's performers were even getting paid in coke! In 1984, he was ousted and he later passed on of AIDS, but I still remember his friendly glow.

[Photo by Alexis Di Biasio via]
LEE CHAPPELL
The Roxy (the former roller skating palace on West 18th Street) had become a live music venue called 10-18, but then it was the Roxy again, and in 1990, the weekly "Locomotion" event made it faboo, with all sorts of interesting gays, drag queens, and clubbies. The event was co-promoted by Lee Chappell and the almost as flamboyant David Leigh, who designed and made the dÃ©cor (with a team), hired the DJs and performers, and handled every other detail through 1991. (Around Pride of '91, John Blair started bringing in swarms of shirtless gym bunnies, and that made the mix even more eye popping.) Lee always dressed up extravagantly and had the manners to match. He's gone on to many other venues and events, like the Drip pool party at the Grace Hotel, a real splash, which won the Glam award for Best Event in 2009. He makes nightlife grand.

JOHN CONTINI
Brooklyn-born Contini was a longtime constant on the scene, offering wisdom and charm at a variety of venues. I'll let him tell you a capsule version of his nightlife credits, since they span the sweep of several decades of frolic:

"I started promoting for Steve Rubell and Ian Schrager at Enchanted Garden in Queens. I re-opened Le Jardin as Jouissance in September 1976. I kept it open for a year and then made a deal with Maurice Brahms to take over the promotion of Infinity, in return for a 10% stake in the club. It was a huge success until it burned down on 2/14/79. It took three of my partners at Infinity and two others a year to build and open the Underground (2/28/80). I gave John Blair his start there, among others. In October of '80, we were hit with a tax evasion lawsuit from Infinity. This came from Steve and Ian, who were already in jail for the same reason from Studio. Maurice and another partner from Infinity, but not Underground, went to jail for several years and I sold my interest at Underground and filed back taxes. I went to work on Wall Street, promoted a few parties -- including the Pretty Preppy Party at the Peppermint Lounge -- and laid low until I had a chance to open the Cat Club in '83. It opened two weeks after Area, but we were able to get an amazing crowd that loved to dance because of our wonderful dance show. Andy Warhol loved it there and had a private Halloween party there for his entire Factory staff and a few friends. Don Hill was the manager. I remained there for almost three years and at the same time started teaching at risk and homeless kids. In '86, after Maurice came out of jail and took over Underground again, he threw out his partners there and asked me to return to help him run it, which I did. I also went to law school at the same time. Maurice also opened Red Zone, which I worked the door at with Kenny Kenny and Aphrodite and turned Underground into La Palace de Beaute, which I had a hand in (but that was Steve Lewis' work). Maurice and I opened Peace, where Life opened a few years later. I also worked the VIP doors for the Palladium and Life when they opened. My last nightclub was Magnum in Soho 1996. It was an A-list lounge. Mark Ronson was the DJ on Wednesday nights and Dominic Chianese on the weekend. I stayed for a year until I decided that my other work with homeless kids was more important."

Also: Marc Berkley, Steven Cohen, and Rob Fernandez. (May they rest in peace.)