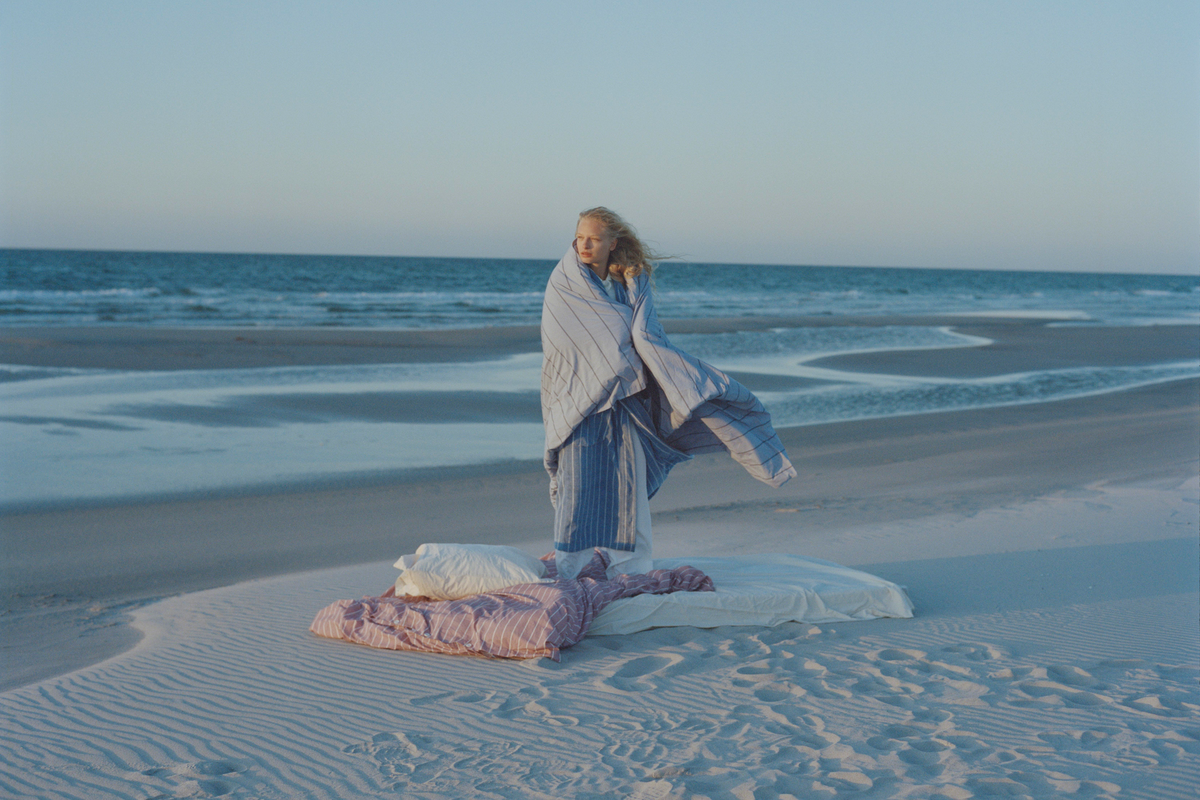 Escape to a Remote Island With This Danish Photobook

Since founding the home textiles brand Tekla in 2017, Charlie Hedin has developed his Copenhagen-based venture into one of the most aspirational lifestyle brands in Scandinavia. The elevated leisurewear, bedding and bath products are a hit with decor lovers, particularly those with an eye for clean, sustainable living.

Tekla's serene, architectural references are a nod to Hedin's Swedish fashion background, having co-founded cult sneaker label Eytys and worked at Acnes Studios for half a decade. Today, the brand released a new photobook that encapsulates Tekla's essence the best — a visual representation of its tranquil aesthetic and straightforward philosophy.

Titled "Sacred Places," the project was done in collaboration with photographer Philip Messman, who's been working with Tekla since its inception. It was shot in a tiny remote island called Anholt, situated between Sweden and Denmark and inhabited by only 150 people.

The images show Messman's partner Frederikke Sofie, a Danish model known for her past work with Celine, languidly posing around the island's shore and lighthouse, juxtaposed alongside still images of the beach and other serene outdoor settings.

"The book unfolds the photographer's idea of capturing the dream of a sacred place," Medin tells PAPER. "The nature is very unique, surrounded by reefs and shoals and most of the island consists of Scandinavia's biggest desert. We found this as a perfect place to shoot Sacred Places, places where you go when you want to escape, to feel content and it truly reflects the narrative of our brand and what we try to say."

PAPER spoke with photographer Philip Messman about the process and concept behind the photobook. Read what he had to share, below.

What were some of your inspirations that influenced the photography in "Sacred Places"?

I've always been inspired by the sea and its surrounding elements. The ever-changing weather by the ocean occurs to me as organic backdrops in constant movement. Nature sets and decides the mood for the image at the given moment, which I appreciate every time. Being close to the ocean never fails to inspire me. Our location for the book is one of the most isolated islands in Denmark, therefore, it felt natural for this type of project.

The images don't focus so much on TEKLA products, but rather scenery shots and natural elements. Why is this?

The whole project had to be natural to us, so we were shooting more or less as if we were on a holiday, documenting a weekend, which essentially turned into. We stayed for three days, and the more time we spent, the more natural it felt to combine nature with Frederikke. Our location was an old lighthouse, which had so many fun and authentic little elements we could use for the shoot. Like old shoes, fishermen coats, hats and so on. It was never meant to be only about Tekla products, but rather to present a clear view of a sacred place, a place where we travel, fictional or real when we want to escape. To filter away from the city noise and come back to the serenity of nature and that I think is very much in line with what Tekla is as a brand.

What were some of your favorite memories from shooting that day?

The whole project of just getting there was an experience itself. Many hours in a car and then finally taking the ferry to the island. We stayed in a beautiful house 8 km to the nearest village, so we had to drive along the beach to get there as there were no roads. You get this feeling of total isolation, find yourself surrounded by nothing more than turquoise water and dunes. There was no electricity or reception in the house which meant everyone was present all the time. This created energy on the team that felt very special, which I believe is normally very hard to achieve. Everyone felt connected with each other as well as with nature and I will never forget that.

Sacred Places is available to purchase now on Teklafabrics.com, Claire de Rouen in London, OFR in Paris and other select retailers.