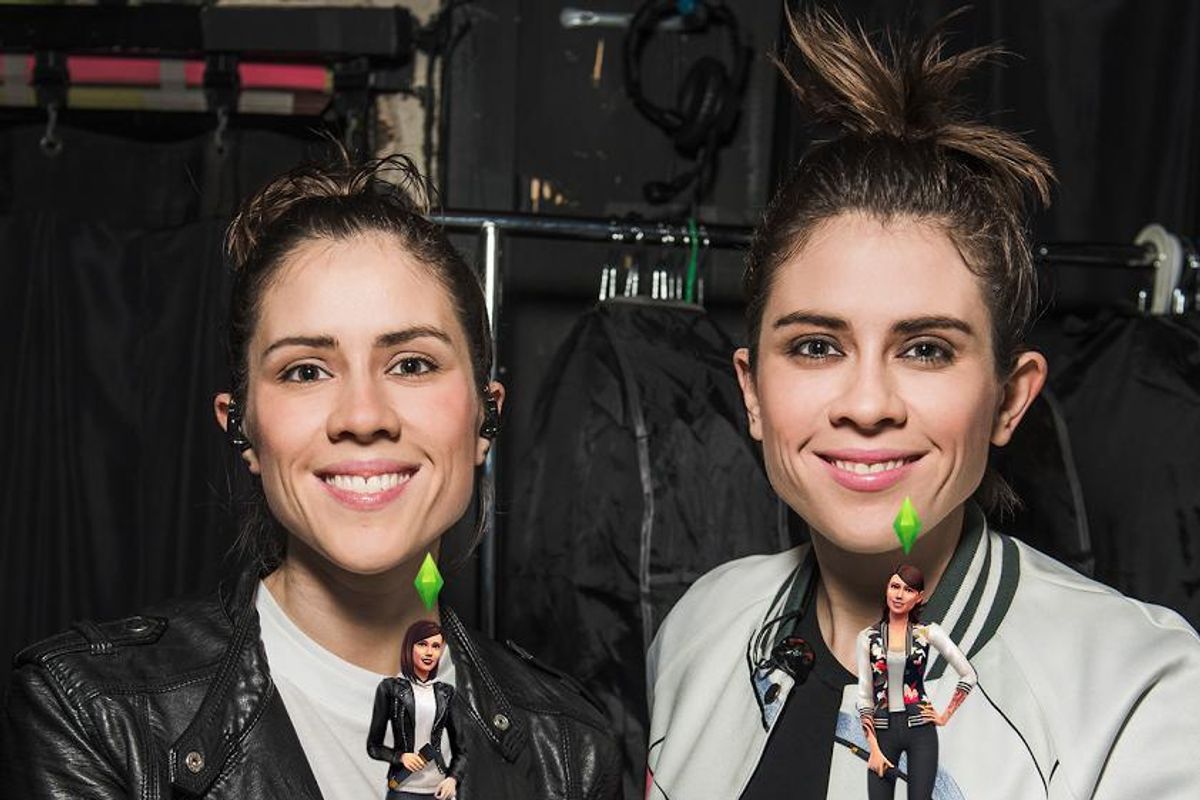 This week, The Sims 4 dropped its "City Living" expansion pack, and in addition to now being able to dunk a basketball and live in a high rise condo complex, your Sims can also turn on their stereos and listen to Tegan and Sara in their free time, just like you. That's because the Canadian pop duo are the latest to record one of their songs in the game's native language of Simlish.

For the uninitiated, Simlish is the language Sims have been speaking to one another for sixteen years now. When you click on another Sim within the game and direct your character to "flirt," or "chat," or "ask about day," they proudly stride up to their target and start speaking in garbled semi-words. Simlish has a lot of the same sounds as American English, but nothing signifies anything. In 2016, we're four games and dozens of expansion packs into the evolution of the Sims universe, so while EA Games (the company who produces The Sims) has never publicly released any information about Simlish linguistics, there are plenty of fan-made dictionaries out there trying to keep track of it all.

Recording a song for the game is a badge of pop credibility—previous Simlish pop stars include Katy Perry, Carly Rae Jepsen, and F.U.N.—so it makes sense that Tegan and Sara would appear on the expansion pack that enables you to leave the suburbs and head to a major urban center to explore your trend-driven millennial lifestyle; this includes a Simlish version of their glorious summer single "Stop Desire."

I recently caught up with Tegan to chat about the collaboration, and she said the idea to partner with EA Games came about after the pair saw how well fans responded to their song "Everything Is Awesome" for the Lego Movie soundtrack.

"We knew ["Stop Desire"] was going to be the next single and that it was a fan favorite," Tegan said. "Our hope was that it was fun and recognizable enough that it would bring joy to fans to hear it in Simlish, but also catchy enough that first time listeners would be drawn to the melody and high energy."

The process of recording a Simlish song is more involved than you'd think, too. Even though the words are technically meaningless, Tegan said EA has staffers responsible for keeping track of the ever-evolving vocabulary. "[Lyrics are] all worked out in advance. There are actual people who have created the language. Hundreds of words apparently! So they had it all worked out for me."

Singing nonsense lyrics to your own song gets a little tricker when that nonsense has to sound a certain way, though. "[It was] so hard!" she explained. "Everyone kept telling me that it was super simple and to just have fun! I was like... guys, this is hard! I don't know another language. So to my brain it was truly just gibberish!"

Confusing lyrics aside, EA let the duo work with the same mixer who produced the original version of "Stop Desire," which Tegan said was a huge plus. "It's got all the same effects, filters, EQ... I am so happy with how it turned out," she said. "Apparently I was more prepared than most people who come into the recording typically. I was really stressed about it sounding good. I hate wasting people's time. So I worked on it a lot leading up the recording, so I was somewhat fluent!"

Get The Sims 4 here.