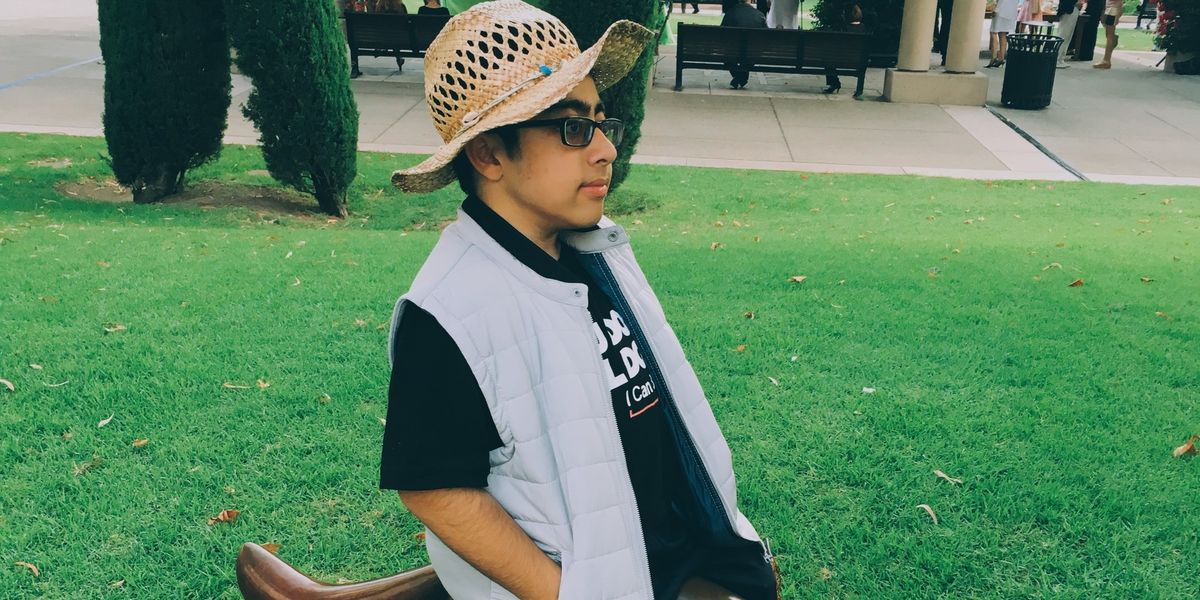 Nik "Big Nik" Keswani found fame in an unlikely place: Recovery. The now-17-year-old Southern Californian started making Vines in 2013 while he underwent a series of surgeries on his legs, hips and ankles. "That was probably the lowest point of my life. I was in so much pain," he recalls. Keswani was born with a rare form of dwarfism that left him blind in one eye due to retinal detachment, a condition common with this diagnosis. Though many people would be emotionally sidelined by this, Big Nik used his time post-surgery to make videos that made him laugh. It turns out, he wasn't the only one who found them funny. With 2.9 million followers on Vine (not to mention 1.3 billion loops), 100,000 YouTube subscribers, 250,000 Facebook fans, and a PEOPLE web series about his family, it's turned Keswani into a legitimate Internet star. These clips range from gleefully cursing in an empty house (his first official video) to more sophisticated 6-second stories about normal life struggles starring fellow Viners. PAPER called Big Nik to talk about the Vine that launched a billion loops, living in a social media dorm, and dealing with family affairs in the public eye.

When did you get started on Vine?

I started three years ago. I was really bored. I was in my wheelchair. I made a Vine one day and it blew up two months later.

Which Vine was this?

It was "When you're home alone and you just want to let loose." I just started swearing and turned it into a song. People thought that song was really catchy.

What made you want to use Vine in the first place?

Making them was fun from the get-go. I've been making videos since I was a young kid just for fun. I had an old YouTube channel that nobody knows about because I made all the videos private. Me and my best friend in Chicago used to make YouTube videos. They were about a minute long. They were really dumb—just stuff I recorded on my iPhone 3. I didn't edit them, I just filmed them and uploaded them. Then I saw Vine and made videos there and they ended up taking off.

When your Vines started taking off, did the success change your self-perception?

I always had self-esteem. I always believed I could make something great out of myself. Vine got me closer to that realization, that what I do can help people.

You definitely inspire people—especially because your early successes happened while you were in recovery.

That was probably the lowest point of my life. I was in so much pain. I went from a really low point to the highest I've ever been. I'm still shocked that I was able to do it.

What makes a good Vine?

Are you close with anyone in the Vine community?

I'm close with a lot of people! I have a lot of good Viner friends. A lot of them actually live in my apartment complex, too. I live in this building where pretty much everyone lives. All the Viners, really: Sam and Colby, King Bach, a lot of Viners.

It's like a dorm for all the Vine celebs?

Yeah! Everyone moved in at different times but everyone knew this was the place to be at. It's part of Los Angeles, in West Hollywood.

When did your PEOPLE web series start?

That started November 2015. They approached us. We did three episodes. Now, that I've moved to L.A. from San Diego it's going to be hard to do family stuff. I'm going to college out here too. I'm studying film. I want to make my videos and edit them a way a film student would edit them, so it's better quality.

One of the bigger pieces of news that broke during your PEOPLE series is that your sister came out as transgender. What was that transition like for you?

I'm learning a lot still. I'm new to the LGBT world. It's new to my family. We've got a lot of research to do. I'm learning what to say and what not to say.

With so much of your life online, does it ever feel overwhelming?

Of course. The best way to deal with trolls, a lot of people say to ignore them but trolls are trolls, they will come back into your life. The block button is a really helpful tool that I use time to time. All you have to do is block them. Then they're gone. I don't pay too much attention to them, but if it's ongoing trolling everyday, obviously you don't want to have that.

What advice would you give someone if they wanted to start doing what you do?

Don't try to copy someone else's style. Everyone is big for a reason, because they have their own style that people are not used to. If you want to do comedy, relatable comedy is really what thrives best on social media.

What are the best and worst parts of being popular online?

The best is that it's introduced me to a lot of great fans and friends. It helped me realize my own potential. Probably the worst thing about it is that my life will never be the same, in a good sense and a bad sense. When I signed up for social media, I had no idea that my life was going to change forever. I never got to say, "Hey, let me do some stuff before." I'm grateful for that, but at the same time, I wish I had time to experience my life before social media.

But I'm way more grateful that social media changed my life. I would not be in my apartment building, on this phone, talking to you today if I did not make that one video.

When you're not taking over the Internet, what do you like to do?

I love video games. I'll play tennis and swim. I hang out with friends.

What kind of music are you into right now?

I really like Frank Sinatra and Michael Bublé. That's my go-to music in the morning. I got into it a few days ago and I've already made a couple playlists.