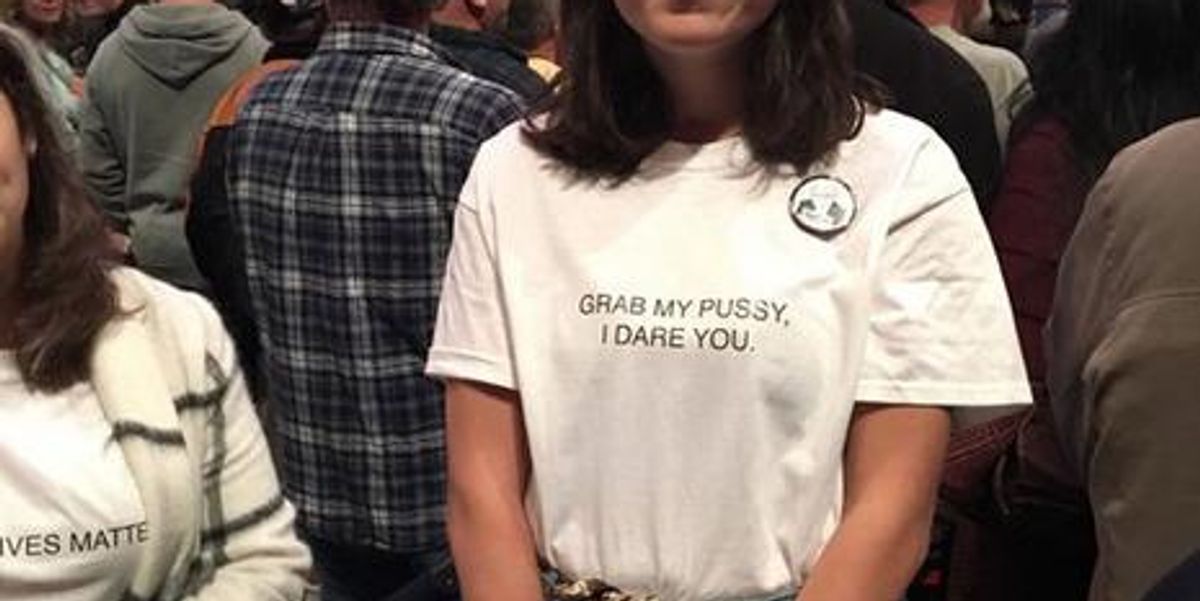 Anne Lehane, an 18-year-old high school student, decided to take Trump's ghoulish "Grab 'em in the pussy" remark from that eternally damning 2005 audio that was released Friday, and flip it on its ugly, faux-haired head.

As Daily Dot reports, Lehane, and her two friends, Noah Frace and Erin May, headed to a Trump rally in Wilkes Barre, PA yesterday, donning "Black Lives Matter" protest shirts, as well as Lehane's tee that stated "Grab my pussy. I dare you."

The three stood against the hordes of Trump devotees, making their presence known:

fudge donald trump and his minions. they have been sent here to destroy us. vote 4 Hillary pic.twitter.com/YOfuxPatZG
— noah (@trap_lawdd) October 11, 2016

Lehane told Elle the shirt was a reaction to Trump's overall message of oppression:

I felt disillusioned then with the opinions of [Trump] and any woman who supports him. You can't control how I vote by grabbing my whatever. The fact that I'm a woman doesn't mean that I'm easily influenced or controllable or someone who shouldn't be taken seriously.

The shirt, unsurprisingly, attracted some goblins:

There were a lot of weird comments by creepy old men. One man, he looked to be my grandfather['s age], honestly, he said 'I always like a good dare.'

The teen hero, who is still a Bernie supporter, added that while Clinton isn't her first choice, in this current race, she's the right one:

[Hillary] stands for women and I stand for women.And Bernie Sanders supports Hillary now–I'm not just basing my opinions on him, but I think Hillary is definitely the better choice for the President of the United States.

At that same rally, this also happened: