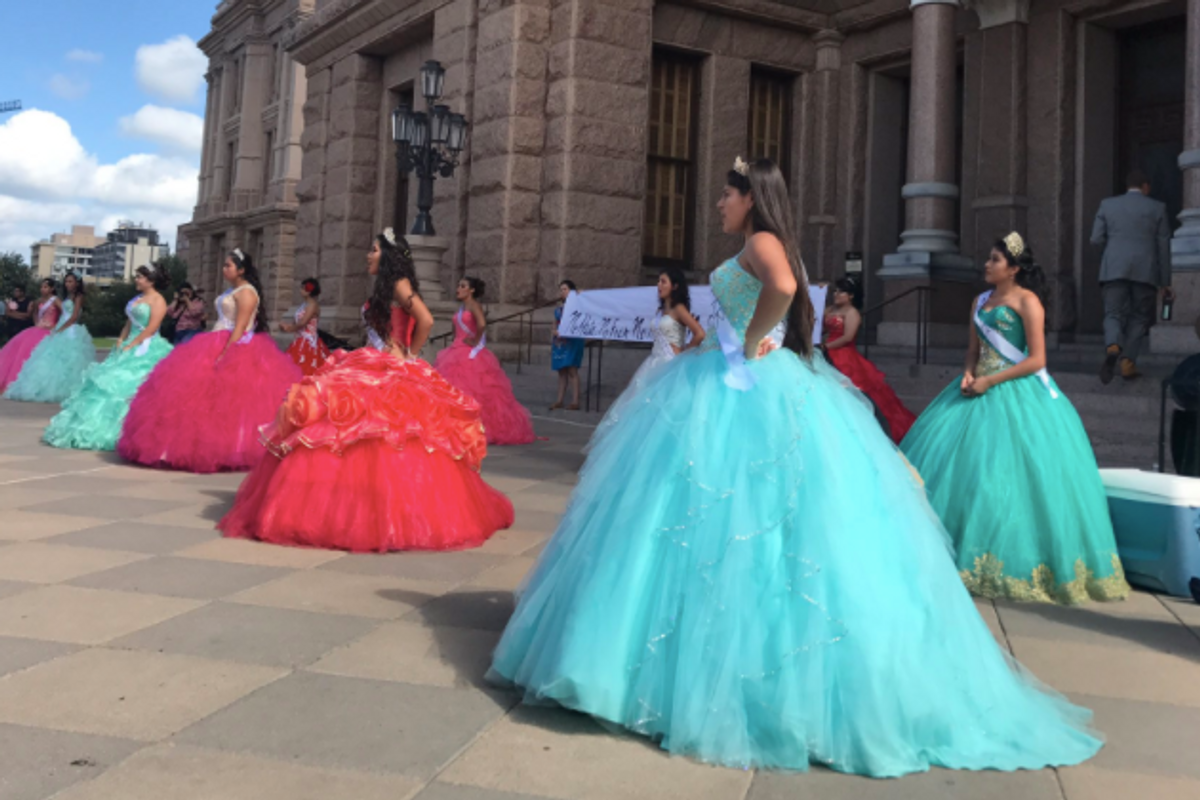 What's better than exercising your civil right to assemble and protest? Doing so in your floor length quinceañera dress and a tiara, obviously.

A group of 15 teenage girls gathered outside the Texas State Capitol yesterday to protest Senate Bill 4, a discriminatory and controversial bill that targets sanctuary cities by allowing law enforcement to question people about their immigration status if they're arrested. Activists fear the measure is a virtual green light for racial profiling, as even minor infractions like jaywalking could lead to higher arrest rates of Latinx and brown people in general. The bill was signed into law in May by Governor Greg Abbott and goes into effect in September.

The young women rallying yesterday know that optics are important, and chose to wear quinceañera dresses to highlight their pride in their heritage. (A quinceañera is a traditional coming of age party for a Latinx girl's 15th birthday). A post on the Facebook page of the Latinx advocacy group Jolt, which organized the event, said that quinceañeras "highlight the bonds of family, community, culture and bring people together through celebration."

17-year-old protester Maggie Jaurez explained to NPR that "using [this] quinceañera is showing that as an adult and as a Latina, we are responsible in voicing those who cannot speak for themselves in the moment."

At the rally itself, Juarez said, "The bottom line is, SB4 makes simply being brown illegal. When Governor Greg Abbott signed the bill into law on May 7, he disrespected my community. He put a lot of Texas in danger. SB4 is not only an attack on immigrant communities, it threatens the lives of all people of color."

The girls met with Texas lawmakers after the rally to discuss the harmful impact the bill would have on their communities and gave flowers to the ones that had spoken out against it.

"This last election, we saw Mexicans and Latinos demonized and really scapegoated," Jolt founder Cristina Tzintzun told Fusion. "And so we want legislators to know and Trump to know that we won't sit idly by while legislation of hate is passed, that our communities are going to organize and mobilize."