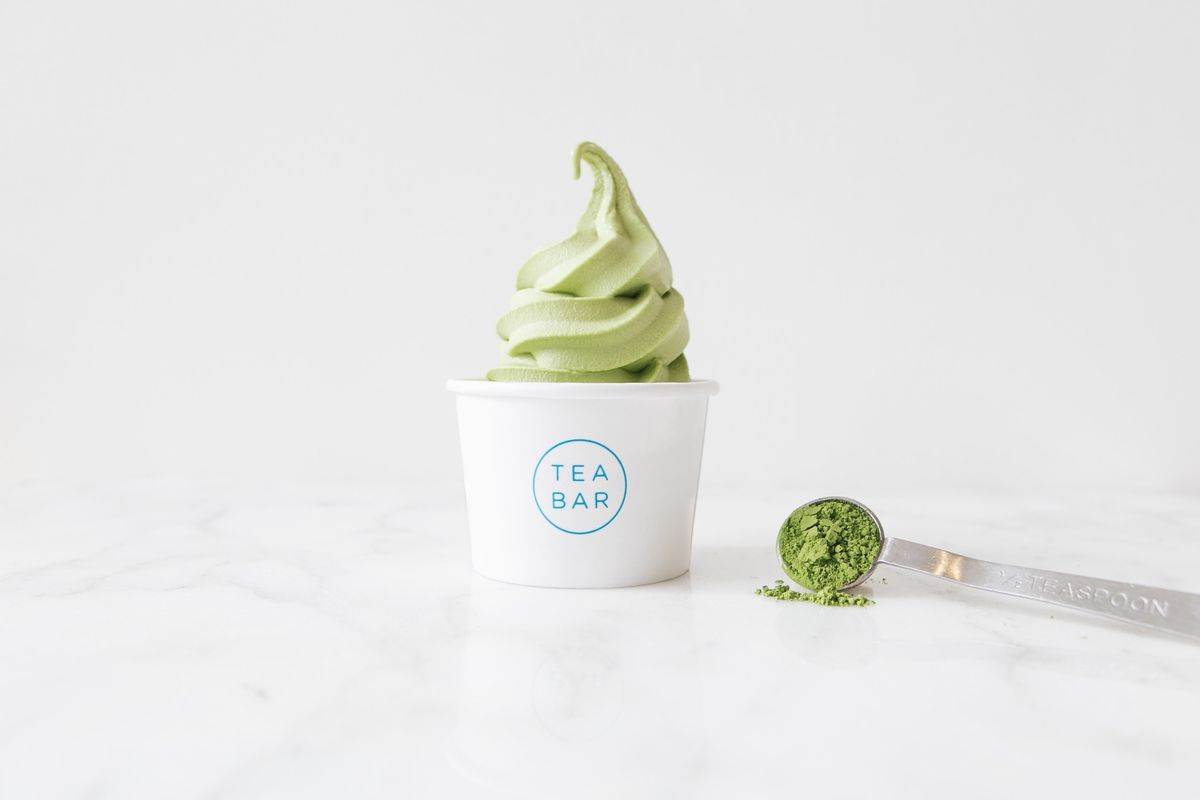 Last summer, when I traveled to Portland, Oregon for the first time, my friends insisted on taking me to Tea Bar, a specialty tea shop run by PDX native Erica Indira Swanson. The moment I walked into the NE Killingsworth Street location, I knew I'd found my home away from home.

Inside, it never feels too crowded because there is just enough space between the wooden tables and chairs that are carefully placed around pots of large leafy plants. Paired with the white walls, concrete floors and natural table tops with fresh flowers on display, Tea Bar's atmosphere always feels open and inviting. Swanson likes to keep it minimal, which speaks volumes to her customers.

In addition to being the CEO and founder of this fine establishment, Swanson creates and develops all of the tasty recipes featured at Tea Bar. "I love cooking and am a perfectionist," she says. "Sometimes it will take weeks, sometimes even years for us to perfect a recipe. I have aimed to keep our menu as minimal as possible, so that it isn't overwhelming. We carry a variety of premium organic teas that we source from all over the world."

Oftentimes when trendy cafes serving niche teas blow up, there tends to be a disconnect between the owner and the culture itself. Matcha is the latest beverage to go through the cycle of appropriation and there will certainly be more drinks that follow it in the future. Prior to Swanson's current role, though, she spent her teenage years living in China.

Throughout her childhood, Swanson traveled across the globe to third world countries with her father. By the time Swanson was 16, she was fluent in both Spanish and French, but had the desire to learn how to speak Mandarin. Rather than provide books on the language, Swanson's father encouraged her to move to China and fully immerse herself in the culture. During that period, she lived with a Chinese family and attended a Chinese school.

"One of my biggest takeaways from living in China was seeing everyones work ethic," she said. "Kids there get to school before 6 AM and stay past 6 PM. It is unreal. It was certainly very inspiring and drove me to always want to work hard as well."

It was here that Swanson was exposed to a traditional tea culture and her informal training of the craft began. After she returned from China, she started working with her father on expanding his property management company Little Beirut Properties. Coffee shops can be found in practically every corner of Portland, but Swanson noticed there were limited options for tea. The millennial realized a unique opportunity had presented itself, and in 2014, Tea Bar was born.

Swanson is currently working on building the fourth Tea Bar location. At the moment, she doesn't plan on expanding outside of Portland (but fingers crossed that she'll consider it someday in the future because the Big Apple could certainly benefit from her business). "So far, we have grown very organically and I want to continue to do that," she says.

We spoke to Swanson to learn more about how she became a tea expert.

My childhood story is a long one, and one that entirely shaped me into who I am today. When I was five years old, my Dad and I moved from a beautiful farm outside of Portland into the city. My Mom suffered from health issues and moved to Hawaii when I was four years old. My Dad looked at moving us into a house in one of Portland's nicer neighborhoods, but instead he bought Finer Court and we moved into one of the small two bedroom apartments. This is a choice that for years I didn't understand, but looking back I am so grateful for.

Growing up with such diverse families was so insightful to cultures different than my own. Since my Dad was a single father, we spent a lot of time together renovating apartments, fixing leaks, attending business meetings and open houses for our apartments. I saw firsthand how hard my Dad worked and learned about so many aspects of business from a very early age. When I was a teenager, I began showing apartments on my own and started to run much of the business [Little Beirut Properties] when I moved back from China.

How has tea made an impact on your life?

I drink tea everyday. It is one of the first things I do in the morning. Matcha is my go-to! I am very driven, and think about so many things. The amount that I juggle is sometimes just insane. Tea helps to calm and focus me. Coffee feels more agitating and gives me a feeling of anxiousness. Tea all the way.

What are some of your favorite teas, right now?

My favorite teas are our ceremonial matcha that we source from a family farm I visited last Fall in Uji, Japan. I also love our golden milk, dirty detox, and ginger lemon tea toddy.

Tea Bar is only three years old, but why do you think it has been so successful from the start?

At Tea Bar, we do things a bit differently than a lot of other shops. First off, our interior is quite a bit more modern than the tea shops you are normally used to seeing so often. I have Swedish roots so our shops are naturally quite Scandinavian in design. We have a lot of white, natural wood along with plants and fresh flowers. Our drinks are all made fresh to order. We never used processed powders or syrups.

I heard that you only employ women at Tea Bar. Is this a policy?

We do not have a policy that requires we only hire women. We have hired men in the past, but currently our team is both woman owned and women led. I am so proud to lead a team comprised of so many hardworking women. In so many industries, women are placed only at the front of the house or on register but are rarely found making the products. At Tea Bar, I empower my team to practice every role.

What is your philosophy as a boss?

My philosophy is to always be kind. Whether that is collaborating with a nearby new business to help raise awareness, going above and beyond to take care of a customer or growing a team member. We are here to take care of our customers, our team and our neighbors.

What do you want customers to take away from Tea Bar?

I want customers to come in and to ultimately feel relaxed and taken care of. I want our customers to feel that tea is approachable. It doesn't have to be intimidating.

What do you do when you're not busy running Tea Bar?

I practice hot yoga 4-5 days a week. I love cooking, watching the TV show Suits, spending time with my dog Ponyo and traveling.

Continue sharing tea as a daily beverage with more people. Travel more. Be able to do a press handstand in yoga. Invest more in cryptocurrency.