A little acknowledged Taylor Swift fact: for her entire career up until the recent Lover era, your favorite country-pop crossover star was technically an independent artist. She signed with Nashville's Big Machine Records aged 15 ("When you're fifteeeeen"), and over the next decade became one of the best-selling musical acts of all time. The man who discovered and signed her, supposedly after catching an open mic performance at Nashville's star-making Bluebird Cafe, was Scott Borchetta.

As of Sunday, Swift and Borchetta are at war. This is somewhat surprising, as they've always enjoyed a publicly amicable relationship, even as Swift left Big Machine for Universal last year after fulfilling her contractual obligations there. Swift's now angry because Borchetta just sold Big Machine, which retains ownership over her valuable master recordings. The buyer? Ithaca Ventures, holding company of music management mogul Scooter Braun. Braun is the guy who gave us Justin Bieber and Ariana Grande — he was also Kanye West's manager during 2016's notorious "I made that bitch famous" controversy. According to an angry Tumblr post that Swift wrote over the weekend, Braun taking ownership of Swift's catalog is her "worst case scenario."

Is any of this actually worth getting upset about, or does Swift need to take her own advice and calm TF down? There's a lot to unpack, so let's dive in.

Why do master recordings matter?

Masters are everything. Just ask the Universal execs who covered up the accidental destruction of thousands of master recordings for more than a decade. Controlling the masters means controlling the copyright, and over time this is incredibly lucrative. Which is why artists increasingly try and retain ownership of their own music — as Prince once told Rolling Stone, "If you don't own your masters, your master owns you."

But record labels are tough negotiators, and while it's shitty that Swift doesn't own her own catalog, it's not unusual. Although the system is slowly changing, many newly signed artists forfeit rights to master recordings (literally the initial recordings of their music, which are then copied) and receive a bunch of advance money instead. Swift was a teenager eager to live her music dream — even with the support of wealthy parents, she was arguably in a poor position to negotiate back in 2008.

Still, musicians will often receive the opportunity down the line to purchase their master recordings back, and it's not like Swift (net worth: $360 million) can't afford to do this. Right? Right. But things are more complicated than that.

What happened between Taylor and Big Machine? 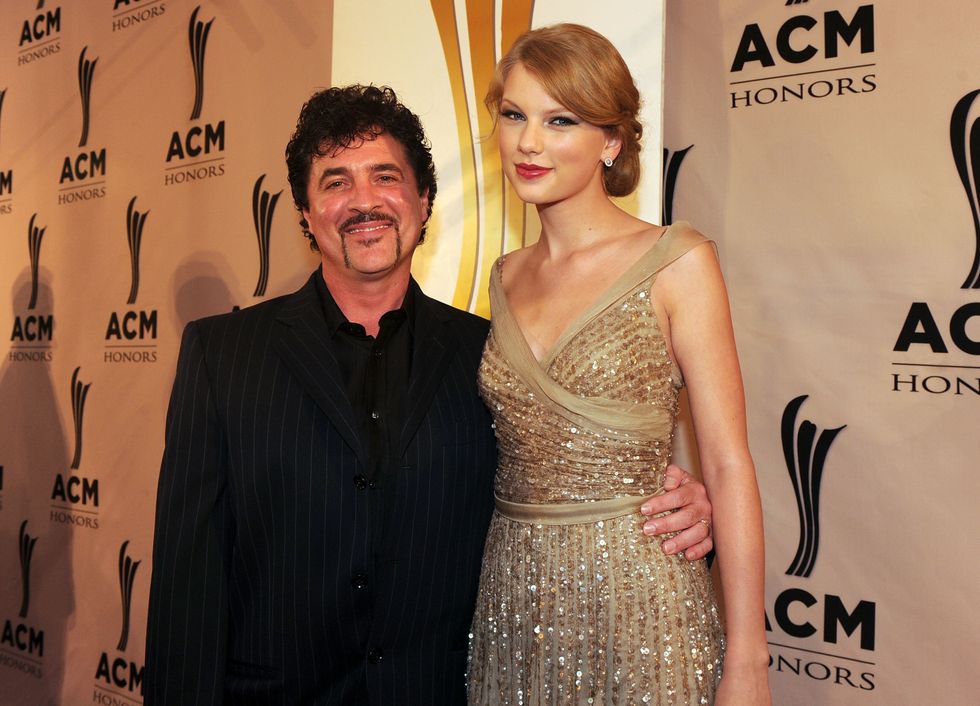 According to her Tumblr post, Taylor Swift has been "pleading" for the chance to own her masters for years. When her contract with Big Machine was up, she alleges the label offered her a cruel deal: "earn one album back at a time, one for every new one I turned in." She says she walked away from the offer because "I knew once I signed that contract, Scott Borchetta would sell the label, thereby selling me and my future. I had to make the excruciating choice to leave behind my past."

Well, the selling thing came true. But Borchetta otherwise disputes Swift's version of events. In a response blog post published on Big Machine's website, he alleges Swift was offered the chance to instantly own all those master recordings if she signed up for another ten years of recording: "100 percent of all Taylor Swift assets were to be transferred to her immediately upon signing the new agreement. We were working together on a new type of deal for our new streaming world that was not necessarily tied to 'albums' but more of a length of time."

Whatever went down, Swift chose to sign with Universal, for a presumably huge sum of money. At the time, she said her decision to go with the major label was swayed by Universal's agreement to redistribute money to artists when it sold its Spotify shares — months later, Universal is yet to let said shares go, which provides another reason Swift might be feeling miffed.

Also relevant: Swift's father, former stockbroker Scott Swift, owns shares in Big Machine. He has been indirectly profiting from her masters for years, and will probably benefit from the company's sale.

"Some fun facts about today's news: I learned about Scooter Braun's purchase of my masters as it was announced to the world," writes Swift in the Tumblr post. This, too, is disputed by Big Machine. Borchetta says he texted her the night before the big announcement, receiving no response. He also notes that her father, as a shareholder, would have been informed of the sale through his lawyer: "I truly doubt that she 'woke up to the news when everyone else did.'"

Right. But Swift's team is now telling People that Scott Swift wasn't privy to the information, per his own request: "On June 25, there was a shareholder phone call that Scott Swift did not participate in due to a very strict NDA that bound all shareholders and prohibited any discussion at all without risk of severe penalty… Her dad did not join that call because he did not want to be required to withhold any information from his own daughter. Taylor found out from the news articles when she woke up before seeing any text from Scott Borchetta and he did not call her in advance."

If she was taken by complete surprise, then Swift's emotional reaction makes sense. Especially as Braun posted a now-deleted story on his Instagram bragging about "owning" Taylor Swift immediately following the announcement, which wasn't a super classy move. Not to mention all their other history.

Why does Scooter scare Taylor? 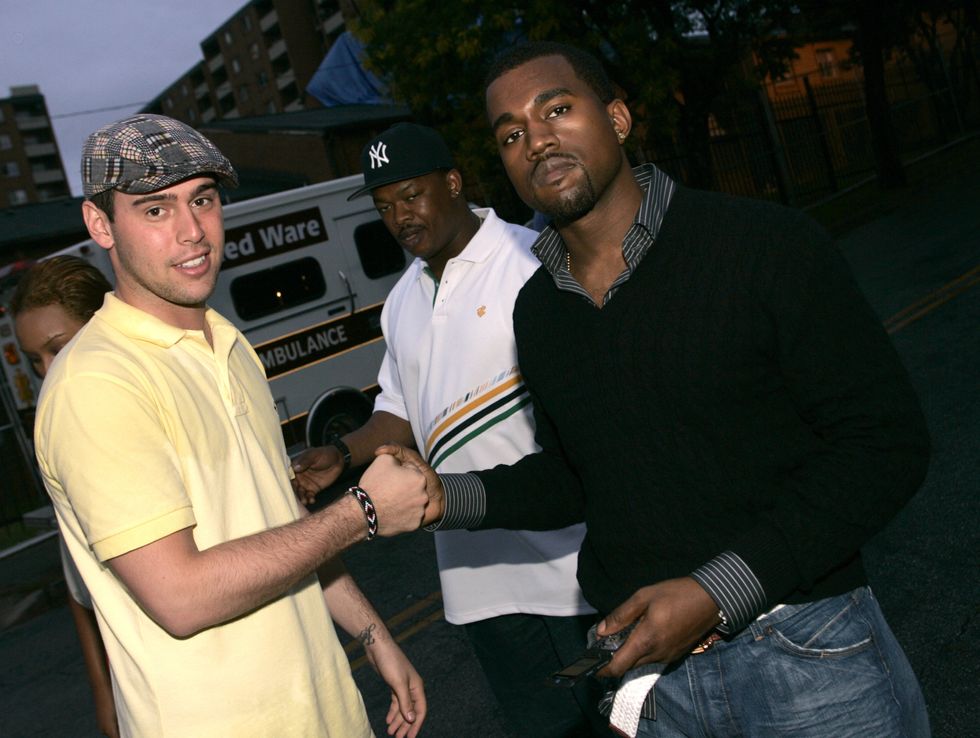 Scooter Braun and Kanye West in 2005

A primer on Scooter Braun: he is rich, powerful, and well-liked within the music industry. This is the man who organized One Love Manchester, coached Grande through an unimaginable trauma, and Justin Bieber through extreme highs and lows. Braun's other artists include Demi Lovato and Carly Rae Jepsen; he stopped managing Kanye West in 2018, but the two reportedly parted ways on good terms.

Swift has known Braun her entire career — she gave his new client Justin Bieber an opening slot on her Fearless tour back in 2010. Their conflict originates with her longtime enemy Kanye West. Braun didn't start managing Kanye until 2015, way after the 2009 VMAs incident where the rapper stole her thunder onstage, but crucially was by his client's side during the whole "I feel like me and Taylor might still have sex/I made that bitch famous" thing. (To be fair, we now know that Kanye definitely called to ask permission before releasing "Famous," but Swift takes particular issue with his use of the word "bitch." She also objects to the use of her naked likeness in the song's video.)

All this pain is compounded by the fact that Swift feels betrayed by Borchetta, her longtime ally. "Any time Scott Borchetta has heard the words 'Scooter Braun' escape my lips, it was when I was either crying or trying not to," she writes. "He knew what he was doing; they both did. Controlling a woman who didn't want to be associated with them. In perpetuity. That means forever."

Borchetta, for the record, says he has been friends with Braun for a long time. He also says he never saw Swift cry when the name came up: "Was I aware of some prior issues between Taylor and Justin Bieber? Yes. But there were also times where Taylor knew that I was close to Scooter and that Scooter was a very good source of information for upcoming album releases, tours, etc, and I'd reach out to him for information on our behalf."

Where does Justin Bieber fit into all this?

Oh, you thought master of messy Insta captions Justin Bieber wouldn't weigh in on the drama? Please. Bieber apologized for the incident of social media bullying Swift described on Tumblr, calling it "distasteful and insensitive." But he, like Borchetta, also claims that Braun likes Swift and supports her. "One thing i know is both scooter and i love you," he writes. "I feel like the only way to resolve conflict is through communication… Neither scooter or i have anything negative to say about you we truly want the best for you. I usually don't rebuttal things like this but when you try and deface someone i loves character thats crossing a line."

How have other musicians reacted?

Aside from Bieber's, the most interesting reaction comes from Swift's friend and fellow musician Todrick Hall. Hall, who was formerly managed by Braun, tweeted his support of Swift on Sunday: "For those asking, I left Scooter Braun a long time ago…I am saddened by this news, but not shocked. He is an evil person who's (sic) only concern is his wealth and feeding his disgusting ego." Then: "I believe he is homophobic & I know from his own mouth that he is not a Swift fan."

Demi Lovato, who also posted an Instagram story supporting Braun, responded in Hall's comments section: "Hey boo, idk you or anything and this isn't hate, but making claims that someone is homophobic is really serious. Please don't spread information that isn't true because I can guarantee you Scooter isn't. As a member of the LGBTQ+ community myself, he wouldn't have signed me if he was. No hate just trying to clear that up."

Meanwhile, Hailey Bieber was supportive of Bieber in his comments section, and Braun's wife Yael defended her husband on her own grid. Kacey Musgraves and Kendall Jenner both liked Yael's post.

What do stans think?

The Swifties are incensed right now — #WeStandWithTaylor has been trending on Twitter for almost 24 hours. One stan, Alex Boubia, has created a Change.org petition to "make Taylor Swift re-release her 6 albums" with new vocals, so she can own those masters. Boubia claims that Braun only purchased Big Machine so he could discredit her old work and let his "own artists rise and shine happily ever after." Numerous people are signing the petition under fake celebrity names, like "Katy Perry" and "Troye Sivan." It's mayhem.

Who are we meant to believe?

The optics of Scooter Braun buying out Taylor Swift aren't good, but it's difficult to know where the truth lies. Braun is yet to comment on the situation at all, except for deleting the aforementioned Instagram story brag where he'd screenshotted a friend's congratulations.

You can't help but wonder if this is less about personal grievance, more about money. Braun made a good business decision, first and foremost — no one pays $300 million out of pure spite. And Big Machine has artists other than Swift! Hello, Reba! A businessperson herself, it makes sense for Swift to be jealous that she didn't sign a similar deal.