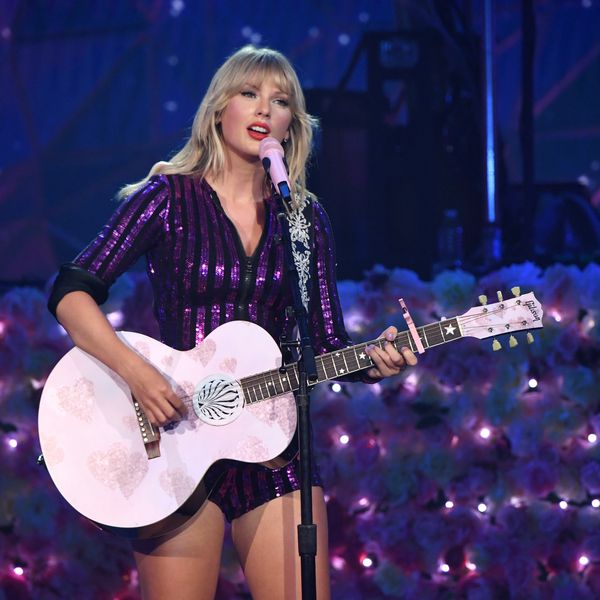 Anyone doing a free one-month Amazon Prime trial thing at the moment? You're in luck, and can watch a brand new live Taylor Swift performance in full, right here. For everyone else, here's a summary: the singer/songwriter maybe shaded her nemesis Scooter Braun during the show, which took place last night in New York. It was Swift's first public appearance since their weirdly complicated beef hit headlines, and her first-ever performance of new queer-friendly single "You Need to Calm Down."

The whole point of shade is that it's subtle, so this is all open to interpretation. But here's all the evidence that stans have uncovered on Twitter and Tumblr so far.

Swift pointedly bragged about writing her own songs

Taylor Swift on Instagram: “This night is ✨sparkling✨ Thank you @amazonmusic for having me and the incredible @dualipa, @iambeckyg and @sza. Thank you so much for…”

Taylor Swift is a SONGWRITER FIRST, SONG PERFORMER SECOND, AND CAT LOVER THIRD, okay? Her pen-to-paper skills were a recurring theme as she riffed with the crowd between tracks last night, referencing her country music past (AKA her Big Machine days), as well as her power pop present. "One thing that has been really wonderfully consistent throughout the entire time that I've been making music is that I write all of it," she explained.

Many are interpreting this as a callback to that now-infamous Tumblr post in which she called out Scooter Braun, in which she talks about "music I wrote on my bedroom floor." Writer. She's a writer! A writer.

Related | All the Easter Eggs in Taylor Swift's 'ME!'

The ‘Shake it Off’ lyrics

Twitter went off when Swift finished her set with 1989 anti-hater hit "Shake It Off," which famously addresses itself to "the liars and the dirty, dirty cheats of the world." Swift supposedly placed more emphasis than usual on these particular lyrics, as a kind of coded message to her supporters in the feud.

Shade verdict: I'm going to let this one pass, because "Shake It Off" just is kind of shout-y.

She liked some Tumblr posts

After the Scooter Braun beef broke out, Taylor stayed logged into Tumblr and started "liking" a bunch of Swiftie posts supporting her decision to attack the sale of her master recordings. Now, post-Amazon Prime performance, she's back at it — hitting the heart on everyone's theories that she was talking about Scooter on stage. So that's... pretty much confirmation, I guess.

Say what you will about Swift, but she's good to the stans.