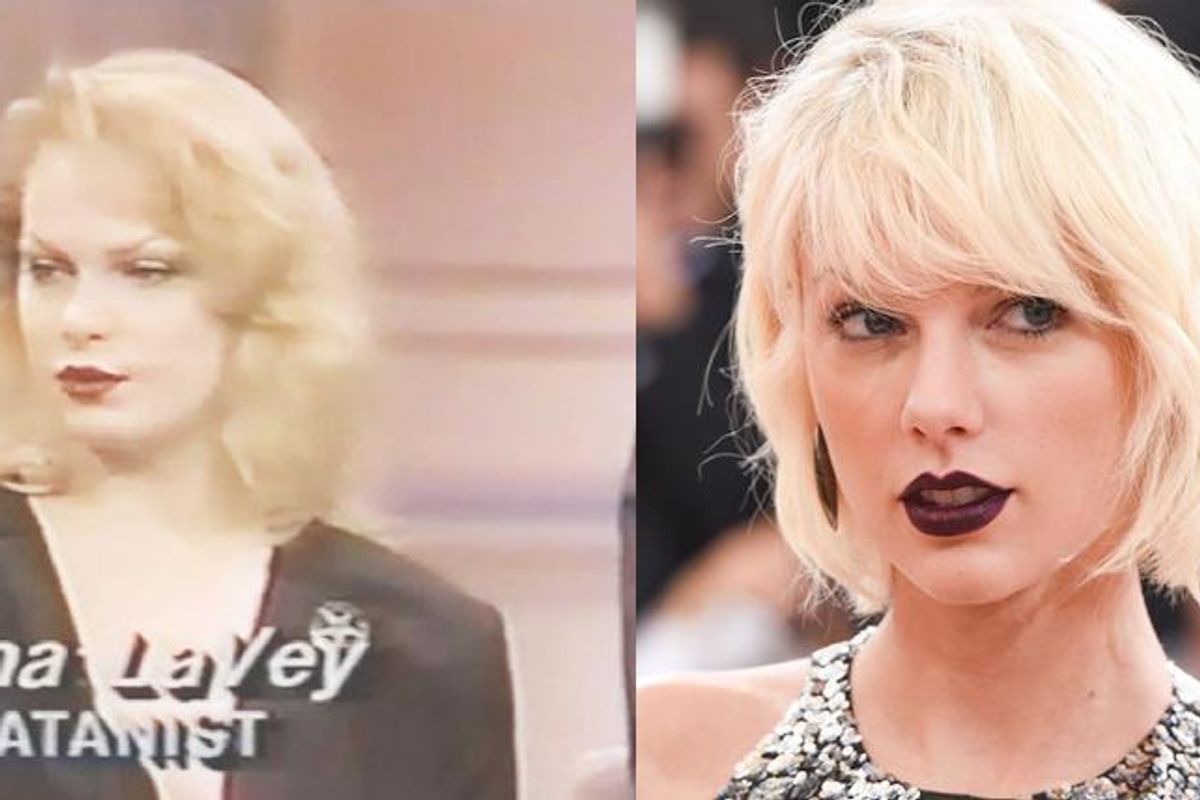 As BuzzFeed is reporting, a truly insane and downright transcendent internet conspiracy theory involving Taylor Swift and the Church of Satan is flaring up across the world wide werb, once again.

The theory supports the claim that Taylor is actually cloned from the DNA of Zeena LaVey Schreck, an American artist/daughter of Anton LeVay--the founder of the Church of Satan; Zeena was the church's high priestess from 1985-1990, before leaving the church to become the high priestess of the Temple of Set, and now a Buddhist (same, though).

This theory has been around for a few years now, with some articles and postings going back to 2013...written on The Superficial, before getting picked up on Reddit (of course).

Of course, multiple, sketchily-made YouTube videos exist to lay evidence for the claims that Taylor is some sort of Illuminati/Satanism-hybrid experiment from Hell...

Essentially, the videos seem to disregard the logic of time; that, believe it or not, a human person, including Taylor Swift, can change physically as she ages.

Twitter, not surprisingly, is running back into the T-Swift clone fog with opens arms, because why not?

TAYLOR SWIFT IS A CLONE. BRO THIS IS BRAZY
— Sumner (@sumnerrobinson) September 9, 2016

What else do we have to do these days.

I'm 100% ready to believe that Taylor swift is the clone of a satanist
— trash lasagna (@sydney_valdens) September 9, 2016

The general consensus seems to fall in favor of said-cloning.

Taylor Swift is actually a clone from a famous Satanist
— GoT Enthusiast(s) (@BestGoTScenes) August 31, 2016

I mean, so many lols.

daily reminder: taylor swift is a clone of a satanist
— yazmin (@niazmastani) August 29, 2016

Taylor swift is hot...too bad she was created by the US govt as a satanic lizard clone to help control the minds of millions of Americans
— yeah boy (@ratchetpatrick) August 26, 2016

harry dated taylor swift and taylor swift is a clone of zeena lavey who was a satanist which means taylor believes in satan
— 🌹 (@craicful) August 23, 2016

Some have tied in the Kim K snapchat ssssssscandal...

Waiting for an official statement by the Church OR Clone Tay.